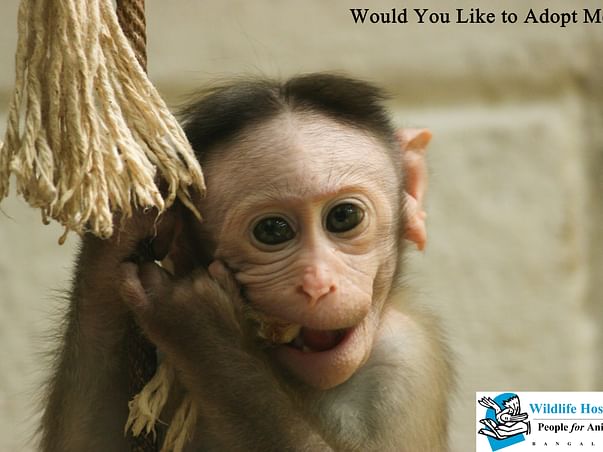 Share
Elizabeth is a 12-year-old macaque, who in a tragedy lost her sight. Beaten attacked and blinded Elizabeth is a bearer of hope at PfA. She was strong and fought her way back to prime health in 3 months, but her vision deteriorated and she was rendered blind. Not letting her blindness burden her she began sharpening her other senses. On an experimental basis orphaned neonates who were struggling without a mother’s care were introduced to Elizabeth. Lo and behold Elizabeth and the young ones got along and they were inseparable. This is just a case of Elizabeth who has fostered many young ones successfully.
At the pace at which population of humans has exploded and has eventually led to encroachment of forest land which are being converted to human habitations, tremendous assault is being caused to a huge number of species of urban wildlife leading to conflicts between humans and wildlife, especially the macaques, leaving them with no choice, and as the rule goes- “Survival of the fittest”, Bonnet Macaques (Monkeys) get into human habitations for satisfying their basic need of food and shelter.
PfA, Bangalore, rescues a large number of macaques which, due to their arboreal nature, come in contact with electric wires or high tension cables which results in serious injuries. Such monkeys are rescued and given immediate medical attention. Unfortunately, a few macaques which cannot sustain the injury go through an amputation of their limbs. Owing to their disability, these macaques lose their instinct of being able to survive in the wild and remain in PFA’s care for their lifetime.
Sometimes due to dog attacks or road accidents a female monkey ends up losing its life, leaving its young one orphaned. Such orphaned babies are rescued and hand reared until they are old enough to depend on themselves and rehabilitated along with other monkeys. The orphaned neonates are fostered by a few macaques which are kept with us in our lifetime care like Elizabeth or Nanny (Two macaques which were blinded by an acid attack and a car accident to whom neonates were introduced to on an experimental basis).The two have nurtured and fostered many orphaned macaques which are later released into a socializing enclosure. The socializing enclosure is an area where the monkeys form a troupe of their own, establish their own hierarchy and form a unit, after which they will be released into the wild.
In order to provide a healthy future for these macaques we require your support in nurturing and enriching them. Please help us to give them a life they deserve and make their way back to the wild.
Break of Funds for the 35 Macaques for 8 to 12 months.