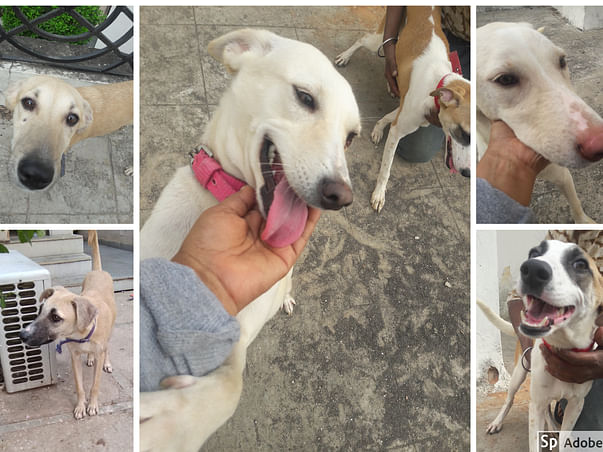 Share
Lily was a pup herself, not even a year old, when she was dumped, heavily pregnant, near a mall in a crowded market in Vasant Kunj, New Delhi. Terrified, she hid in the engine room of the basement parking of the mall where she gave birth to 7 little puppies. Lily was skin and bones when a rescuer spotted her and started feeding her with food and multivitamins. The mall management wanted to throw Lily and her pups out but the rescuers pleaded with them to let them stay on till the pups were old enough to be weaned. Mother and pups were very weak and it was a terribly polluted environment for them along with the added danger of careless, speeding vehicles.

Eventually, under constant pressure from the management to have them moved and no safe place to move the mother and pups to, the rescuers moved them to a boarding.
In the meanwhile, two of Lily’s pups found loving homes, but there were none for her and her 4 other kids - Snowy, Zsa Zsa, Zorrolina and Sparky.  Disheartened at the attitude of Indians towards our own native breed, one of the rescuers wrote to Meredith Allen, a kind hearted American rescuer who had previously helped rescue and rehome several desis from the streets of India to the US. She put them in touch with Marianne Cox of Street Dig Hero and guess what!! Marianne said she would be happy to welcome all five of them with open arms if we could find travel buddies for them!!!

Meanwhile, they had been living at the boarding for almost 5 months and had to be moved suddenly due to unforeseen events. In the duration that we were looking for a suitable long term boarding, in an act of desperation, they had boarded at a new, less than suitable boarding somewhere in Gurgaon. This turned out to be disastrous – all the pups contracted severe bacterial gastritis for which they had to be given IV medications twice a day for two weeks. Those were a harrowing couple of weeks as Sparky, Snowy and Zsa Zsa showed the most severe symptoms. Zorrolina while ill, had the mildest attack, however weakened from the illness, she contracted tick fever and later a mild bout of kennel cough. Snowy caught the cough too but we’re happy that they have now all completely recovered and are on a rich, recuperation diet and supplements so they can regain their strength.
Now, after 8 months of waiting filled with mishaps and misfortune - Lily and her kids need your help to get them to the US.
below
The flight expenses are posted below  - every little bit helps so please open your hearts to help  them get to their homes in  the US. Love and gratitude from Lily, Snowy, Sparky, Zsa Zsa and Zorrolina <3