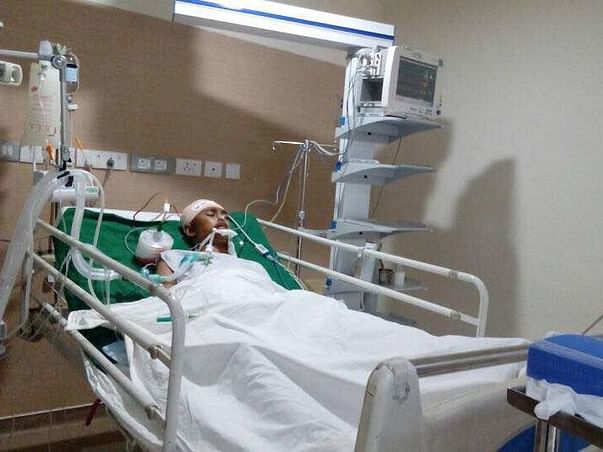 It was his 2nd day of 2nd PUC. He was crossing the road to get to college when a Qualis hit him. Now, he is fighting to stay alive, to live the rest of his life. Everything changed for this family in that minute.
17-year-old Abhishek was looking forward to this turning point in his life. Losing his father 2 years ago to a fatal accident left a deep impact on him but he was moving on. After this year, he would get one step closer to creating a good future for his family. Apparently, fate had different plans. As he was crossing the road that day, a car hit him and everything turned dark.
“The driver rushed him to Jalappa Medical College where he was immediately admitted to the ICU. The doctors noted that he had a blot clot in his brain, and said medicines would take care of it. They did not evaluate his entire condition at the time. Later they discovered he had a crack in his pelvis and thigh. Also, his condition was deteriorating. They asked us to move him.”
Abhishek was born with a disability in his limb. He carried his limp with a smile. The accident had not only injured his brain but also caused a trauma to the same limb. It was imperative to treat both. As his condition deteriorated, the family tried calling various hospitals. He was manually ventilated while taken to Manipal.
“We were pumping oxygen into him, literally holding his life in our hands. So many hospitals were turning us down and Manipal was the only one that opened its doors. We could not afford it, but it was his life at stake.”
Abhishek needed an emergency brain surgery to care for the trauma. He was moved into the MICU and is on the ventilator. He is still too critical to go back into surgery for the fractures. He has a swelling in the brain that should subside and needs time to recover.
“Without a father, his mother is struggling to run this family. She has two younger sons to care for. They had a small business for which the father had to drive out and toil all day long to make Rs. 10000. She cannot take over. We are about 6-7 cousins who are helping them out right now. We thought we could set up a small shop for them, and right when we thought things were falling in place this happened. It feels like misery is following us. He is just a boy. We just want him to recover.”
Your contribution can help save Abhishek's life. He has a long future ahead of him, and a family to care for. He lost his father to an accident, let's help Abhishek survive this one.