Ironing Man’s 2 Children Are Suffering From Severe Liver Disease | Milaap
This is a supporting campaign. Contributions made to this campaign will go towards the main campaign.
This campaign has stopped and can no longer accept donations. 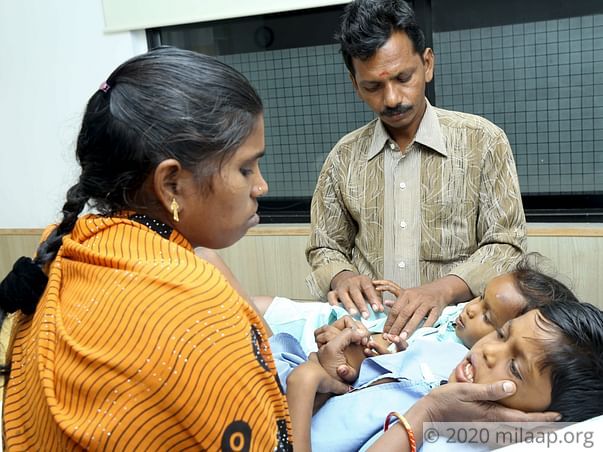 Ever since his son Bharath (6) was diagnosed with a severe liver disease within days of his birth, Murugan and wife Kala have been dedicating their lives to keep him alive. They chose to buy his expensive medicines over spending money for their own basic personal needs, like getting new clothes or new house supplies. With every passing day, Bharath’s eyes and body became more yellow-tinged and the fear of losing him grew manifold in his poor parents’ hearts. When Kala was pregnant again, she only prayed for him or her to be healthy. But unfortunately, Baby Kantha Vel (2) was also diagnosed with the same liver disease his brother was suffering, and now with 2 sick children and no money to save them, Murugan is waiting desperately for help.


“They can only be saved with liver transplants costing Rs 18 lakhs each, but I don’t even have Rs 18 in my pocket right now,” says Murugan.

‘Bharath has lost the ability to walk and is very critical, we don’t want Kantha to suffer like him‘

When Bharath, Murugan and Kala’s 2nd child was born, they remember telling each other how cute and healthy he looked. Now, they think they may have spoken too soon as within 5 days of his birth, he was diagnosed with severe jaundice and needed phototherapy for a few weeks. “Every time we would come back home from the hospital, he would get sick all over again – he would stop drinking milk properly and cry uncontrollably,” recalls Murugan, adding, “He had to live with the yellow eyes and yellow-tinged skin from that point; it never got better. He was surviving on medicines and tablets and even went to school for 3 months. But after that, he stopped walking completely. He began vomiting continuously and now spends most of his time in bed, weak and restless.”


Baby Kantha Vel has the same symptoms as his brother when the latter was his age, but he is having food properly and even acts like a normal kid. “Our biggest fear is that when Kantha becomes Bharath’s age, he would stop walking as well. We cannot let that happen. We need to get them the treatment they deserve, but where is the money?” asks an inconsolable Kala.

Murugan irons clothes for a living in his hometown of Villupuram, earning Rs 200 a day. A train ride to Chennai for the children’s check-up costs Murugan Rs 400 – double of what he earns. As he can only afford unreserved tickets, his sick children have to stand for most of the 3-hour journey, unless kind strangers offer to give them a seat. Murugan is well aware that time is running out, but he is completely helpless. – “Bharath is eating lesser and lesser every day and medicines aren’t helping him. Little Kantha has not even started having medicines, as we can only afford medicines for one. We have also not been able to pay for the tests to determine whether my wife or I can be the donor,” Murugan laments.

Bharath and Kantha Vel are brothers suffering from the same liver disease that will kill them both if they do not undergo liver transplants. Bharath is very critical and has lost the ability to walk and also his appetite. He is suffering silently, while Kantha, who is also suffering from persistent jaundice, has all chances of landing in the same condition, in a few years’ time. 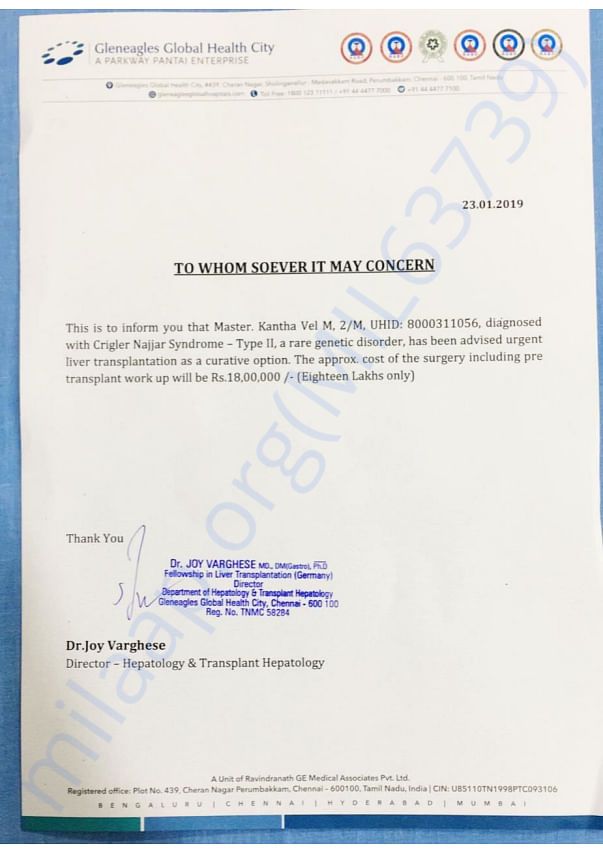 We are glad to share with you that Master Kantha Vel underwent successful Living donor Liver transplantation with us on 28/03/2019 and discharged from the hospital in a stable condition. He is better now, and is visiting the hospital for a regular checkups and he’s going back to normal.

We have some good news and bad news to share with you. The good news is that Kantha Vel is better now, we are taking him for regular checkups and he’s going back to normal. However, we regret to inform you that Bharat has passed away. After we got Kantha Vel's transplant done, the doctors wanted to wait as Bharat was showing signs of improvement, then his condition worsened and there was nothing that could have been done.

Thank you all once again for your support and love. Please pray for Bharat’s soul to rest in peace.

Kantha Vel is doing well. Patient successfully underwent Liver transplant and is recovering now. The patient is on post-op follow up. We shall keep you posted.

Regards,
Srini Ganesh
Load more
Donate
Report fundraiser
See how thousands are crowdfunding for their causes on Milaap
Content Disclaimer: The information and opinions, expressed in this fundraiser page are those of the campaign organiser or users, and not Milaap.
If such claims are found to be not true, Milaap, in its sole discretion, has the right to stop the fundraiser, and refund donations to respective donors. 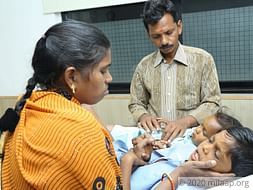