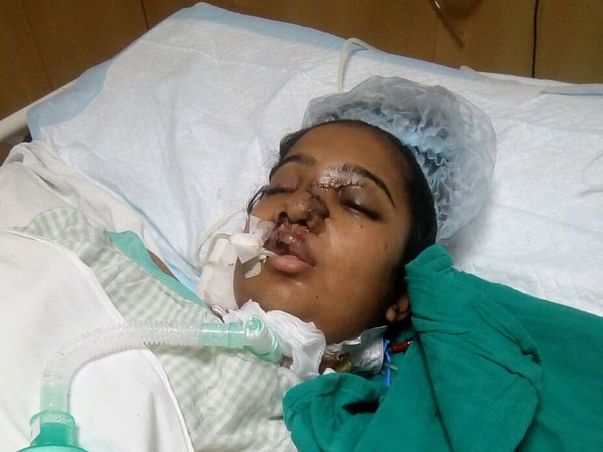 Share
Kanishka, a 19-year-old girl from a self-contained residential colony in Delhi, is fighting for her life while lying unconscious in the B.L. Kapur Hospital after suffering from serious injuries to her head. On New Year’s Eve, she was thrown off the 4th floor of a residential building, following a dispute with her friend. As her family prays for her recovery, their financial situation makes it hard for them to deal with the never-ending medical bills.
Kanishka has spent the New Year at the hospital
Kanishka was with a friend who she trusted, and after an argument, he physically assaulted her and threw her off the 4th floor of a residential building. On hearing the screams and cries, the neighbors were able to capture the assailant.
She was admitted to the hospital at approximately 9 p.m. on 31st December 2017. Her parents weren’t aware of this and found her directly at B.L. Kapur Hospital where she was unconscious and her life is still hanging by a thread.
Falling from the 4th floor is no joke and it’s a miracle that she’s still alive. But there’s a high degree of uncertainty of her condition. She is suffering from a life-threatening brain hemorrhage, multiple fractures of her nose and legs, and broken ribs. She is also finding it hard to breathe and is assisted by a ventilator.
Her family continues to hope for the best
“The neurosurgeon said that patients in this state (Kanishka’s condition) don’t generally recover but her heartbeat is still normal. They told me there’s no telling when she would regain consciousness. These are extremely tough times but we’re hoping for the best”, said Prabhu Vishwas, Kanishka’s father.
Kanishka has remained unconscious for nearly 2 weeks but her heart rate is still a little bit above normal. This has been the only source of hope for her father, Prabhu and the rest of her family. Even after she regains consciousness, there’s much to be done. Her face has been cut open in multiple places and she requires surgery to make things right, physically.
Prabhu said, “The doctors tell me every day that it’s impossible to save her but she did show little signs of improvement and her heart is still functioning normally. I’m just praying that she will be able to open her eyes in the next few days.”
Kanishka’s family are in dire need of help
Prabhu worked as a chauffeur and earns just Rs. 15,000 per month. And his wife works at a tailoring shop earning Rs. 5,000 per month. In addition to rent and other household costs, they have 2 other children.
From the moment she was admitted, Kanishka’s condition has been critical. In just a week, Prabhu was handed a bill of approximately Rs. 8 lakhs which he can’t afford even if he and his wife worked for years. As Kanishka remains in the hospital needing attention every single minute, Prabhu is doing everything he can to pay the rising medical bills by reaching out to multiple resources.
The bills are estimated to reach Rs. 20 lakhs in the next few days and Prabhu and his wife have no means to pay such a high amount.
In addition to the surgery, other fractures and injuries on the rest of her body will require rehabilitation as well. Thus, apart from constantly worrying about his daughter’s life, Prabhu needs to find a way deal with the never-ending hospital bills.
“Kanishka is so intelligent. She is pursuing her B.A. degree and is in the second year. Not only does she study hard but also finds time to help my wife with household errands. She cooks, makes tea and helps her 13-year-old brother with his studies as well. We just love her too much”, said Prabhu, who sounded really upset.
How you can help
Kanishka is battling for her life and her family is constantly praying for her to regain consciousness but have no financial means to deal with the stacking medical bills.
Your contribution will not only help Kanishka get all the treatments she needs but also help the family save her life.