Kabir Bansode needs your help to undergo his Bone marrow transplant | Milaap
This is a supporting campaign. Contributions made to this campaign will go towards the main campaign. 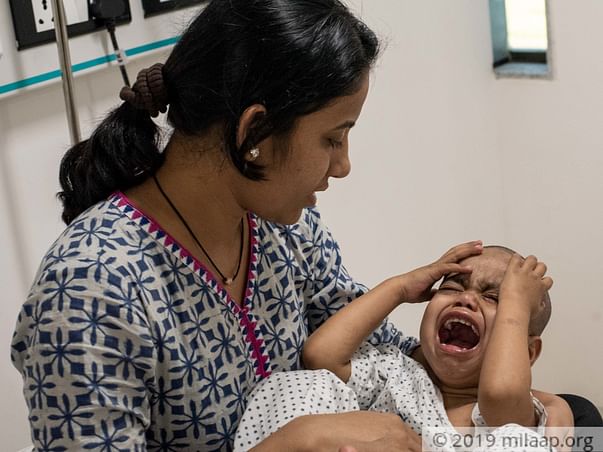 In the one hour that Kabir gets to be outside his home, all he wants to do is go around the city and watch everything – it’s one of the things that makes him immensely happy. But as he senses that it’s time to go back home, a sadness sinks in. “Can we stay out for a few more minutes, papa?” he pleads, and they take the longer route home because they know that it’s going to be weeks before he can leave the house again - unless it’s for another blood test at the hospital.

Kabir with his toy bat while playing inside the house

“Because of his disease, he can’t do anything that other children can. He’s confined to the house. He even plays cricket with his small plastic bat inside the house with his older brother. My husband borrows his friend’s car or bike, and we take him around occasionally. He goes weeks without ever stepping out, and the only time he leaves is to go to the hospital. Sometimes, when he’s cranky, he says “mumma, let's go to the hospital” because it’s his only way for him to leave the house.” – Suvarna, mother

Kabir with his parents and brother, before his condition deteriorated - a rare outing

Kabir was diagnosed with Wiskott-Aldrich syndrome a year ago. It is a life-threatening condition due to which the child is at the risk of getting severe infections. This also leads to easy bruising, bloody diarrhoea and episodes of prolonged bleeding. Before this, he fell sick so often, and his parents took him to many hospitals. Several blood tests and months of struggle later, his condition was diagnosed. No medicine can cure him of this disease, and his only hope is a bone marrow transplant at the earliest.

If one were to talk about Kabir’s life before he was diagnosed with Wiskott-Aldrich Syndrome, it would be hard to find a day in which he has not struggled. A sickly child since birth, Kabir has been in and out of hospital ever since he was just 3-months-old. Burning with fever and relentless cold, Kabir has spent many nights in the hospital – more than he has at home. But growing up, he found joy in the little things like playing with his older brother, his toy cars and the drives around his city, Pune. However, this life isn’t even close to the one his parents want for him.

“We just want to see him smile. I wish we could say that he was so active and happy before this, but this has been his whole life till now.” – Suvarna

Years of struggle can end with the transplant, but they can’t afford it

Suvarna and Ganesh have been trying to afford his bone marrow transplant for nearly 10 months now. However, after spending almost 15 lakhs over the past two years, there’s no way for them to afford the 33 lakhs on their own. Suvarna had to quit her job at a private company last year to take care of Kabir, and Ganesh works as a contractor in the furniture business. However, he goes weeks without working, desperately trying to collect the amount of Kabir’s treatment.

“We’ve sold whatever jewellery we had, used all our savings. Now we have nothing. We can't afford the one thing that can save our son's life.” - Suvarna

How You Can Help Little Kabir

Kabir needs a bone marrow transplant at the earliest to fight this dreadful disease. There isn’t a day where his life is not at risk. All his parents want is for him to have a ‘normal’ childhood, one he’s never had the chance to live. Kabir can have that chance with your support. 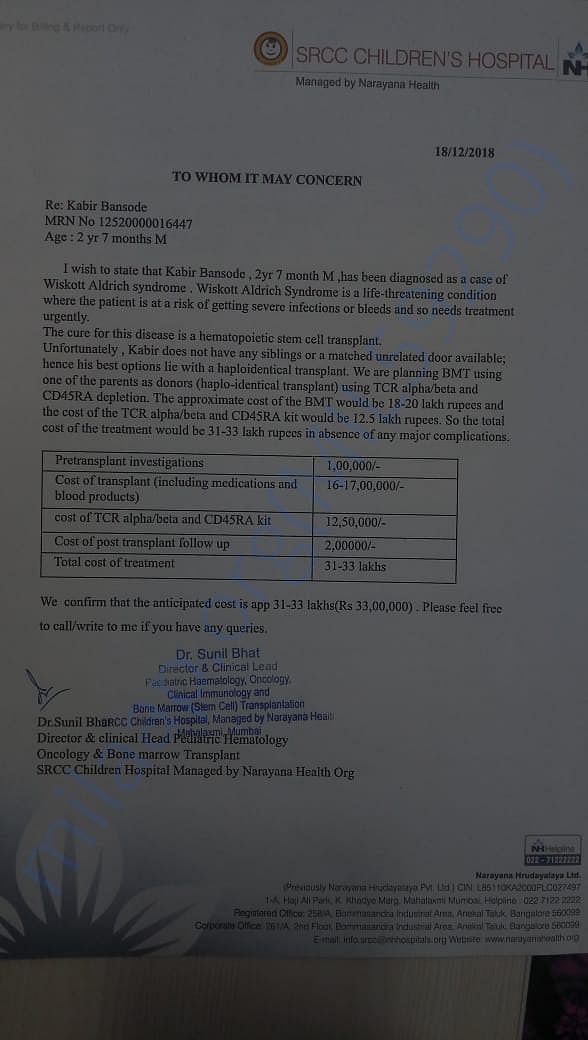 Kabir successfully underwent the bone marrow transplant in April and he is presently on post BMT treatment and follow up. Thank you all!

I am grateful for all the love and support.

Kabir is presently at home and doing well. He has to undergo a few tests after which the date for the transplant will be fixed.

Please share the campaign and pray for his health. Thank you!

Thank you for your tremendous support for my son Kabir.

He was discharge from the hospital and is presently resting at home. He visits the hospital for regular check ups. A while back he had some infection due to which his blood platelet count fell, but soon he recovered with treatment. His father has been identified as the potential donor.

We want thank all of you once again and request you to share the campaign so that can go ahead with the transplant. 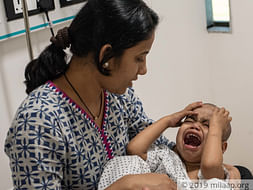