This journalist became a farmer to change the face of his village. | Milaap
This is a supporting campaign. Contributions made to this campaign will go towards the main campaign.

This journalist became a farmer to change the face of his village. 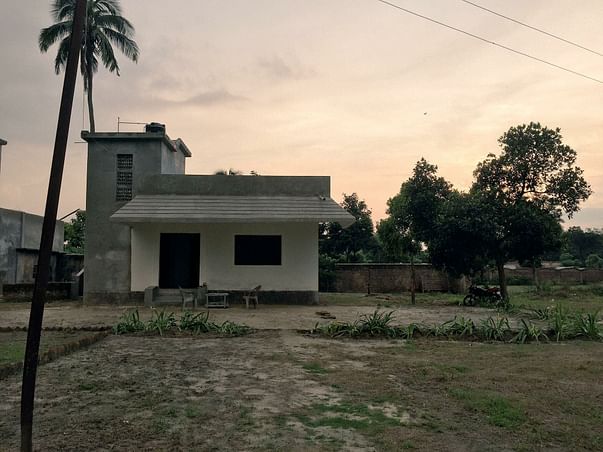 A journalist, a writer, a well-known name on the internet! So what made this man leave the spotlight and become a farmer in a remote village?
This story is about Girindranath Jha from Chanka village in Bihar’s Purnea district.
Girindranath was born in the same Purnea district where Padm Shri Fanishwar Nath Renu, the writer, was born. He was an avid follower of the writer and himself began writing stories related to village life quite early.

However, Girindranath’s father never wanted him to become a farmer like him, and tried his best to keep him away from Chanka.
Girindranath needs funds to develop Chanka Residency
Girindranath, who has planted around 1,000 Kadamb trees so far in the village has built Chanka Residency. Amidst this wonderful space, he has made a little house by pitching in all his savings, and named it Chanka Residency.
The visitors who come here can enjoy the fresh weather of a village with lush greens, have traditional meals made by the villagers and listen to some soothing tribal music.
The first guest of Chanka Residency was British-born American Ian Woolford.
Girindranath now wants to develop the residency to accommodate at least 10 guests at a time, which would require an investment of around Rs 10 lakh.

He also wishes to open a rural museum in Chanka, which will have all the farming equipment used by our ancestors, tools used by the tribal community that are on the verge of being extinct.

Girindranath Jha with his father
In those days, Girindranath would live in a hostel to study and come home only on holidays. He would find numerous stories there that made him find solace in the village.
“I love writing stories since childhood. And you can say that villages have lot of raw material for writers. But even though I belonged to a village, my father never let me live in it. May be this was the reason why I always longed to live in a village,” says Girindranath.
Girindranath finished his graduation in economics from Delhi University’s Satyawati College in 2006. In the following years, he obtained a fellowship from the Center for the Study of Developing Society (CSDS) and did a post graduation course in print media from YMCA, Delhi.
He then worked for 3 years for IANS news services, New Delhi.

In 2010, he married Priya, a BCA graduate from Delhi University, and shifted to Kanpur to work for a national news agency.
Life was good, Girindranath and Priya were at the peak of their careers. But somewhere within, there was still something missing. Girindranath used to tell his wife how he wished he could live a simple life in his village and also do something for it.
There was a dream shaping up in his mind for his village since 2006 when he finished his graduation. But like any other father, Girindranath’s also wanted him to be successful in life and take up a job. This stopped him from living in his village but he kept planting Kadamb trees whenever he visited Chanka.
It was finally in 2012, when Girindranath got a call about his father’s brain hemorrhage that he came back to Chanka and never went back.

Girindranath became a farmer in 2012
Priya supported him fully on this decision. And the love story that started at a café in a posh Delhi mall landed up in the lush green farms of Chanka.
But this couple enjoyed every bit of it.


The narration of this sweet transition is well elaborated in Girindranath’s book, Ishq Mein Mati Sona, which was launched by the famous journalist Ravish Kumar and became a bestseller in Hindi.

Girindranath soon turned into a full time farmer, but continued to write for newspapers like BBC-Hindi, NDTV, Dainik Jagran etc. He was living the life he always craved for. But his dream of connecting cities to villages was still unfulfilled. This was possible only by attracting rural tourism, for which the first thing he wanted to do was stop villagers from migrating to cities.
People left their natives only for one reason, and that was work. To help give them work, Girindranath offered his own land to farm on a partnership basis with the landless farmers.
The trend turned successful and now many villagers work on this idea.

The other reason farmers were losing their land was alcoholism. To eradicate this problem Girindranath started educating the children of the villagers about the ill effects of alcoholism. He made them watch documentaries and informational films based on this issue. Once the children were educated, they would tell their mothers about it and Girindranath would empower these women to fight against their husbands’ addiction.
Thus, slowly, there was a revolution in the village. The women who had never been out of their houses had started revolting. And within two years the village became addiction-free.
The first issue of migration from villages was resolved. Now the question was this: how would urban people who prefer to spend their holidays abroad get attracted to villages?

Girindranath has planted more than 1000 Kadamb trees in Chanka
“We have a misconception that a village is a sad place. However it is the same as cities. Don’t you people get disheartened when you don’t get your incentives? Aren’t there ups and downs in the lives of urban people? It’s the same with villages. There are ups and downs, there is sadness but there is fun as well. You need to experience that to know your villages,” says Giridranath.
The first chance of inviting the urban to the rural came to Girindranath while he was attending a conference by UNICEF in Patna. Girindranath talked about how the children in Chanka were so excited about the ideas of documentaries and short films and requested the members to conduct the children’s film festival in his village instead of a metropolitan.
The idea clicked, and for the first time ever, UNICEF conducted the children’s film festival in a remote village like Chanka.

UNICEF Children’s Film Festival 2015
The film festival exposed the world to Chanka, which was until then an unknown, tiny village. The media, politicians and scientists, everyone turned towards it. Within a year Chanka had electricity and roads.
Girindranath continued to invite writers and bloggers to Chanka and would do a social media meet there.

He also kept telling the world about Chanka through his blog Anubhav, which was awarded as the best Hindi blog by ABP News and Delhi Government in 2015.
To make the urban public, especially the artists, stay and work in Chanka, Girindranath has now started a residency project. 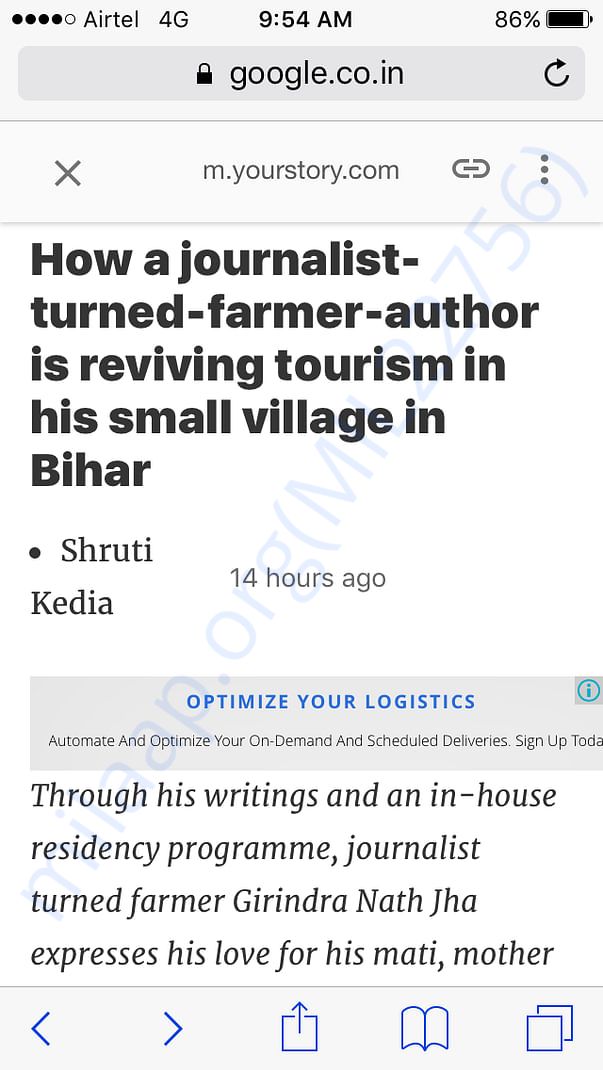 Hi everyone, Chanka Residency’ construction work is going on. With your help we constructed an open stage platform.
Thank you for the support so far, please continue to share the campaign with your friends and family and help us finish this at the earliest.
Dear supporters,

Here is an update on Chanka's residency.
Chanka Residency’ construction work is going on. The funds received from your side has been utilized to make bathroom and kitchen. We need more funds for further construction.

You are sending a message to
REENA RANI
Go back 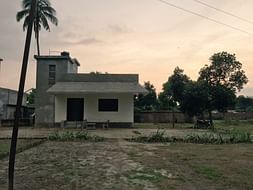 This journalist became a farmer to change the face of his village.