This 3-year-old Has Only 24 Hours To Live And Needs Your Help | Milaap
This is a supporting campaign. Contributions made to this campaign will go towards the main campaign.
This campaign has stopped and can no longer accept donations. 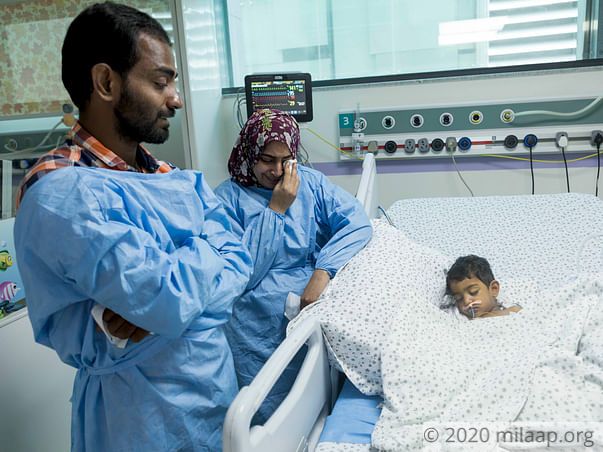 “In the next 24 hours, if he doesn’t get the transplant, he will go into a coma and die. He hasn’t spoken a word or opened his eyes since the past 3 days.” – Feroz Khan, Toukir’s father, while weeping uncontrollably.

Feroz and his wife, Tahseen by Toukir's side, who is unconscious

After suffering severely from jaundice, 3-year-old Toukir Khan’s liver has completely failed. He is extremely critical and has only 24 hours to live unless he undergoes a liver transplant immediately. His father has been matched to be a suitable donor but he has absolutely nothing left to provide for the surgery. Now, he is running out of time to save his dying son.


Toukir, when he was normal and healthy

Residing in rural Maharashtra, Feroz and his wife, Tahseen, rushed their 3-year-old baby to a local hospital but his condition kept getting worse by the minute. Finally, they got him to Hyderabad to provide him the medical attention he needs.

“In just 4 days, we got to know that his liver was completely damaged. Just thinking about how fast all these things happened is shocking.” – Feroz

Now, due to acute liver failure, the 3-year-old baby is slowly dying. He needs to undergo a liver transplant urgently to have hopes of survival.

Toukir has been unconscious since the past 3 days

“Every Sunday, he loved going to different gardens and public parks. He didn’t know his condition was so bad and 3 days back he told me ‘Papa, please take me to the garden’. Those were his last words. He isn’t opening his eyes or listening to me anymore. He is alive but unconscious for 3 days. My wife and I have just been next to each other crying every minute. I hope God doesn’t do this to any child or parent.” – Feroz, while weeping

Now, since his liver has stopped functioning, the 3-year-old is battling for his life and just hanging on by a thread. Without the transplant, the doctors had said that he still had 20% chances to make it out of this. Now, he has 0% chances of survival unless he gets a liver transplant.

Only a liver transplant can save the 3-year-old baby

If Toukir gets a liver transplant in the next 24 hours, he can still recover completely. His father has been matched as a suitable donor but he has nothing left to provide for the transplant. He has exhausted all his resources and now, he and his wife are in dire need of help.

Feroz is racing against time to save his dying son

3-year-old Toukir has just 24 hours to live and Feroz is running out of time to arrange the funds needed to help his dying son undergo a life-saving liver transplant.

Hailing from rural Maharashtra, Feroz works as a laborer and earns a meager salary every month. His wife, Tahseen, is a homemaker. Feroz has spent around Rs. 3.5 lakhs to keep his son alive until now. He has spent all his savings and asked everyone he could.

“My family has also given me all that they had. Even if I ask more people now, how can I get help so fast, in such short notice? My son shouldn’t die because of poverty. It seems like he is just left on the bed to die. I feel so helpless but how I can I leave him like that? As parents, I can’t describe what we are going through right now.” – Feroz

The total cost for the liver transplant is estimated to be around Rs. 16 lakhs. Feroz has absolutely nothing left and he has no way to arrange for such a colossal sum in such short notice. He needs urgent help, without which, his son could possibly die within the next 24 hours.

3-year-old Toukir will die in the next 24 hours unless he undergoes an immediate liver transplant. His liver has failed completely. His father is matched as a suitable donor but he has no money to provide for the surgery. He is desperately racing against time and now, he needs your help to save his dying son.

Your support and contribution will save 3-year-old baby Toukir. 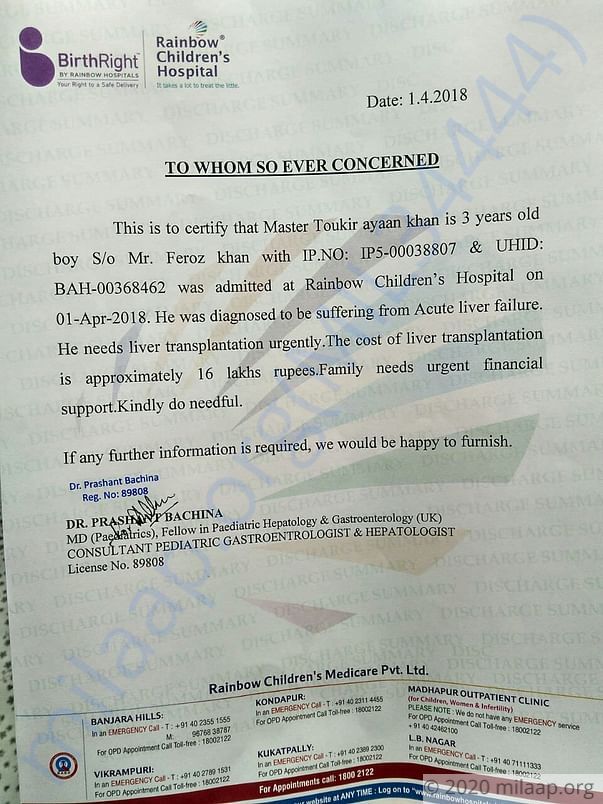 Thank you for the wonderful support that you have shown towards Toukir.

We have received a lot of requests from donors like you asking to transfer the funds to needy patients and recommendations for the same. Please find a few of them below,

Shanmukha Kaushik (https://milaap.org/fundraisers/shanmukha-kaushik) - 9 month old baby, who needs a liver transplant and still requires another Rs 9.5Lakhs to be raised in next 2 weeks.

After April 13th, we'll be initiated automatic refund to the donors.

Thank you all once again for the support and my apologies for the inconvenience with this process.

Our prayers and wishes are with Toukir and his family.

This is Anoj, co-founder of Milaap. Firstly, I'd like to thank you for the wonderful support that you have shown towards Toukir. It means a lot to all of us. However, we have some news to share with you today. Toukir's mother was found to be a more suitable match for him and was going to donate a part of her liver to him.

At Milaap, we release funds raised only against utilization for the intended purpose, supported by treatment update from doctor as well as bills and invoices given to us. Since the intended purpose, ie Toukir's Liver transplant, is not met - we will be refunding your contributions on Friday 13th April 2018. The time gap is only to reconcile all funds received and setting up the refund process with various payment modes.

In case, you would like your donation to be used towards any other patient or cause (complete list here - https://milaap.org/fundraisers ), please reply to this email before 13th April. After April 13th the funds will automatically be refunded back to all the donors.

In case of a bank transfer made to the account number mentioned in the page, we would request you to share the account details with us by replying to the email or reaching out to team Milaap on feedback@milaap.org.

Thank you all once again for the support and my apologies for the inconvenience with this process.

Our prayers and wishes are with Toukir and his family.

Following is the letter from the hospital, issued by the treating doctor Dr Prashant Bachina with contact details to seek more information if required.

Thank you so very much for your overwhelming love and support. We couldn't have come this far if we didn't have you by our side.

It gives us immense pleasure in informing you all that Toukir will now be prepped for his transplant in Global Hospital. The doctors are still working on deciding who the donor can be.

Toukir's mother can be a suitable donor if the tests and thereby, the lab reports suggest the same. However, we are all hopeful and praying for our little boy to recover soon.

Thank you everyone for your constant support. We shall keep you posted on the further developments.

jc
You are sending a message to
jasmit chawla
Go back 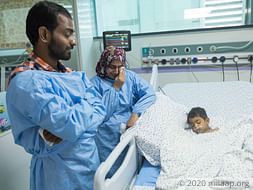