4-Year-Old Says He Is Scared To Die Because His Sister Will Be Alone | Milaap
This is a supporting campaign. Contributions made to this campaign will go towards the main campaign.
This campaign has stopped and can no longer accept donations.
Milaap will not charge any fee on your donation to this campaign. 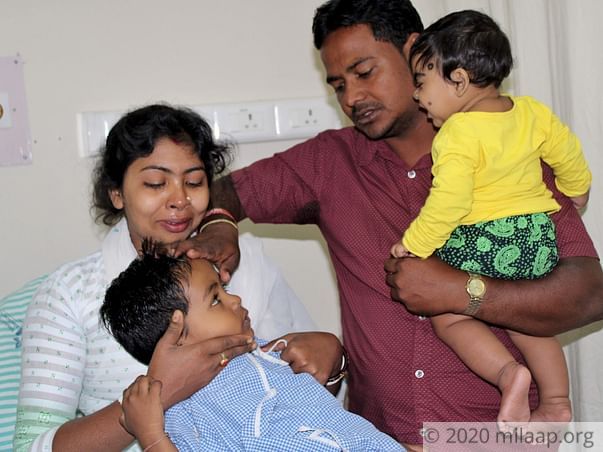 "Will I die, papa? That's why we are not going home, right? Who will Pooja play with when I go. I don't want to die, papa. I will be a good boy. Please, papa." There are the words of 4-year-old Shayan who has been fighting a deadly disease since he was a baby. Doctors told that there is a permanent cure to save his life, but his parents are unable to save his life due to poverty.


Shayan lives with his parents Dumbur Dey and Archana and his 8-month-old sister, Pooja in Bangalore, Karnataka. Shayan was diagnosed with a blood disease a few months after he was born. Since then, this young boy has been surviving because of blood transfusions. Now he is 4 years old and the only time he forgets his pain and becomes active is when he spends time with his baby sister.  When his father, a security guard, goes to work, he looks after his baby sister while his mother manages the household chores.
Shayan with his baby sister, Pooja

Shayan kept his toys ready for Pooja before she was born. We told him that he is Pooja's big brother and he needs to protect his little sister. Since that day, he sits beside her, still she falls asleep, ensures she doesn't put any objects in her mouth. He hugs her when she cries and comforts her"-  Archana

It started when Shayan had high fevers with shivers when he was just 7 months old. His parents took him to a local hospital. After undergoing few tests, Shayan was diagnosed with Thalassemia Major, a condition because of which his body cannot produce blood cells and have an abnormally low amount of red blood cells.

“He coughs blood every now and then. He cannot sleep at night as he gets fits and goes breathless. He cannot even run like other kids. Even a little  bit of walk would tire him easily because of extreme weakness. Every time his skin turns pale and he gets extremely weak, we need to take him to the hospital. I cannot bear the sight of him screaming in pain every time they try to insert needles into his body. I try to comfort him saying that it won’t take long and they’re only doing it for him to get better, so he could go home soon to be with his sister ” - Archana, mother

Earning a meagre income of Rs 300 per day by working as a security guard, Dumbur Dey cannot even afford the life-saving blood transfusions his son needs. He borrowed 8 lakhs from the people he knew, to provide his son with the treatment. Now he has no one to help him.

“I have borrowed more than I can repay. I have nothing left to save my son. We are scared we will lose him even when we know there is an option to save his life- Dumbur Dey

4-year-old Shayan has been suffering since he was a baby. His parents pass each day in fear of losing him. Shayan can be saved with a bone marrow transplant but his poor parents need help. If kind-hearted people come together to support this couple, their son's life can be saved. 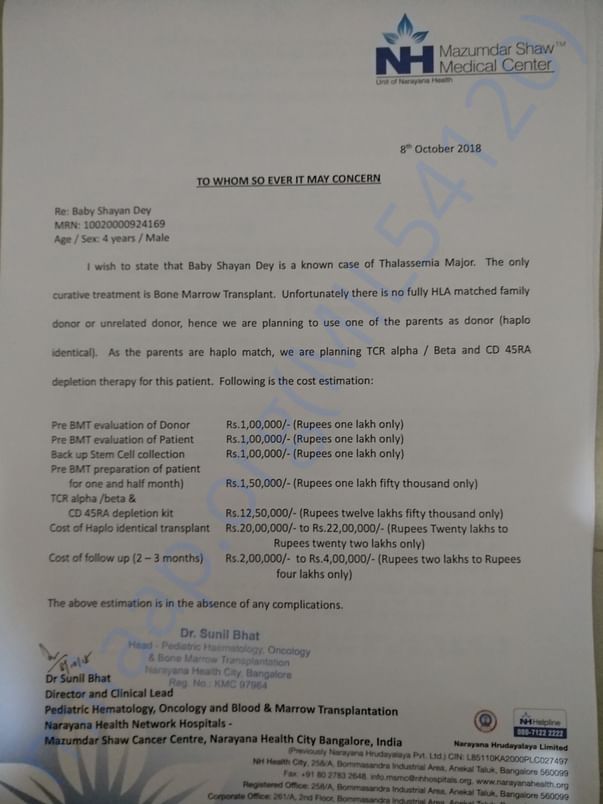 Thank you for all the love and support you have given to Shayan.

He is doing well and going for his regular consultation and check-up.
Thank you for your support.

Shayan is presently admitted for his vaccination. He tolerated the vaccination well and is being discharged in a stable condition.

Shayan is doing well. He came to the hospital for followup checkup and investigation.

You are sending a message to
Shaik Jakir
Go back 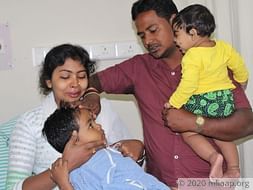