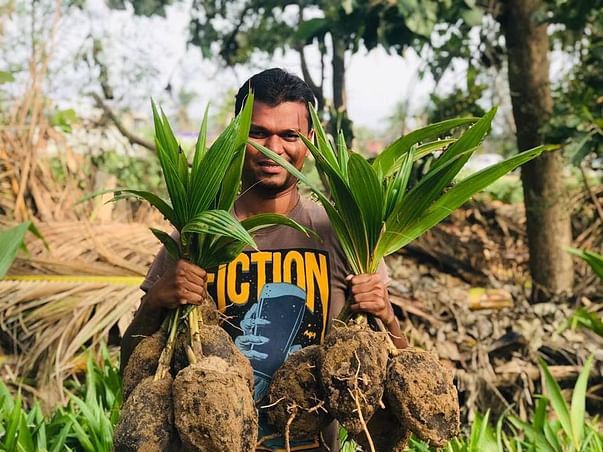 Share
Nimal Raghavan was 31 years old when he decided to put his career of 8 years behind him, and dedicate his life to the betterment of his beloved homeland. He had come home for a vacation from Dubai, where he was working as a software developer in a major bank. He arrived just in time to witness the devastation that cyclone Gaja would leave in its wake.

The worst of disasters often bring out the best in some people.

After Cyclone Gaja devastated the Cauvery delta in December 2018, 31-year-old R Nimal Raghavan of Nadiyam began a series of discussions in villages surrounding Peravurani on reversing the damage.
Nimal has spent the last year coming up with new ways to improve existing conditions for farmers. His efforts have ranged from starting viral social media trends to get people to take action, to conducting awareness workshops.
"Every year we have to beg for water either from neighboring states (for Cauvery water) or from the Gods. We get only 50-60% of what we require, but then of that we end up losing nearly 150 TMC (thousand million cubic feet) of Cauvery water every year in the delta region alone. Because we don't have the proper means of storing and channeling so much water. Through the KAIFA initiative, we want to change this by renovating the reservoirs and local water bodies."
Nimal along with his friends and other like minded supporters visited many villages and united hundreds of farmers to bring about a sustainable solution to about the water crisis the farmers face each year in the Thanjavur and Pudukotai district of Tamil Nadu. Together they formed an organization named KAIFA - Kadaimadai Area Integrated Farmer's Association.
With 70 committed members and 270 WhatsApp members, the association began work on desilting Peravurani Lake, which occupies 564 acres and irrigates 6,000 acres of land. The initial corpus was just Rs 21,000, but as work gathered pace, money started trickling in. To ensure transparency, expenditure details are shared on the WhatsApp group daily.
The key waterbody of this tier-III town, the Peravurani lake, situated about 75 km south of Thanjavur, presented a picture of neglect and misuse. . In less than three months, Nimal and many other youth of the area have helped deepen the lake, raise the height of the bund by 4-5 metres, form a bund on the northern side of the lake and widen the bund. Though the district administration and the Public Works Department (PWD) gave them the go-ahead without much hassle, the youth had to face scepticism from sections of elders in Peravurani and nearby areas. “While some made fun of us, others tried to discourage us, saying we will not be able to go on with our initiative beyond a week, as only the PWD was best equipped to do the work,” says Nimal. But these doubting Thomases relented when they witnessed the zeal with which the youth were carrying out their work. “We felt excited and privileged when the people of the Pongadu and Pazhaya Peravurani villages gave us their contributions – ₹1.8 lakh and ₹1.5 lakh, respectively,” Nimal adds. Today, it is showing signs of a revival, thanks to Nimal and his team of KAIFA.
Since its inception, KAIFA's work has led to the reduction of nearly 60 TMC of unnecessary water wastage. But they have a long way to go. They are now targeting the renovation of Grand Anaicut Canal itself, the primary source of Cauvery water for the delta region. If they succeed in their attempts, hundreds of villages in the Thanjavur and Pudukotai district area will receive ample water throughout the year, with significantly less water wastage. "Once that happens, and the fields start flourishing... and then harvest time rolls around... everyone will start appreciating our motherland the way she should be. That's all I want...", Nimal says.
Article in 'The Hindu" covers the work done by Nimal and his team:
Efforts of local youth raise the hope of a bumber crop

With your help, Nimal and his KAIFA team will be able to rejuvenate the big lake Peravurani and also clear up the Grand Anaicut Canal which has the potential to changes the lives of thousands of farmers in Tamil Nadu.