Let's Help This Farmer's Family To Survive | Milaap
This is a supporting campaign. Contributions made to this campaign will go towards the main campaign. 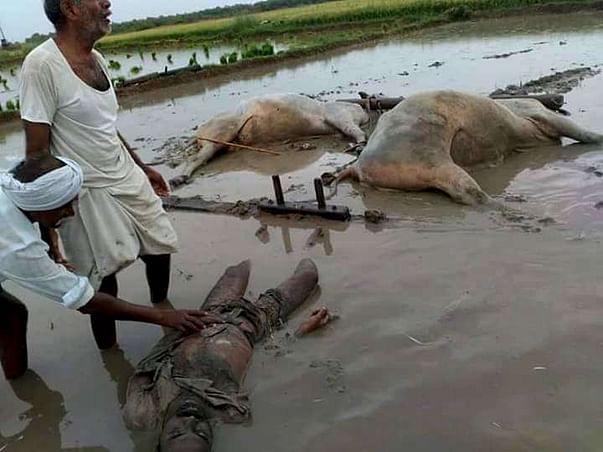 Who is producing food for our Nation? It's a FARMER only!  Nowadays we are responding and supporting even for such a small cause, why can't we respond and help a family who lost their primary family member and the only income source; a farmer died along with his cattle in the farm land itself while working. It may come under a merciless god's act, but still, we are human beings to feel the sadness.
This pathetic incident occurred at Kamalapuram village of Kadapa district in the state of Andhra Pradesh. The victim is the farmer Mallikarjun Reddy, who died along with his cattle on the farm because of the thunderbolt. He is illiterate and also poor enough. He was feeding his dependents solely based on daily wages getting by plowing others farms with the help of his cattle. He borrowed the money and bought the cattle for his survival. But the merciless God took away both the cattle and farmer.

Now his family is on the road including old age parents, his wife with two daughters; they have no source of income. Apart from that he borrowed some amount and bought that cattle.  They have not received any help or support of the government. Honestly, I feel so sad of this incident. Everybody showed so much of mercy and expressed their condolences, but nobody helped them. Then I decided to help them out.... I personally helped them whatever I can. But still, I feel it's not enough for them to survive and resume their normal life... that's why I'm here to raise funds for their lives speedy recovery by establishing an income generating source, i.e., a small General Store or Kirana Shop.

The fund raised through this campaign mainly will be utilized for:
1. Establishing an income generating source for them(General/Kirana Store)
2. His elderly parent's medical expenses
3. His children education expenses
So, dear supporters/contributors those who want to join and support my campaign can join. Nothing we will lose if we support for a social cause! Common friends...  contribute for a noble cause and prove our humanity!

The entire contributed amount will be donated to the victim's family in the form of a cheque, and the same will be updated on Milaap.
And, finally thank you very much for Milaap for elevating social causes in such a unique way!
Ask for an update
Donated to this campaign via Paytm or bank transfer? Click here if you have not received an email confirmation from Milaap.
Hi all,

Thank you for your support. The farmer's family is doing good now. They are successfully running a small general store through which they are earning and spending on their childrens education, elders health and household purpose. But, they still have the bottleneck situation, because it's not yielding much profit.

Whenever I could find time, I used to visit their family and enquire about their welfare. They expressed a lot of thanks to each and every one who supported for their survival. As Mallikarjun's father is experiencing some health issues, it became difficult for them to spend the money earned on store. But we have no other options. They have little difficulty in managing the the things. Anyhow, they have come out of such a deep difficulty and started a new life because of all your help. They felt emotional and expressed gratitude to one and all who helped them in all the ways possible.

Without your support I couldn't achieve this. It gives immense pleasure to thank one all for your support. Have a great day!

All the things are now on a right track. The new store that we are going to open is getting ready. Hardly it will take two to three weeks of time, as the work is in progress.
By this month-end, we are going to bring commodities required for the general store from Metro Cash n Carry as they are better and low in price compared with others.

As our campaign is 80% successful, the main portion of the fund raised is used to run the store i.e., the working capital and the remaining for the elderly medical expenses.
There is one more pending responsibility that is their children education expenses. Here I'm very happy to annouce that I'm going to bear the entire amount of the school/college fee of their children(both) for one year which will be around Rs 80k.

Let the store be run for one year so that they can get financial stability. After onwards, they can take care of themselves which is our main intension and goal.

I personally should say "Thank you very much" to each and everybody those who made this campaign grand succes and given their valuable suggestions.

Thank you very much for your great support. I'm sorry for the delay in the update as I blessed with a baby girl and was in the hospital for twelve days due to Caesarean operation. So, there is a small delay in work progress. As of now, we paid the advance amount of Rs 54,000/- for the store towards rental, and the interior work is in progress. And we paid the amount of Rs. 30,000/- for the carpenter and masonry work as per our requirements inside the store to keep commodities or articles in proper place.
I'll update the details as the work progresses.

Thank you all!
Load more
Donate

Donated to this campaign via Paytm? Click here if you can’t find your donation listed below.
SC
Sheetal donated $200

Donated to this campaign via Paytm? Click here if you can’t find your donation listed below.
SC
Sheetal donated $200

You are sending a message to
Minal
Go back 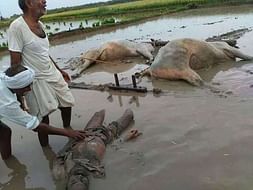