Support The Costume Man To Help The Needy Children | Milaap
This is a supporting campaign. Contributions made to this campaign will go towards the main campaign. 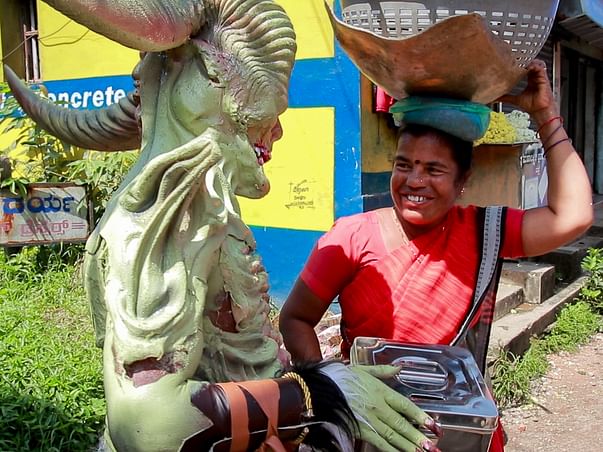 Every year, hundreds of tourists flock to the temple town of Udupi during Krishna Janmashtami. There are many vibrantly dressed troupes who take part in the celebration and collect small amounts of money for their art. Ravi Katapadi, , a resident of Katapadi, near Udupi, too was part of one such troupe.
Due to his background of poverty, Ravi could study only till 9th grade. He started working right after school as a mason. Today he earns around 450-500 rupees per day but work is sometimes hard to find. Ravi has lost both his parents and lives with his brother and sister-in-law. Although leading a life of poverty, Ravi always had a smile on his face while going through his tiring daily work. Everyone in Katapadi knew him due to his amicable nature.
Five year ago, he came across the news of a baby with a dysfunctional hand on TV which quite literally drove the man to tears. Baby Anvitha had lost functionality of her right hand at the time of her birth, due to negligence on the doctor’s part. Ravi initially felt helpless in providing any support to the baby’s parents but then he thought what if he pledges all the money he is able to collect for his costumed act that year and donate to the parents for the baby’s surgery. The little one’s parents gratefully agreed.
Conferring with his friend, who is an artist, on different costume ideas that would appeal to children, Ravi finally zeroed in on Faun, one of the characters that appeared in the film, Pan’s Labyrinth. 15 of his friends too agreed to join Ravi in his efforts and volunteered to support him in his efforts of collecting money for the baby’s surgery. Ravi to 12 hours to put on the costume which had taken a month to design. He then wore it for 36 hours at a stretch during the 2 day Krishna Janmashtami celebrations and collected money across Udupi with the help of his friends.  Hundreds of people from different backgrounds donated to Ravi's initiative, right from 5 rupees to 1000 rupees.
To his own surprise, Ravi was able to collect more than 1 lakh which was enough for the baby’s surgery. Greatly moved by Ravi’s gesture, the parents willingly accepted the amount and the baby’s hand was treated.
Today, it has been 5 years since the baby has been operated and the child can now comfortably use her hands. This had a huge impact on Ravi who decided to continue his efforts to provide help to as many sick children as possible through his costumes acts.Ravi has been donning amazing costumes for the last 5 years. Having put paint directly on his skin as part of the makeup, Ravi has suffered from severe burns over the years. And it takes close to 20 hours to get done with the entire process, after which he has to further undergo toil that prevents him from even eating or drinking for three days. This does not deter him from undertaking his mission.
He has helped 11 children get treated from 2014-2017. In 2018, this year, Ravi had donned the costume of monster and he was able to collect Rs. 5,32,000 for the treatment of 4 children which is an incredible feat. However, the money is not enough for the treatment of all 4 children.
Here are the details of the 4 children from poor backgrounds who Ravi wants to support in their treatment:
Your support can help Ravi, the costume-man, in his efforts to get these children get treated.

UPI: rzpy.givetomlpravikatp001@hdfcbank (Copy to clipboard)
Or
Click here to read the instructions before you make a bank transfer.

Here is some of the photos where we are helping the beneficiaries with the funds collected, and also, an article about the Costume man was covered by Deccan Herald.

Thank you for your support! Ravi donned this year's costume yesterday for Janmashtami. He hopes to help more children this year with the funds collected. This year, he hopes to help:

Please continue to support his cause by sharing the campaign among your network!

Watch the video to know more:

Thank You for all the support. Here's an update shot by Milaap team in conversation with Mr. Ravi Katpadi.

you are doing an astonishing job my friend may god bless you highest standard in paradise. Ameen

Thank you for spreading kindness in the world.

you are doing an astonishing job my friend may god bless you highest standard in paradise. Ameen

Thank you for spreading kindness in the world.

You are sending a message to
Anand Abhishek
Go back 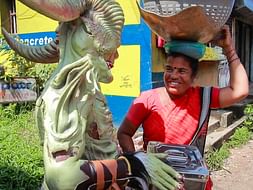