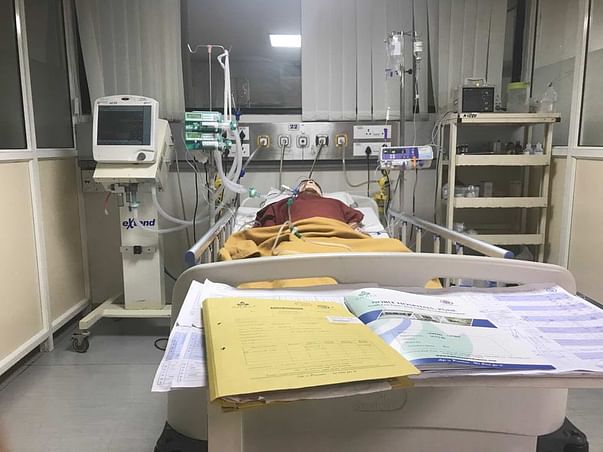 2/4/2018
Our father Mr. Laxman Gomase suffered a massive heart attach on 2nd April and was rushed to ICU in Noble Hospital, Hadapsar Pune. Upon diagnosis, he was found to have 3 blockages, one of which was 100% blocked and needed immediate action. The blockage was removed by angioplasty on the same day.

3/4/2018
Morning, doctors noticed that his one side of body was not responding to pinching and they suspected bleeding in brain. Upon CT scan, we were struck by a very unfortunate news. The bleeding in the brain issue to a very rare condition after angioplasty where the medicine given to patient to thin blood (after angioplasty) results in bleeding.

The chances of this happening, as informed to us are 1 in 50000. Decreasing blood thinning medicine to save his brain meant increased chances of the stint blocking and resulting heart attack. Keeping the blood thinning medicines dosage meant more bleeding in brain and more brain damage.
Immediate action needed to be taken and he went through brain surgery to remove the blood. In the evening, of the same day, post brain surgery, he was not found to have additional bleeding and was put on ventilator.

4/4/2018
Morning, we got the hard news. He had went into coma with one side of his body paralysed. His one side of brain 3/4th damage. Second CT scan shows fresh blood clot in other side of brain mostly affecting the area of brain that is responsible for speech, awareness, vision, etc. The 2nd clot could be removed with another surgery but the doctors said he's not in a condition to undergo second surgery and even after treatment the blood bleeding may come back again and the cycle may go on. We decided to not undergo surgery and keep him on medicine. But he has to be kept in ICU for 6-8 weeks, the cost for which is impossible to bear for us.

We are planning to shift him to another hospital to manage expenses, but still it will be a long run.
Our current spend  from our side for medicines and surgery alone is 4,95,983 + 35000/day ICU charges and any additional charges we don't know yet. We are trying to get quote from hospital on total expected amount.

I appeal to family and friends to help us  in our crisis.