Need donation for a CORONARY ARTERY BYPASS GRAFTING SURGERY + MV REPAIR. I should get back my uncle  from his medical conditions.
Doctors gave a date (maximum two months) and a quote (Rs. 2,67,750/-).They told to admit after paying the fee.
Surgery date fixed : November 4, 2015. Going to admit on November 3.
Story of Lordhu Samy:
My uncle, Lourdhu Samy is the one who took care of 3 families, and supported all his relatives.He being the first son-in-law of the family with four girl children. He takes responsibility of the family.My uncle and aunt are the only ones who care more about us, whenever we faced problems (Even for food), their home is the only go-to place that i know.
He has three children, 1 son (elder) and 2 daughters. He started his life as a helper in a provision store, After his marriage he started his own provision store in Sivakasi. After 15 years, he lost the store in heavy competition and started to work as security in fireworks. His son is an accountant in a local company. Uncle along with son, worked hard to manage the expenses of his daughters and his son.
He came to know about his heart problems in the year 2011. But he didnt care much about that, since he has his duties to do (marriages of his children). Although he was taking tablets from ESI hospitals for the past few years, Now his condition is critical.
Doctors are saying that this is a very critical heart problem. Saying something like out of three two valves are completely blocked, and third one is partially blocked. I am not sure whether what i am saying is accurate, you can find the medical details in the attached file.
I want him back. I wish he will take rest after recovered. But i know that my uncle is not of that kind. He will surely want to run for his family again.
What do I plan to do with the funds?
I will pay the Medical Bills from The Madras Medical Mission, Chennai

FAQs
Can't you afford the bill yourself?
The families are in deep debt, related to the loans borrowed during marriages. But somehow, we are able to collect from our immediate friends and some lenders Rs.1,00,000 (One Lakh).  We are requesting the remaining amount. Please find the estimation letter from the hospital below 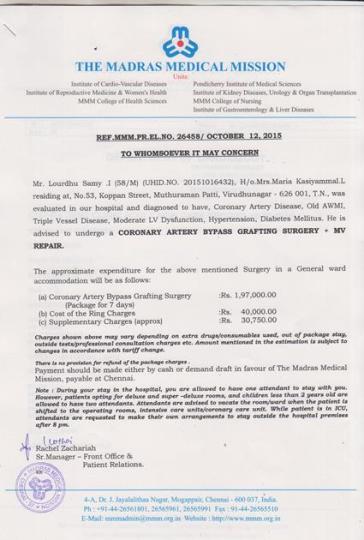