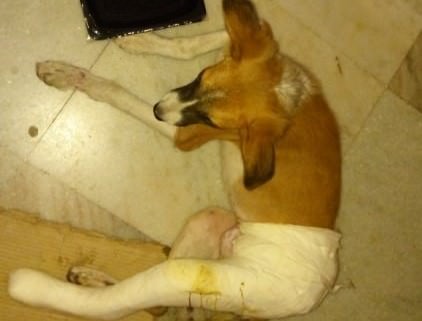 The night was pretty hard for Pepsi (that is what I have started calling him) , for every slight movement was painful for him , he was swimming in his own pee and shit and I cleaned what little I could without causing him more pain. In the morning, the car owner called and informed me that her men would come and take Pepsi to Friendicoes so that the treatment could be done and they would also keep him. I had my apprehensions since  I had heard that in such shelters they generally do not get proper care and most stray dogs are put to sleep since their health deteriorate  and it becomes impossible to keep them. So me and my friend accompanied the driver with Pespi and reached Friendicoes. Upon enquiry about the fact of what we had heard some workers there and the doctor confirmed that Pepsi would require special care because he had fractured his hip bone, had anal rapture and had spine injury as well. He would only survive if proper care was taken of him. In the shelter, there would more chances of him being put to sleep.
The Driver of The Car Disappeared, While We Were Getting The Puppy Treated

While I and my friend were getting Pepsi treated, the driver who had accompanied us disappeared. He had paid the Rs100 /- that is required to be paid when you get the dogs there. I had taken his number but on trying it seems he had given me an incorrect number. I spoke to the owner of the car and informed her that the driver is missing and asked her to send me his number. When she did, his mobile was switched off. Initially, the car owner had told me that she will help with the medication of the dog no matter what the cost was since she too is a dog lover and has three dogs of her own. And she cannot take the dog in herself. The Vet that had treated Pepsi the day before had said approximately the cost for the plaster would be Rs5000/. But after the driver disappeared leaving us in Friendicoes at 11 am she refused any further help saying that on humanitarian grounds she has done what she could do. The Vets fees of Rs500 and Rs100 in Friendicoes was paid by her driver.
I Decided To Adopt Pepsi
I was left with a clear choice that the doctor and few staffs gave me in Friendicoes- Take Pepsi in myself and take care of him, leave him on the street and forget all about him and the incident or leave him at the shelter where they would anyways put him down in few days because the situation that he was in, the doctor said very clearly, that he will not survive and will be put to sleep. I have respect for what they are doing there and understand they have their own limitations to how much good they can do or how much help they can provide. But I could not leave Pepsi now since he had become a part of my life in whatever way. So I took a call to take him in myself and to continue the treatment.
In addition to whatever was already  spent we had to pay Rs.400 for the x-ray and Rs.450 for the plaster, Rs. 150 for the rod for the plaster and Rs. 75 for the one-way transportation.
Now the only reason I sit and write this is on talking to the Doctor we came to realize that approximately another Rs.25000 Rs.30000 would be required for Pepsi’s treatment if I want to see him survive and hopefully walk again after three months of treatment. The Plaster needs to be changed every 10 days till a month , two injection every alternate day for a month which will cost Rs.300 to Rs 400 for each time, three other medicines that need to be given for three months and will cost approximately Rs.1500/- per month. Rs.100 charges for Friendicoes each time he is taken for the injection and plaster which is like minimum 20 days in a month and the transportation cost.
What breaks my heart is that this little stray puppy  understands my little pain as compared to him. Each time he wants to pee or shit , he starts making noise to signal me  that I have to  take him to the bathroom or sometimes he wants to shit in the balcony. He cannot pee on his own so I have to help him by pressing his penis to help him release his pee.
How You Can Help
I write this to ask you all to help me help Pepsi. Many of you will read this and probably help and many of you will be shocked and think who pays Rs.30,000/- to treat a dog, that too a stray one. I only ask you to consider that each time we step outside our houses a minimum of Rs.500 is spent and it does not even hurt us. If you all can choose not to spend that amount on coco cola or butter chicken or a movie for one day or one weekend and help Pepsi you might be able to make a difference to his life. We cannot make a difference to every stray dog that suffers but even if we can make a difference to a single one it counts a lot.
I am hoping that I find many like-minded friends willing to help Pepsi walk again. A heartfelt thank you to all who have taken out time to read and help. I want you to know you have made a difference!!