Help Mehtab Jahan Undergo Treatment For Breast Cancer | Milaap
Milaap will not charge any fee on your donation to this campaign. 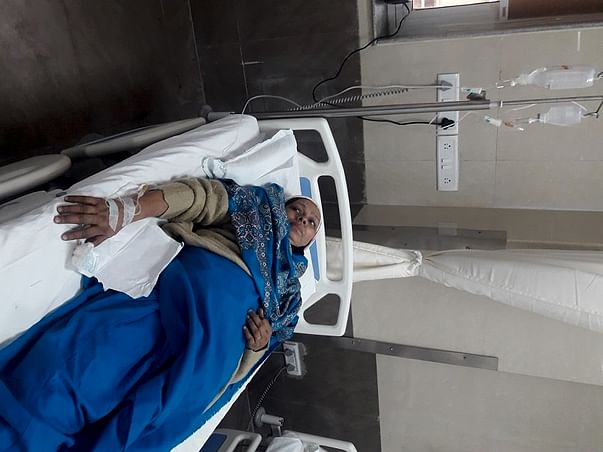 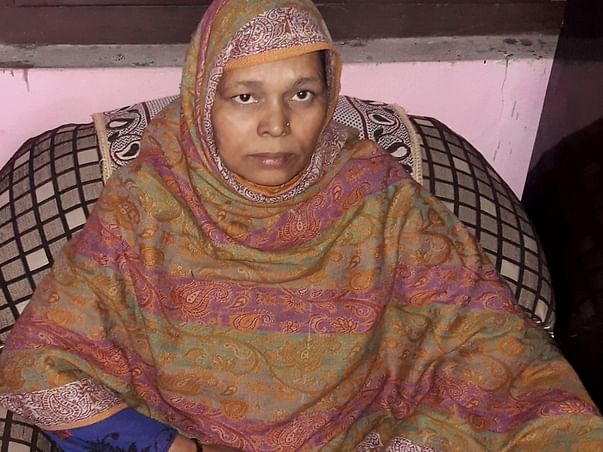 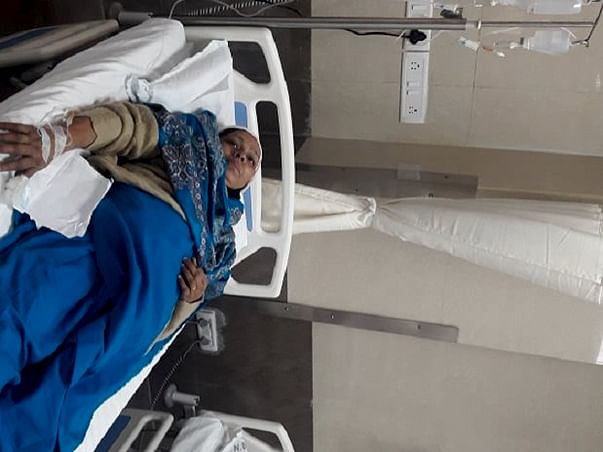 Previous Next
Life is strange. It is full of surprises-unexpected, pleasant, charming, joyful. Sometimes it also comes up with shocks, many of which are devastating and life-threatening.
Mehtab Jahan faced one such shock which has turned her world upside down.

Mehtab Jahan, aged 49 is an embroidery artisan (Zari Kaarigar) hailing from Bareilly (U.P.) She was widowed when her husband passed away 12 years back.
The family belonged to a lower middle class and with her husband's death, Mehtab and her little daughter came face to face with possibilities of starvation.
With no other source of income, she began working as a daily wage embroidery worker.

Life was tough and she was barely able to make ends meet with her measly monthly income of Rs. 3000
But she was still content, trying to find solace in little joys of life and with the dream of providing her daughter the best she could.

Until few months back, when she suddenly felt unwell. When her pain and her fever refused to go away after more than 2 weeks, she went to a hospital where she was diagnosed with cancer in
her left breast. The news completely broke her. Still hoping against hope and praying this be a false positive, she went for multiple tests diagnosis but confirmation from different doctors
at Bareill
y, Delhi and Lucknow have forced her to face the harsh reality.

As per the doctors, she has a very good chance of survival and subsequent recovery if she is able to undergo a timely treatment using a combination of Chemotherapy, Radiotherapy and around of surgeries to remove the affected area around the left breast.

She has already undergone multiple rounds of Chemotherapy (at SGPGI, Lucknow) and is scheduled for further treatment in coming months.
And in all these Chemo sessions, medicines, multiple blood tests, travelling to Lucknow have dried up all her resources which she was saving for her daughter who is coming of a marriageable age.

Her illness has also affected her ability to work and in turn her earnings are also dwindling.
The doctors at SGPGI Lucknow have estimated that the cost of surgery, radiotherapy and chemotherapy session would be approx. 1.5 lakhs.
Add to this, the post-treatment costs of medicines, regular checkup and tests, and the amount is bound to increase.

But with her limited earnings and virtually no savings, she faces an uphill task of arranging for the medical costs of further treatment.

Giving life is in hands of God, but He chooses people like you as His agents for this. You could help save her life by contributing whatever you can and praying for her.

With your help, she could be able to survive and fulfill her dream of doing as much as possible for her daughter.


I have attached the estimation letter from SGPGI Lucknow, and a few of her bills. Also attached is the income certificate (3000 per month).

In case you want to know more details, you can contact her nephew Kamran who has been accompanying her to various doctors and hospitals. 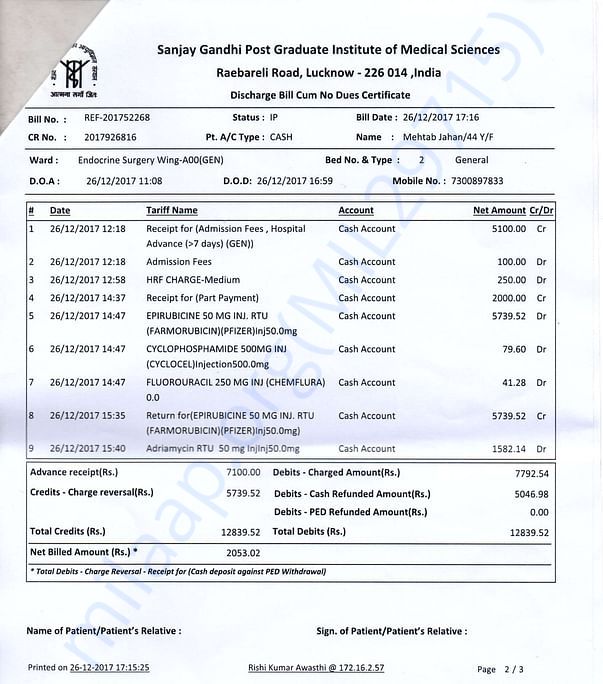 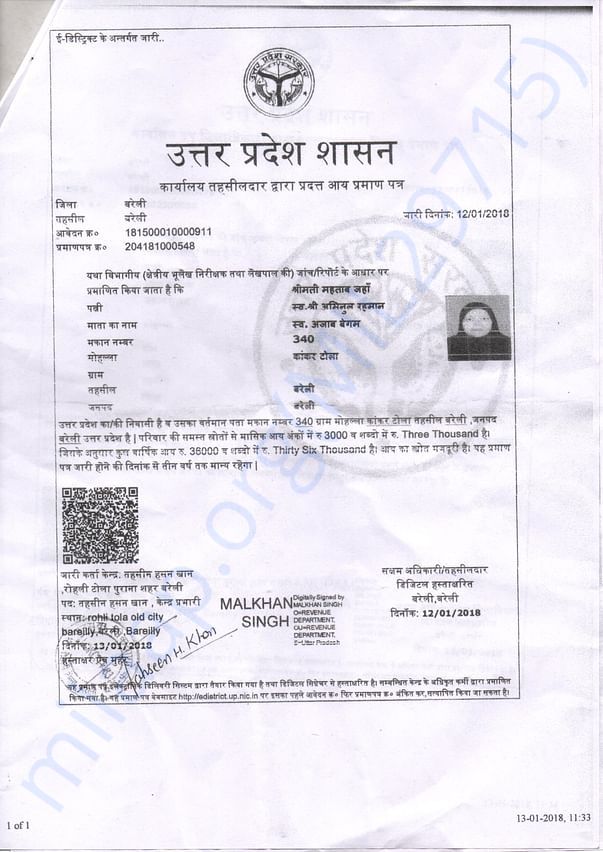 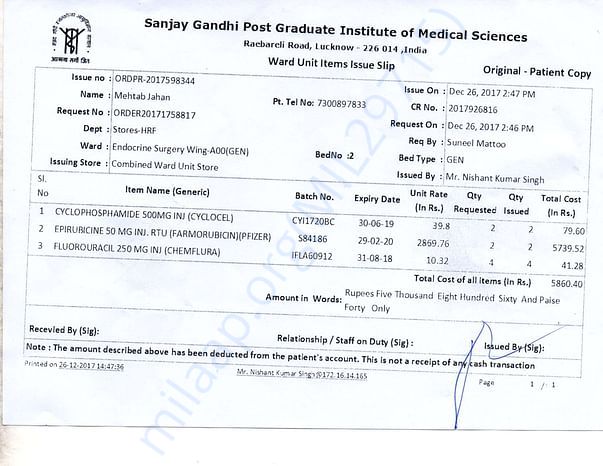 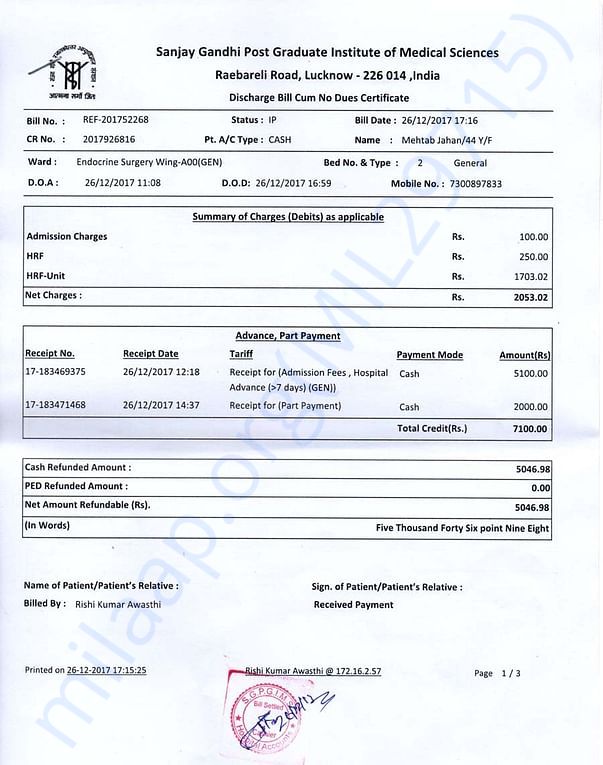 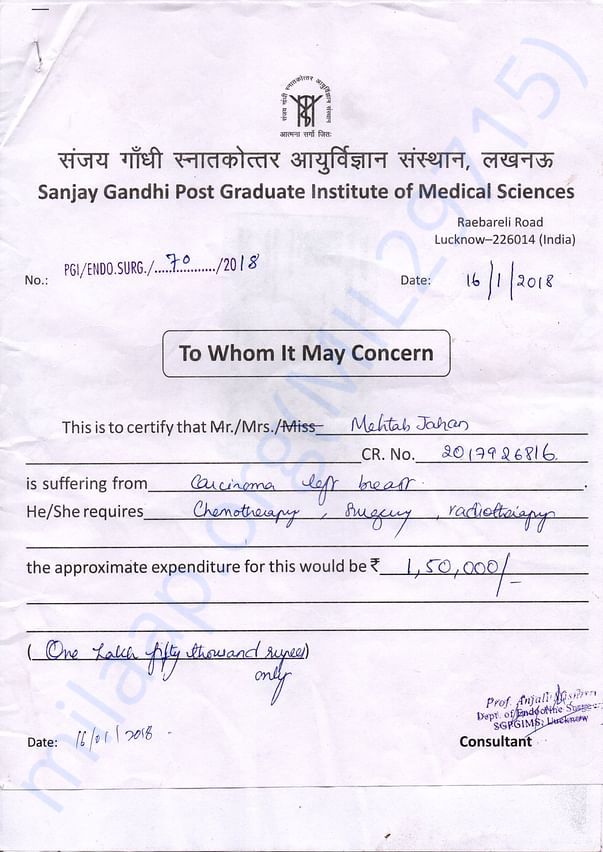 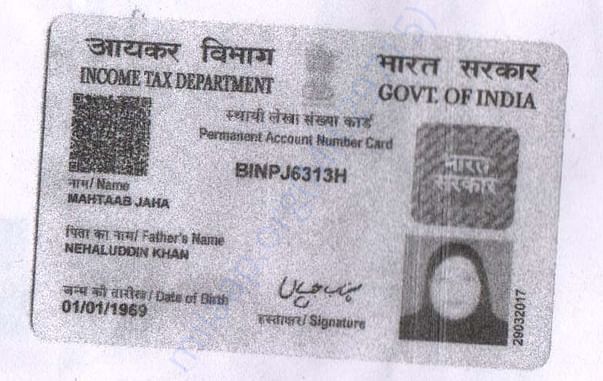 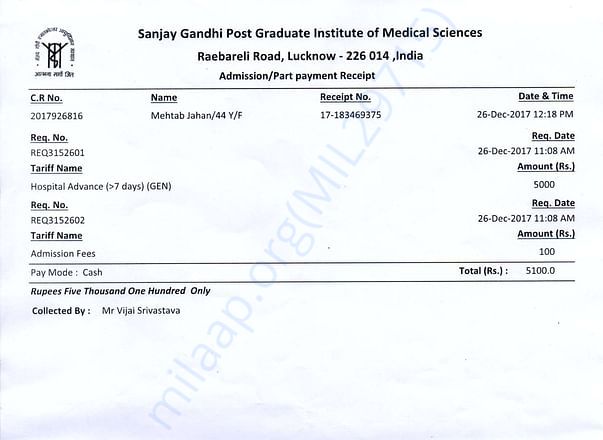 Ask for an update
Mahtab has been operated upon and now she is undergoing further treatment. Her condition is improving as a result of the treatment. Thanks to all the supports and well-wishers. Kindly keep her in your prayers as she still has a long way to go.
Donate
OR

Scan & donate with any app
check_circle_outline Download payment receipt
Report fundraiser
Know someone in need of funds for a medical emergency? Refer to us
Rs.4,665 raised

Donated to this campaign via Bank transfer/QR Code? Click here if you can’t find your donation listed below.
A
Anonymous donated $74.06

Donated to this campaign via Bank transfer/QR Code? Click here if you can’t find your donation listed below.
A
Anonymous donated $74.06
Report fundraiser

KK
You are sending a message to
Kamran Khan
Go back 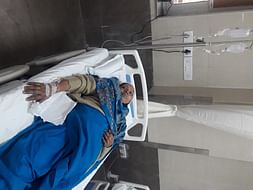