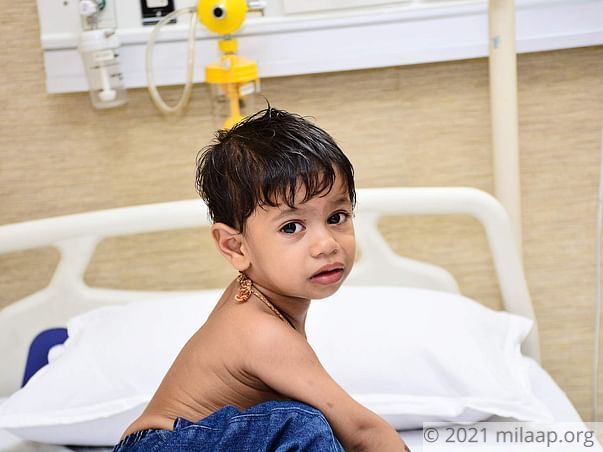 “My children are the lights of my life, but they are so sick. Not just one of my children, but both of them are suffering since birth. My wife, Bhanu and I couldn't speak to each other or to anybody else for months. All we do is rush to the hospital every other day with our 1-year-old, Lakshay. My baby's failing heart might also cause brain hemorrhage. He cries so much and struggles to breathe every minute. We have seen our children suffer so much that we have become numb. I shudder at the thought that maybe all of these sufferings will end only with our baby’s demise,” Trilok, Lakshay’s father.

For long Trilok believed that only his elder child was sick, but soon Lakshya was diagnosed with a fatal heart disease

Trilok and Bhanu have been married for almost 9 years now. They have spent most of their married years in the hospital. Their 5-year-old daughter, Divyanshi has been suffering from a stomach-related disease since her birth. She can’t eat well and has been on medicines. After little Lakshay was born, he had pneumonia thrice. He was so critical that his survival seemed to be a miracle. But only after few months, Lakshya began fighting death every day.

“He was suffering from fevers and cough and cold regularly. After carrying  a number of tests, it was found that he has a very weak heart and most of his body parts don’t get blood. I was scared because I knew my financial condition won’t permit me to afford his treatment. I was angry because I was poor and their treatment is beyond my reach.”

Little Lakshay has a narrowed aorta which doesn’t allow proper blood circulation to his lower body. He has this heart condition since his birth. The condition also causes high blood pressure in his upper body. Lakshay is at a high risk of brain hemorrhage. If the baby doesn’t get a corrective surgery as soon as possible, his heart and entire body will stop functioning.

“My baby is so irritated all the time. He cries so much that neither Bhanu nor I can do any work. He barely eats and is not even growing. We stay awake with him all night. His growth is brutally hampered. We try to lessen his pain as much as possible, but nothing seems to put him at ease.”

With sick old parents and an alcoholic brother, even 2 jobs aren’t enough to save Lakshay

Lakshay’s health has taken a huge toll on Trilok and Bhanu’s relationship. Once a happy couple, both of them are slowly slipping into depression.  Bhanu has become a very disturbed person. Trilok feels extremely sad that his once-chirpy wife has forgotten to smile.

“For all this while, I have spent everything I earn to get my baby treated. I used to work as a laborer in the morning and as a worker in a small shop in the evening. I managed to earn Rs 4000 a month. But all of this is too overwhelming for us. I have sick and old parents, and an alcoholic brother. I am the only breadwinner. With already existing responsibilities, it's very tough for me to save my baby. My baby is becoming sicker with every passing day, but I cannot arrange the money needed on time.”

1-year-old Lakshay is suffering from a severe heart defect that can even cause brain hemorrhage and kill him any moment. He needs a corrective surgery as soon as possible. Even after taking 2 jobs his father can’t afford to save him.