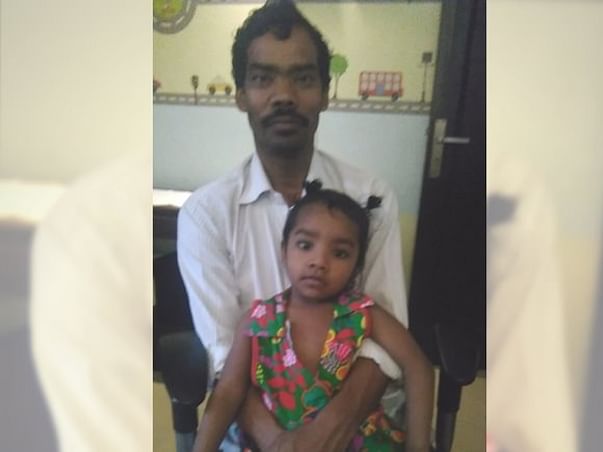 “Khushboo had been falling ill very frequently. When the doctors told me of the possibility of a heart problem, I refused to believe it. She’s normally such an active kid, always upto some mischief or the other. She runs around all day, plays with her sisters and is the heart of my little household. If she had a heart problem, could she be this active?”
Khushboo is an active toddler who loves to play and go for walks with her father. Her father Shamlal works as a helper boy at a private office where he earns 6-7000 a month. She has 2 elder sisters, who are still in school. Sham’s wife Rekha is also presently unwell, and cannot get off the bed due to excruciating pain in her stomach. Shamlal's income is hardly enough to meet their regular household expenses.
Under these circumstances, all 3 daughters are very close to their father.
“I’m happy and proud to have 3 daughters. They will all grow up to make me proud. I want to educate them and make them independent.”

“When this little one falls ill, my entire house sinks to cold silence. Nobody feels like talking or smiling. She is so bright and cheerful otherwise. It hurts us all to see her in pain.”
Unlike a normal case of pneumonia, Khushboo’s was recurring: multiple times. That was the first time Shaam suspected something wrong. When he took her to the hospital, they suggested the possibility of a serious heart problem, but that was beyond Shaam’s imagination. He could not believe his otherwise hyper-active, playful little girl could have a real threat to her life. He took her to another hospital.

But the threat turned out to be real.

The second hospital confirmed the diagnosis. Little Khushboo really had a hole in her heart. One of the ducts between two blood vessels had failed to close post birth. She needs an urgent transplant. The duct must be closed using a device.

As she grows, the threat to her life keeps increasing.

“That was it. For the next few days I neither ate, nor spoke to anyone. My world was about to shatter. My little daughter was not even 3. I could not watch her die like that! But then again, a lakh was not an amount I had seen together. What were my options anyway?”

2-year-old Khushboo has hardly started her life. The bubbly, toddler has so much to look forward to. Constant illness and medication is making her silent, withdrawn and weak. Her father is helpless as he watches his little one give up on life. He is praying for support to save the baby’s life.

Your help could be the miracle that could save his daughter’s life.