Helpless Uber Driver Is Struggling To Save His Baby From Blood Cancer | Milaap
This is a supporting campaign. Contributions made to this campaign will go towards the main campaign.
This campaign has stopped and can no longer accept donations. 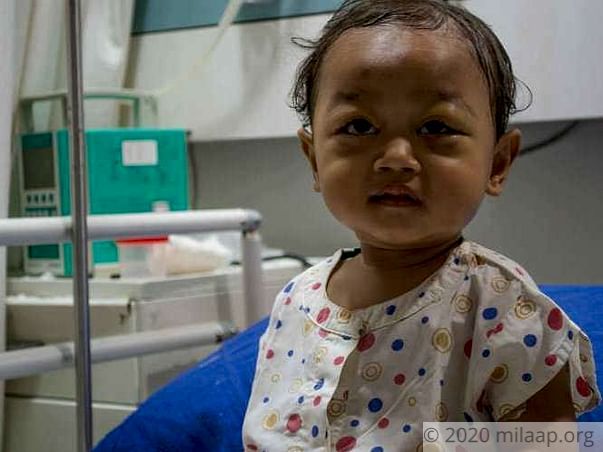 Just a month ago, 16-month-old Aaditri seemed completely normal. Now, she has traveled all the way from Assam to Mumbai and is very critical, suffering in pain due to blood cancer. To survive, she needs treatments for the next 3 years and her father, who is an Uber driver back in Assam, has absolutely no idea how to save his daughter.


Kavita, Aaditri and Nayan, in the hospital

Less than 2 weeks ago, in February, Aaditri’s bags under her eyes started swelling up and she started developing black spots on her head and throughout her back. After performing blood tests back home in Guwahati, Nayan, Aaditri’s father, was crushed when he found out that his 16-month-old daughter had Acute Lymphoblastic Leukemia (A.L.L.).

A.L.L. is a type of blood cancer that spreads rapidly and if untreated, it can prove to be fatal very quickly. To get her the best treatment possible, Nayan decided to get her to Mumbai.


“Aaditri loves to listen to songs and dance. Now, she’s so weak, she doesn’t feel like walking too. She gets frustrated easily and cries a lot. She is so weak but I just want to her to get better, I will do anything and everything for her.” - Nayan

After coming to Mumbai on 28th February, Aaditri’s condition had worsened and she is now, very critical. Nayan and his wife, Kavita, received yet another blow when they found out that to survive, their baby would not only need intensive chemotherapy for the next 6 months but also other treatments for the next 2 and a half years.

Aaditri needs to undergo a high dose of chemotherapy immediately. All this is way above Nayan’s reach and he has no idea how he’s going to provide for his 16-month-old daughter’s survival.

“As her father, I can’t describe what I’m going through. I had so many dreams of the things I wanted to make her do, but it feels like all of them have been snatched away. It really is heart-breaking and I feel that it’s no unfair to her but I have to remain strong for my wife and Aaditri.” – Nayan, while weeping.

This is perhaps the first time Nayan and his family have stepped out of the state of Assam. Not only are they extremely vulnerable because of Aaditri’s condition but to complete her treatment they would need to stay in Mumbai for a minimum of 6 months.

“I never thought that I’d ever come to Mumbai. Now, Aaditri needs to undergo treatment here for 6 months and we have no idea where we’re going to stay. Some people told me that it costs around Rs. 20,000 per month for a room but that is so expensive. Other than providing for her treatment and medicines, I also need to worry about rent and food. Mumbai is just so expensive and we don’t even know anybody here. I don’t have the required money for the treatment alone.” – Nayan, sounding confused

In addition to this, Aaditri also needs more than 2 years of additional treatment based on how well she is doing after 6 months. Providing for 2 years is a hefty load that Nayan simply cannot afford even if he worked for a decade.

Nayan and Kavita are in dire need of help

In Guwahati, Nayan works as an Uber driver where he earns around Rs. 5,000 per month. While he’s still worried about the large sum of money, he doesn’t really have anyone he can ask. His relatives are helping him but combined, they’re still nowhere close to the amount Nayan needs to give his baby the life-saving treatments.


The total cost of 6 months of intensive chemotherapy and 2 and a half years of treatments is estimated to be around Rs. 15 lakhs, which is way beyond what Nayan and his family can afford.

“We had a small piece of land, which I sold before coming to Mumbai. That’s just a small fraction of the cost. Now, God only knows what will happen because I need to stay here (Mumbai) for the next 6 months minimum and provide for her treatment and worry about putting a roof over our heads.” – Nayan

Nayan has very little saved and now, he has nothing left. He needs your support to help save his daughter.

16-month-old Aaditri’s life has turned upside down in a matter of weeks. She is very critical and suffering from a severe form of blood cancer. She needs chemotherapy and additional treatments to say alive but her father has nothing left to save her. He needs your support to help his daughter live.

Your contribution will save 16-month-old Aaditri.
Estimation Letter 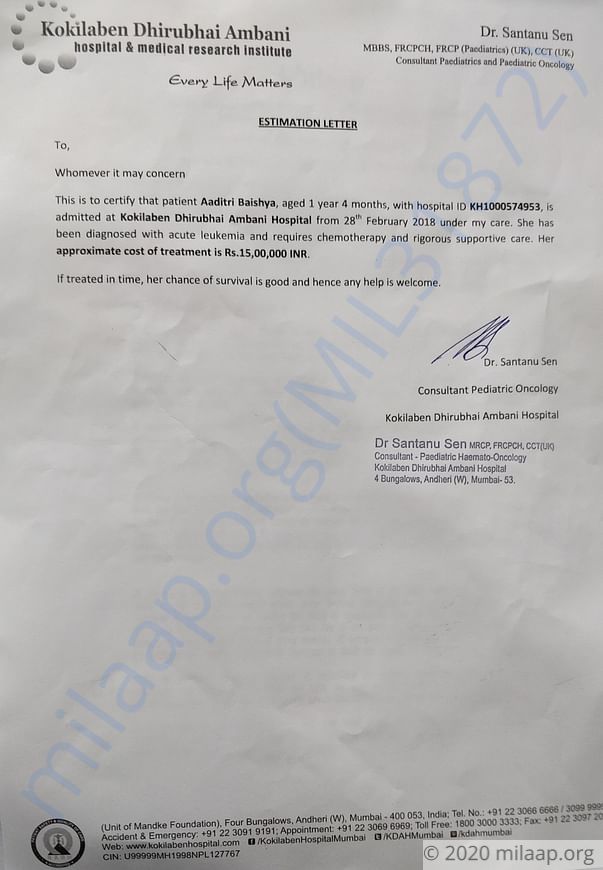 Aaditiri's treatment ended 4 months ago and she is back home with her family. She is still undergoing Chemotherapy on a monthly basis but is doing very well.

We are very grateful to you all!

Aaditiri is doing well now. She will be finishing her last cycle of intensive chemotherapy in another 4-6 weeks. Once she is done with the chemotherapy, she will go on maintenance. This is her 8th month of chemotherapy.

We are very grateful to you all!

Thank you for the love and support. She is doing very well and has a last run of intensive chemo of 1-2 months pending before she goes on maintenance chemo which she will be taking at her home town.


Thank you all for all the blessings, prayers and timely help!

Regards,
Dr. Kushnuma
Load more
Donate
Report fundraiser
See how thousands are crowdfunding for their causes on Milaap
Content Disclaimer: The information and opinions, expressed in this fundraiser page are those of the campaign organiser or users, and not Milaap.
If such claims are found to be not true, Milaap, in its sole discretion, has the right to stop the fundraiser, and refund donations to respective donors.

Rs
You are sending a message to
Rahul singhal
Go back 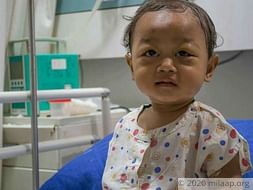