Help Aprajita Fight Aplastic Anemia | Milaap
Milaap will not charge any fee on your donation to this campaign. 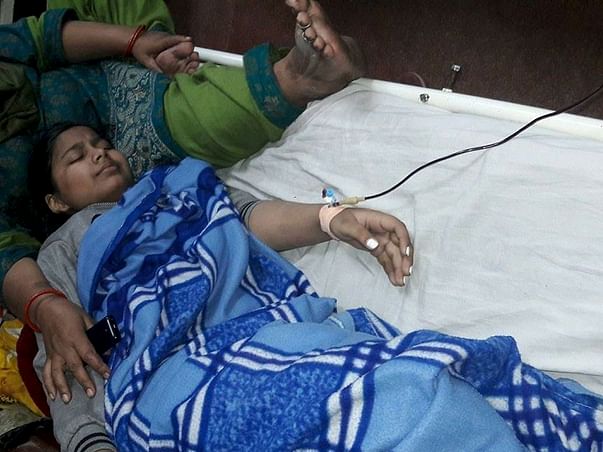 We all dread those prickly injections, don’t we? Then just think about the excruciating pain that one must have gone through during more than 50 units of blood transfusion and more than 100 units of platelets. And what if I tell you that this not the end, rather just the beginning? Well, sad as it may sound but this is the story of a 12 year old girl named Aprajita. Yes, just 12 year old. Now you must be thinking about the cause of all this. So, in the root of all this trouble lies a deadly disease called Aplastic Anemia.
This actually is a very rare kind of disease in which the Bone Marrow, which can be understood as the factory of the Blood Cells, is unable to produce enough of Blood Cells. But how can a body survive without blood, which happens to be the lifeline of the body? As if this was not worse, the body enters into a self-destruction mode. The Immune system which is supposed to defend our body starts killing its own blood cells and platelets. This indeed worsens the condition and the blood needs to be transfused Immediately.
In case of Aprajita, it all started in June, last year, when she started feeling dizzy, fatigue and headache. But looking at these small symptoms, nobody had imagined the trouble of being this much gigantic. So the parents took it lightly, as anyone would have done in that scenario. But the condition kept on deteriorating till it became too serious. Then the parents rushed to the Patna Medical College and Hospital (PMCH). There the doctors diagnosed it as a case of Aplastic Anemia and referred it to AIIMS, New Delhi (under Dr. Tulika Seth), which is one of the very few hospitals in the country offering the treatment of this rare disease related to Hematology. The doctors prescribed  for HLA Typing where the Bone Marrow of the patient is matched with the siblings or the parents in order to examine the scope for the Bone Marrow Transplant, which costs around Rs 35 lakhs in India. The typing of brother had to be done in a private laboratory, costing around Rs 12000, as the waitlist in AIIMS was 6 months long. The report came from New York and unfortunately the match with the only brother was not found. Now the match with the parents is still waitlisted in AIIMS as it will again cost a lot if done outside. Meanwhile the doctors have prescribed for an injection which alone costs around Rs 6.5 lakh.
And this is the cost of just the injection, leave aside the other costs which can shoot up to more than Rs 10 lakh.  This becomes way out of reach for a Lower Middle Class family like the one of Aprajita.
The parents tried the doors of many politicians and bureaucrats, but all was futile as no one took it seriously and didn’t offer even a single penny. Then somebody told about this generous organization called ‘Milaap’, which offers such a magnificent platform for organizing this Fund Raiser Campaign.
Now that we are done with our part, there is still a little ray of hope, in the form of generosity of you kind people. It will be a great deed done in the favour of humanity if you contribute and help this little girl get back to life which we all wish to be a long and healthy one. After all “Worship of the Children of God is the Best form of Worship.”

This is a Prescription Copy of the ongoing treatment in AIIMS 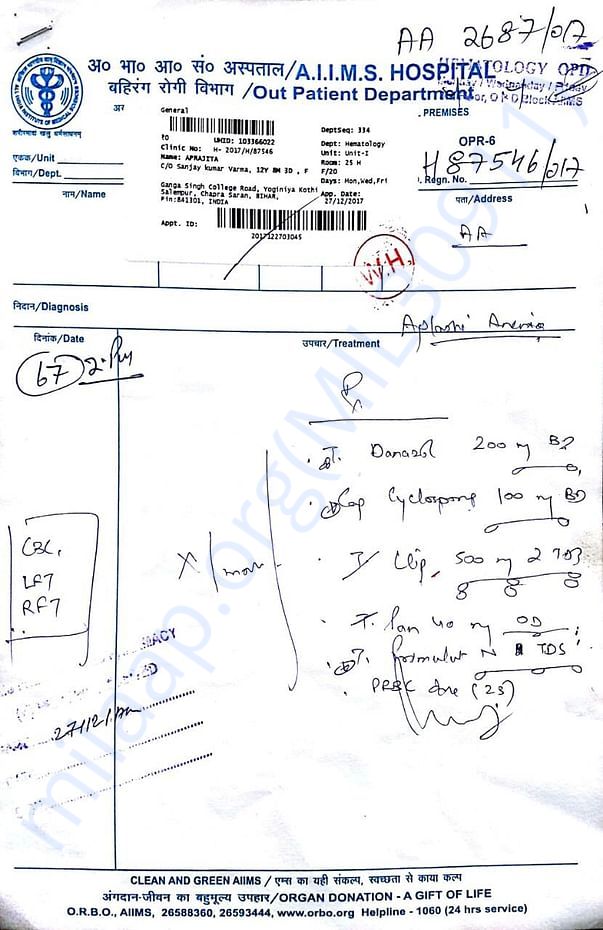 Pic of painful process of Blood Transfusion. 50+ units given so far 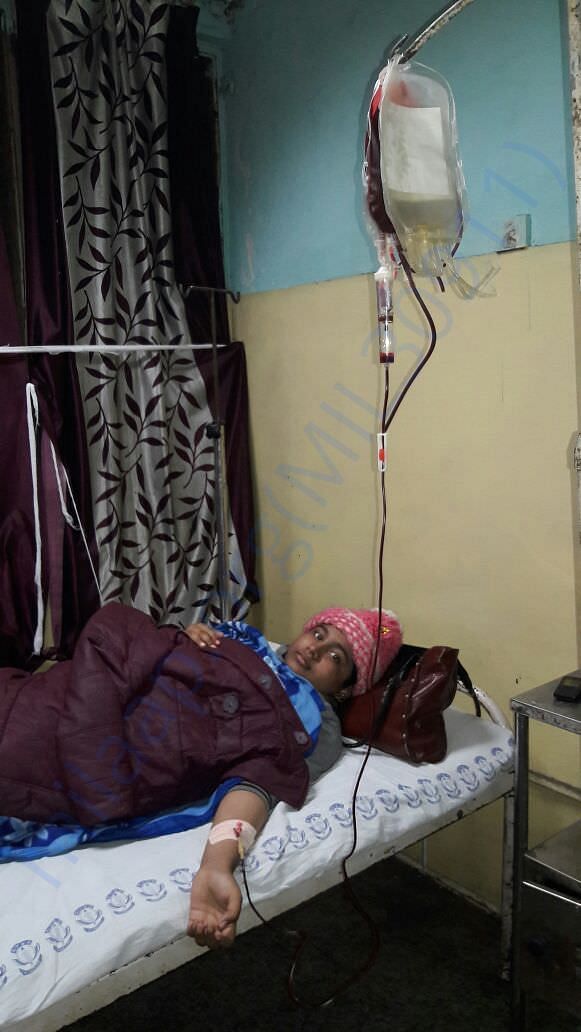 THANKS A LOT TO ALL OF YOU WHO DONATED GENEROUSLY TO THE CAMPAIGN.

IT WAS A HUMANITARIAN DEED OF PERHAPS THE GREATEST DEGREE. ALTHOUGH THE TARGET COULD NOT BE ACHIEVED, YET WHATEVER AMOUNT THAT HAS BEEN COLLECTED WILL PROVE TO BE BENEFICIAL TOWARDS THE TREATMENT OF APRAJITA.

THE DOCTOR HAS GIVEN THE DATE OF 16th MAY FOR THE ADMINISTRATION OF THE ATG INJECTION. BUT UNFORTUNATELY IN THE LAST 2 TRANSFUSIONS, THE BLOOD HAS REACTED DUE TO LACK OF CERTAIN COMPONENT CALLED 'PLC' IN THE BODY.

SO WE ARE TRYING OUR LEVEL BEST TO GET THE DATE PREPONED.
JUST HOPE THAT WITH THE BLESSINGS OF YOU ALL, SEE GETS WELL AS SOON AS POSSIBLE.

REQUEST YOU TO SHARE THIS CAMPAIGN TO HELP WITH APRAJITA'S TREATMENT.

The festival of colours, Holi, is over. Hope it filled the life of you all with vibrant colours. But I just want to remind you all about the darkest that is still persisting in the life of this little girl Aprajita. This campaign was started with a mission to help her fight for life, and you all were of great help in an trying to make it a success.

The process of blood transfusion is still going on. Most importantly, the date for the main treatment by administration of Immunosuppressant Injection and ATG has been given by the AIIMS to be 16th MAY. But the fund is still the main hurdle.

So, with the freshness, strength and zeal brought by this beautiful month of March, I would request you all to spread this humanitarian cause further so that the life of this little girl also gets filled with colours. For her, the true Holi will be on the day she gets rid of this painful disease.

Thanks again for the support and a humble request to share this campaign further to make this a success. Will keep you posted about her health.
Dear Supporters,

OUR CAMPAIGN IS GOING VERY WELL, AND WE HAVE RECEIVED AN IMMENSE SUPPORT FROM YOUR SIDE. HOPE YOU ALL CONTINUE YOUR SUPPORT FOR THIS GOOD CAUSE IN FUTURE ALSO.

RIGHT NOW WE ARE WITHDRAWING WHATEVER AMOUNT HAS BEEN COLLECTED SO THAT IS CAN BE DEPOSITED AS AN INSTALLMENT IN THE HOSPITAL FOR THE PROCUREMENT OF THE INJECTION THAT HAS BEEN PRESCRIBED.

BUT THIS IS NOT THE END. THIS AMOUNT IS NOTHING IN COMPARISON TO WHAT IS REQUIRED FOR THE ACTUAL TREATMENT. SO KEEP SHARING, CONTRIBUTING AND SUPPORTING.

THANK YOU SO MUCH FOR YOUR LOVE AND SUPPORT!!
Donate

Scan & donate with any app
check_circle_outline Download payment receipt
Report fundraiser
Know someone in need of funds for a medical emergency? Refer to us
Rs.28,104 raised

Donated to this campaign via Bank transfer/QR Code? Click here if you can’t find your donation listed below.
AA
Anupam donated Rs.500

Donated to this campaign via Bank transfer/QR Code? Click here if you can’t find your donation listed below.
AA
Anupam donated Rs.500

SS
You are sending a message to
Sameer Shanu
Go back 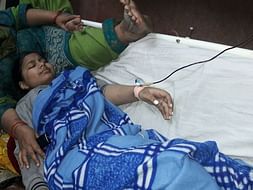