7-year-old Vyshnavi had a brain stroke that made her unable to speak | Milaap
This campaign has stopped and can no longer accept donations. 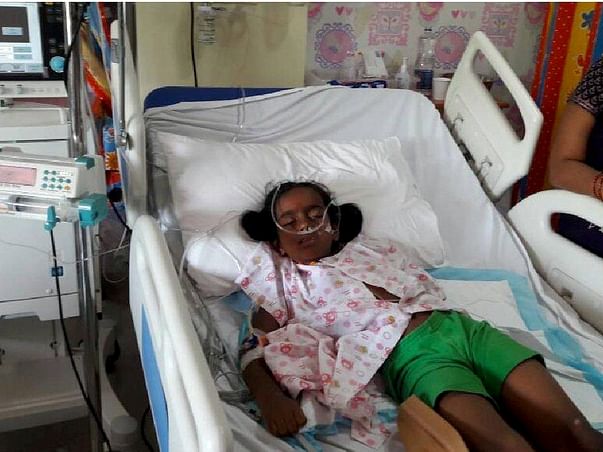 Vyshnavi is a 7-year-old from Bangalore who has suffered a brain stroke and paralysis. She is in Paediatric Intensive Care Unit. Her father, Ayappa is a mechanic and the sole earning member of the family. Ayappa makes Rs 350 for every day he works. He is finding it very hard to provide the necessary treatment to save Vyshnavi.

It started with severe vomiting that did not stop

The first episode of vomitting happened in January this year. Vyshnavi got dizzy and the dizziness made her vomit. Vyshnavi was taken to a local clinic for treatment and this is what made things worse, thinks Ayappa. “We should have taken her to a good hospital right then, but we didn'tknow that the situation would get so bad,” she says.
Ayappa and Vijaylakshmi with Vyshnavi
Vyshnavi kept taking some medicines that helped her for sometime but the vomitting returned. Her parents didn't know what was happening. Finally, two weeks back, her vomitting became severe and she lost consciousness. By now, her parents were very scared for Vyshnavi.
Ayappa then brought her to Cloud 9 in Jayanagar because she needed to be in a good paediatric intensive care unit. Vyshnavi was diagnosed as having suffered a brain stroke. “We don't know what Vyshnavi has and we don't know why it happened. All the doctors told us that we understood was that this was a disease that old people have,” explains Ayappa.

Vyshnavi is the light of her house

Vyshnavi is Ayappa and Vijaylakshmi's youngest child. Their son Santosh is three years older and is the quiet one. Vyshnavi is the one who lights up this couple's home with her laughter and antics. She has regained consciousness now, but she has not yet began speaking. To see their bright chatterbox suffer in silence – unable to utter words breaks Vijaylakshmi's heart.
Vyshnavi has regained consciousness but still cannot speak
“She is just seven, but she always knows what she wants. She wanted to become an IAS officer because they seemed to be able to correct injustices in the movies she saw. She talks about it to every one. Now I can see she wants to say something – but her brain is too weak to make words. The doctor said it'll take some time,” Vijaylakshmi says.
Ayappa works as a mechanic and Vijaylakshmi earns some money baby-sitting. Together, they earn Rs 15,000 per month. It takes care of their daily expenses, but they don't have enough to pay for Vyshnavi's medical treatment. With Vyshnavi being in the intensive care unit – every day their medical bills pile up.
The Hospital and its team of doctors have provided the best possible priority care for this baby. They have generously waived off as much as fee as possible and have applied for discounted service charges too. Please help the family cope with this difficult situation. "

Ayappa has borrowed funds and used up their small savings and paid Rs 1 lakh for the treatment so far. He needs another 2 lakhs so he can keep his daughter in the PICU where she can be given her treatment and monitored for any complications. Without treatment, she might suffer permanent brain damage or a more severe stroke.
Help this Ayappa save his daughter's life and contribute now. 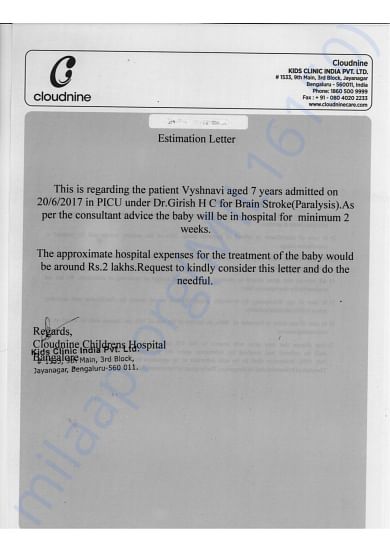 Scan & donate with any app
check_circle_outline Download payment receipt
Report fundraiser
Know someone in need of funds for a medical emergency? Refer to us
Rs.79,715 raised

52 Supporters expand_more
This campaign has stopped and can no longer accept donations.
$150 Million +
Raised on Milaap
Are you in need of financial support for medical or personal emergencies, or a social cause?
Start a fundraiser
Or
Know someone in need of funds for a medical emergency? Refer to us
Campaign organizer contact_mail
N
Nirmala
Beneficiary: Vyshnavi info_outline

N
You are sending a message to
Nirmala
Go back 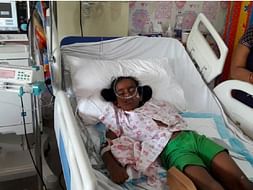