Help Vivek Get Back At Life! | Milaap
This is a supporting campaign. Contributions made to this campaign will go towards the main campaign.
This campaign has stopped and can no longer accept donations.
Milaap will not charge any fee on your donation to this campaign. 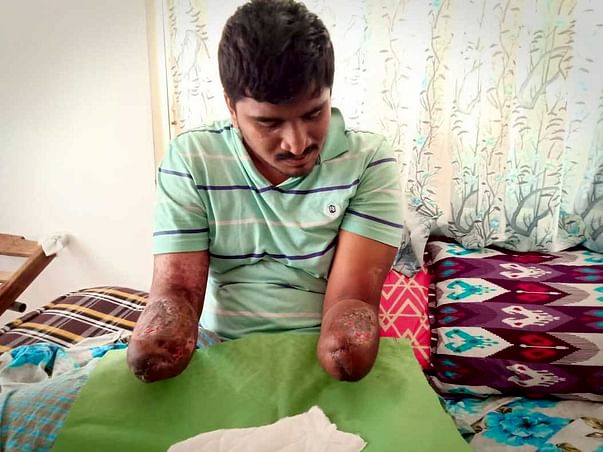 As he turned 23 in May, Vivekananda blew out his candle with a wide smile and went on a ride with his friends. He is an energetic and fun-to-be-with kind of person. He made a wish to keep his family happy that day. Little did he know then that starting this year, his life would be difficult.

Vivekananda was studious from his childhood. Seeing all the hardships his parents had gone through in getting his education, he always wanted to help his family. After graduating from Gayatri Vidya Parishad College of Engineering, he secured a job at Model N, India and proudly took the responsibility of supporting of his family. His parents had high hopes for their son's future.

On September 12th, he met with an electric shock accident (electrocuted) near his home. He fell unconscious and his friend and neighbours helped taking him to nearby Kondapur Govt. Hospital. Doctors identified it to be a major accident after checking his burnt hands.

“Please kill me. I’m not able to bear this pain”, he shouted so loud in pain with his eyes closed. Doctors gave him first aid and asked his friend to take him to the super specialty hospital as treatment cannot be done in normal hospitals. He was immediately admitted to Citi Neuro Center (Banjara hills Road Number 12) and later that night an immediate surgery was scheduled.

From that day onwards, the team has performed multiple surgeries every five days to remove the dead tissues. Doctors have done skin grafting partly, to about 60% of the burnt hand leaving the remaining part untouched. One evening, his parents were taken into the consulting room and slowly they revealed the case -  “The electric burns were so severe that it damaged the dual supply arteries in the right hand. There is no blood flow in the right hand and it must be amputated otherwise the remaining part of the body will get infectious. ”

But God didn’t bless him even that. One day, the only artery that is supplying the blood in the left hand burst and again he was taken into the emergency ward. The problem with electric shock is we never know what happens next. He lost 700 ml of blood that day and his blood level point fell to 6 . He just fought with death and won again. But during this battle, he had to lose his hope on the left hand too.

“We’re sorry, we will have to amputate the left hand”, the doctor said pressing Vivek’s left hand fingers with needle to indicate there is no blood flow after the nerve burst incident.
“Please save one hand atleast”, his mother begged and broke down to tears again.

But no God responded to her prayers and no doctor could help Vivek that day and he got his left hand amputated. Coding is his passion and  he will not be able to use laptop ever again with his hands. He will not be able to eat his own food, hold a glass or even button his own shirt. But this time he didn’t cry. He was determined and strong. He motivated his parents who broke down. He just prayed and wished everything would be fine.

Everything went blank for him and his family.  One day his friend showed him the technology that’s been developing in the world. There are prosthetics for the people who have no limbs. Using them will let one to be independent. So prosthetics became his only hope. But knowing its cost and his family's financial status, he is losing hope on even that. The functional prosthetics cost about 70 lakhs(each hand costs 35lakhs). His family knows  that if they can’t arrange the money, their son would not be able to lead a normal life. His father is a teacher and mother - a home-maker. Their income and savings are all used for his treatment and now they don’t know whom to turn to.
We just wish him to be energetic and happy again. Please help him!

Vivekananda smiles through the pain, making people around him often forget the monumental battle he’s fighting inside. His parents don’t have the means to help him. Vivekananda has fought bravely so far, but he can lead a normal life with your help. 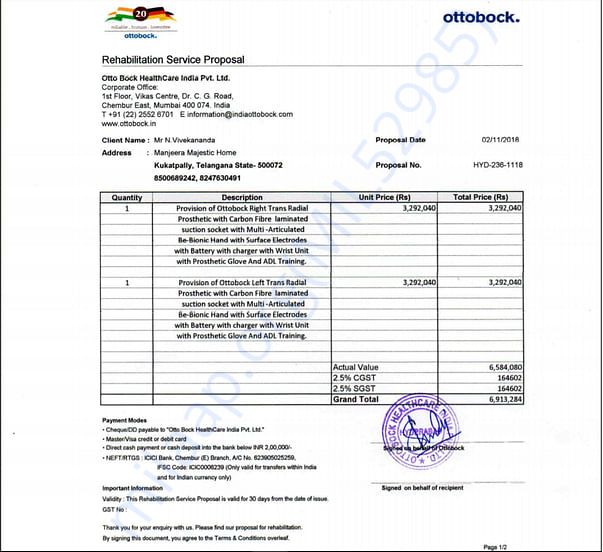 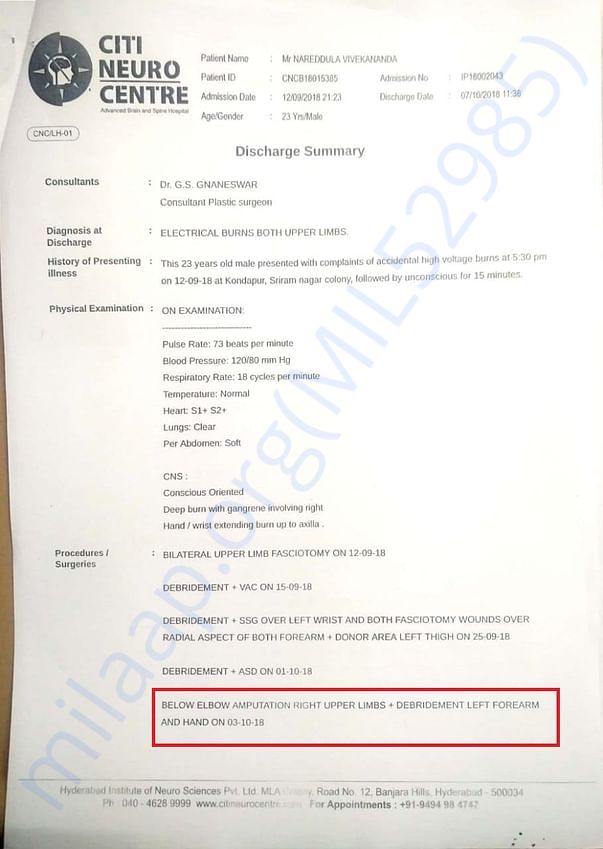 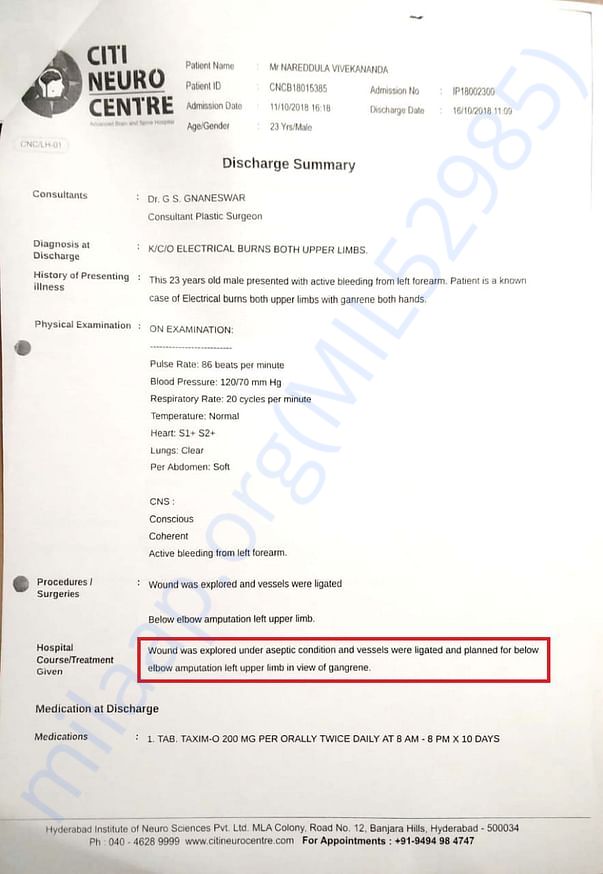 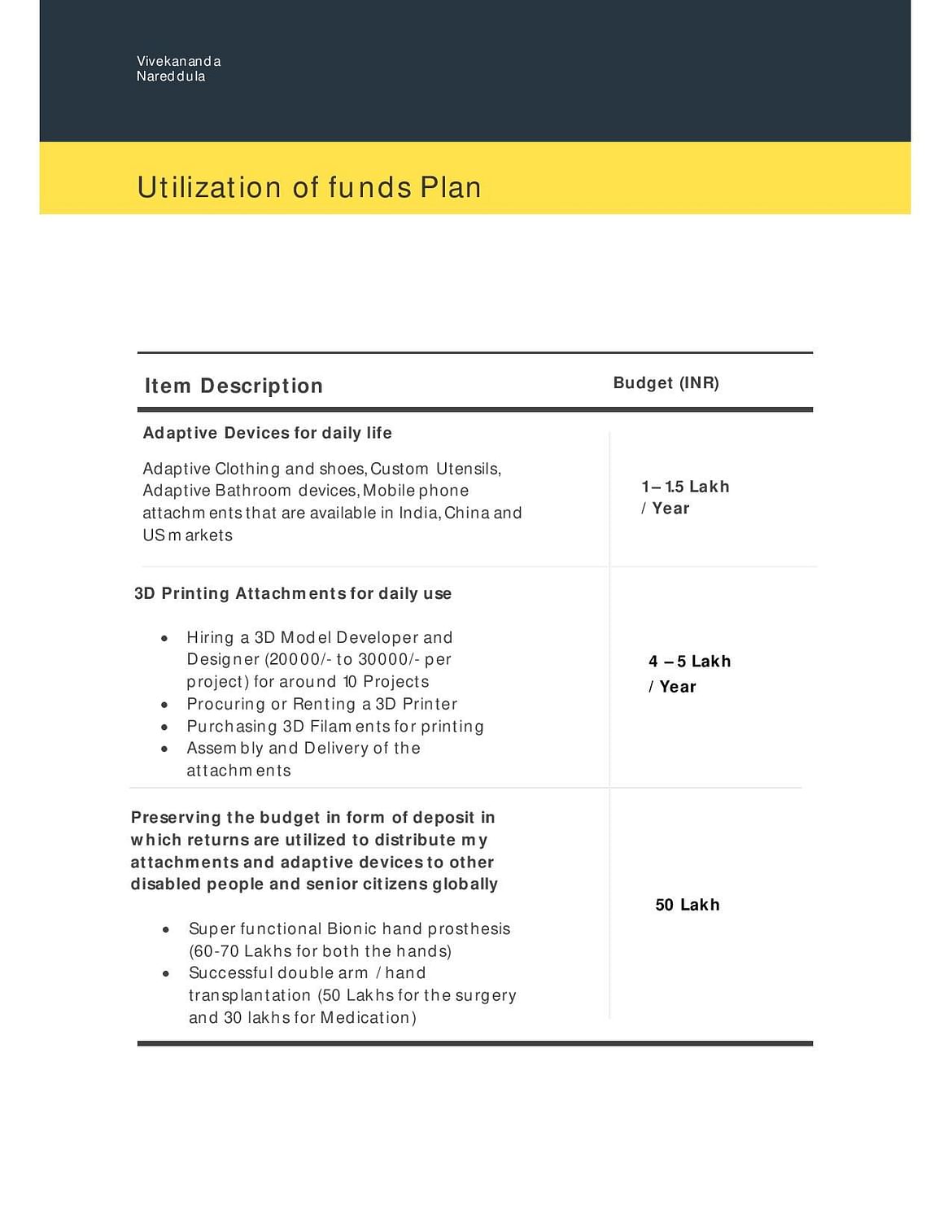 Thank you so much for all the love and support you’ve shown me so far. I’m writing with a few updates.

After my last surgery- having the amputation, I had primarily two options in my mind- to go for either prosthetics, or a hand transplantation. The area of prosthetics research is evolving constantly and improving. Currently, the cost of prosthetics is quite high and it is still not the same as having a functional limb. However it is my hope that a few years down the line, this will change.

I had also visited Kochi and spoken to a few doctors about hand transplantation surgery. However this will require me to be on immune-suppressants for the rest of my life, and doctors advised that this would also reduce my life span by a decade or so. There is ongoing research into transplantation surgeries as well.

I am hence waiting for some time to take a decision to go for either of these.

Here is a detailed outline of how I’m planning to utilize the funds raised in Milaap:

1. Adaptive Devices for Daily Use:  1-1.5L INR per year
I’m currently doing well and trying to be independent in my daily life. In this regard, I’m looking to create more adaptive devices that can be useful for me. Like adaptive clothing (https://www.magnaready.com/ ) that will make my everyday life more comfortable.

2. 3D printing attachments for daily use: 4-5L INR per year.
I’ve designed a few 3D printing devices already- such as a pen attachment that helps me write. I’m constantly working on a few designs like this- that will help lead a normal life. I also plan to hire a few designers to help with this. I estimate each project to cost around 20,000-30,000 INR.

3.  The bulk of the remaining funds- around 50L, I’m planning to put it in a deposit. The returns of this will also be used to finance my other projects. Once I decide whether to go for prosthetics or transplantation, these funds will be used towards either cause.

The funds from this campaign are being transferred in two parts. Within 30 days of the funds being transferred to my account, I will provide documentation for the investment proof as well as invoices for ongoing projects. I will keep you regularly updated on any further progress I make. Once again, thank you so much for all the love and care you have shown me.

Its been around one year since my accident had happened and I want to thank you all again from the bottom of my heart.

I would like to share how I am going to utilize these funds for my future living to get my independent life back.


With day by day technology growth, Prosthetics are getting more affordable with good functionalities. Similarly, doctors in the health sector are also working on better improvisation process of transplantation techniques. So after considering these both, I am planning now on customization tools and wait for the correct prosthetic hand or will opt for hand transplantation once it reached more success.

I will share a humble thank you video very sooner with details and snapshots of my customization tools.
I am working on developing my website for communicating with all of you and I will share it in my new update.

Thank you all for supporting me.

After my surgery the wounds were left open and that has caused the skin on my arms to become flabby. So I might have have to undergo another surgery to tighten the skin. Only after one month of this surgery I will be able to go ahead and get the prosthetic hand.

I have decided on which type to hand I want to get, but the charges are around 35-40 Lakhs. We are trying to talk to the dealers to reduce the price and give me a discount.

As of now I am not taking any medication. Only after the surgery I will be taking medication for 2 weeks. Otherwise I am doing good and using my laptop as well.

Thank you all so much. I am very grateful to each and every one of you.

You are sending a message to
Chandra kiran
Go back 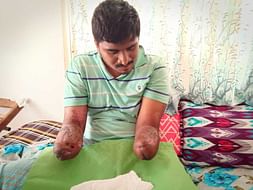