Save 17-Year-Old Veluthangam From A Serious Heart Disease | Milaap

Save 17-Year-Old Veluthangam From A Serious Heart Disease 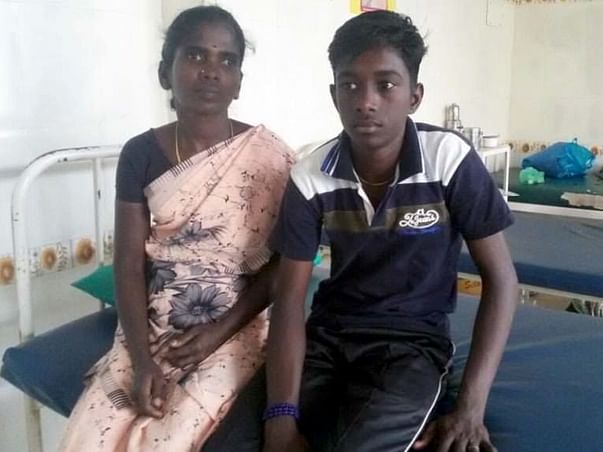 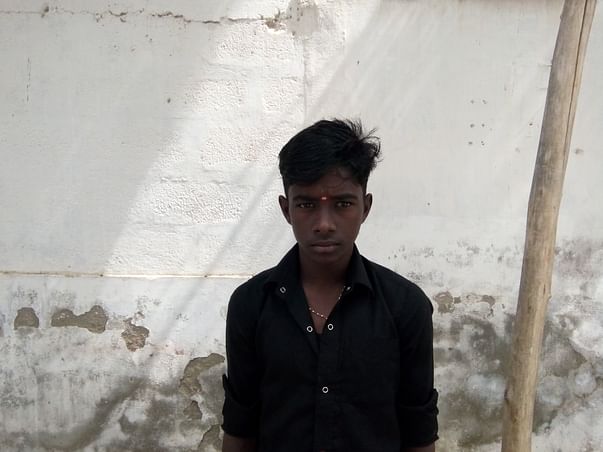 “Velu’s condition is so serious, but he’s more worried about how I’m going to manage. He tells me every day that he doesn’t want me to struggle so much for his treatment. He’s so caring and selfless, but I can’t give up on my son, no matter how strong he’s trying to be for me.”

17-year-old Veluthangam was born with a serious heart disease. He has been living with a hole in his heart and can’t go on any longer without surgery. His mother, Saroja, is desperate to save him, while Veluthangam suffers in silence to not worry her. Veluthangam needs an open-heart surgery at the earliest to survive.

Ten days after his birth, Veluthangam’s mother, Saroja, noticed that he had suddenly lost a lot of weight. Velu was only a baby, and Saroja was worried. She quickly took him to a doctor and his scans revealed that he had a hole in his heart. Saroja was scared but giving up was not an option.

“I was terrified when they told me he had a hole in his heart. He was barely 10 days old, I just didn’t understand what to do then, but the doctors told us that it will heal as he grows up. I was a little relieved, but a part of me was always scared. Over the years, he showed no visible symptoms of illness. I thought my son would be fine.”


Unfortunately, Veluthangam’s latest scans showed that his condition was deteriorating. Veluthangam is a class 12 student, and despite his condition, he continues to go to school. On the outside, Veluthangam looks like a normal, healthy young boy. However, his heart is slowly giving up on him.

Despite her husband’s absence, Saroja is trying her best to save her son

Saroja has single-handedly taken care of her three children for years now. She works as a shepherd and earns a measly amount daily. Her husband is barely at home, and when he is, the atmosphere is unpleasant. He hasn't been of financial or emotional support for a long time now.

“Velu is my oldest son. His father’s irresponsible behaviour has really taken a toll on him. He’s determined to work hard and get a job to take care me and his siblings, but he’s become so depressed. He’s upset that I have to work so hard to pay for his surgery, but he’s my son. I will do anything to save him.”

“I’m trying my best to arrange for 2 lakhs for his treatment, but I can’t pay for it with my income. I have no one else to help me. I’m desperate to save my son.”

Now, Saroja works extra hard to try and pay for Veluthangam’s surgery, but she’s struggling to manage on her own. Veluthangam needs 2 lakhs for the open-heart surgery and won’t make it for long without it. Saroja is helpless and will not be able to save her son without your support.

Veluthangam has a serious congenital heart disease and will not make it without an open-heart surgery. The hole in his heart is only making him weaker, and the only thing that can save his life is surgery. Saroja is a shepherd, and despite her best efforts, can’t afford to pay for the 2 lakhs needed for his treatment. Veluthangam needs your help.

Your support can save Veluthangam’s life. 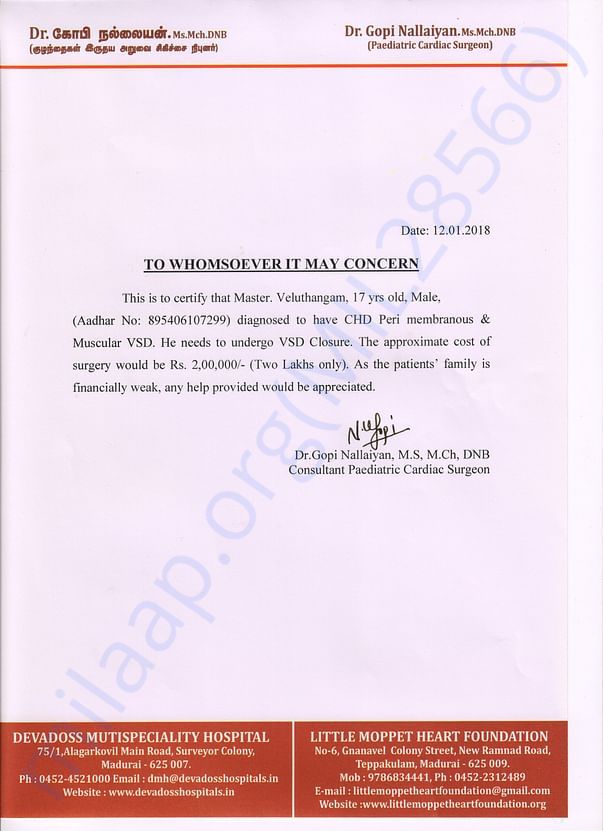 Scan & donate with any app
check_circle_outline Download payment receipt
Report fundraiser
Know someone in need of funds for a medical emergency? Refer to us
Rs.17,121 raised

Donated to this campaign via Bank transfer/QR Code? Click here if you can’t find your donation listed below.
R
RAVEENDRAN donated Rs.501

On this Shivaratri day I pray lord shiva to bless with good health, ayashu prosperity in your life

May Sai Bless You !

All the best Dear !

Donated to this campaign via Bank transfer/QR Code? Click here if you can’t find your donation listed below.
R
RAVEENDRAN donated Rs.501

On this Shivaratri day I pray lord shiva to bless with good health, ayashu prosperity in your life

May Sai Bless You !

All the best Dear !

Save 17-Year-Old Veluthangam From A Serious Heart Disease