Father Buried In Debt Struggles To Save His 9-Year-Old Son | Milaap
This is a supporting campaign. Contributions made to this campaign will go towards the main campaign. 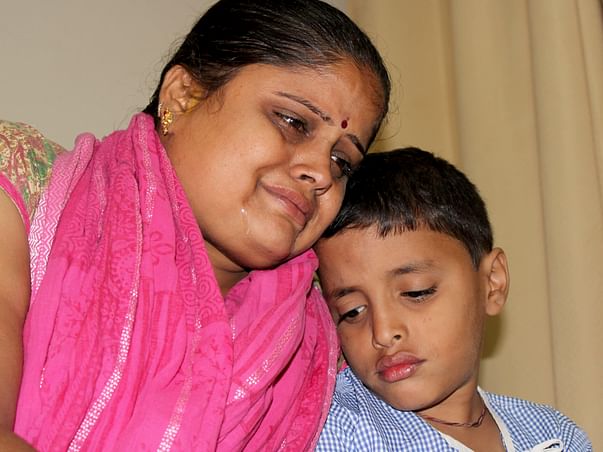 Little Ullas’ favourite time of the day is walking to school with his father, Prabhakar. Clutching on to his school bag and his water bottle dangling from his neck, Ullas hops and skips his way to school while telling his father all the things he will do with his friends that day. Prabhakar smiles, and pats him encouragingly, all while worrying about his son’s impending treatment. While Ullas looks like every other child his age, his body, isn’t. Ullas has been fighting a deadly blood disease for 9 years now and getting blood every month just isn’t enough to keep him alive. Prabhakar has less than two months to arrange 43 lakhs for Ullas’ bone marrow transplant, but after years of medical expenses, Prabhakar is lakhs in debt and has no way left to save his only child.


“The past few years have been incredibly difficult for all of us. We found out that my wife also has a blood disease a few years ago, and she was asked to stop working at the garment’s factory owing to her ill health. Ever since then, I’ve been the sole breadwinner of the family. I’m trying to do my best for my family, but now I have nothing left. We couldn’t even celebrate my son’s 10th birthday last month because I have no money. His condition will only worsen with time.” – Prabhakar, father.

Ullas loves going to school and playing on the cycle with his neighbourhood friends. For the first two weeks of the month, Ullas is active and cheerful, and watching him play in the house, his parents sometimes forget about his illness. However, as the month progresses, his parents begin to worry about him. Ullas gets weaker, eats less and looks extremely pale. That’s when they know that it’s time for his blood transfusions - the only thing keeping him alive since he was a baby.


“He was hardly 1 when we found out that there was something wrong with him. He started getting blood every month, but no one could tell us what the disease was. All the tests that they ran came back normal. All they told us was that he needed blood every month. Ever since then, I’ve taken him to numerous hospitals over the years, only to return disappointed. I had almost given up. I had decided to continue treatment as long as I could.”

While his parents have finally found hope, the treatment is more than they can ever afford

After 9 years of struggle and unanswered questions, Prabhakar and Chandrakala found a ray of hope to save their only child. Ullas was diagnosed with Hemolytic Anemia two months ago, an extremely rare disease that affects one in 10 million. This is the condition in which the body destroys the red blood cells and removes it from the bloodstream, and the bone marrow is unable to produce enough red blood cells. The disease can over time affect the spleen, liver and heart. Now, Ullas needs a bone marrow transplant at the earliest to survive. After all these years, his poor parents have finally found a way to save their son, but have no means to afford his life-saving treatment.

Prabhakar lays granite in buildings and earns Rs. 10,000 a month depending on the availability of work. With this, he has to take care of his son’s treatment and tests, and also run the house. Prabhakar has now run out of all his resources and has no one to turn to for help. As the weeks pass by, he only feels more helpless than ever. Prabhakar is already 18 lakh in debt and has spent all his savings on Ullas' treatment so far. Prabhakar and Chandrakala are desperate to save their only child, but after 9 years of an uphill battle, they need your help.

Ullas needs a bone marrow transplant at the earliest to survive the deadly blood disease that he’s been living with ever since he was a baby. Prabhakar has worked very hard to continue his treatment all these years, but can’t afford the life-saving transplant now. Ullas’ only chance of a healthy childhood is the transplant, and you can help save his life.

UPI: givetoprabhakara3@yesbankltd (Copy to clipboard)
Or
Click here to read the instructions before you make a bank transfer. 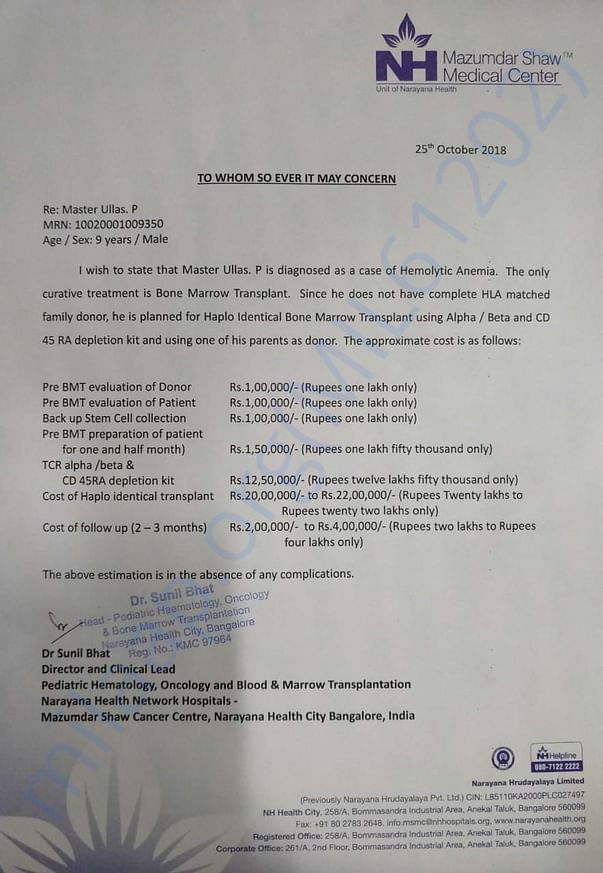 UPI: givetoprabhakara3@yesbankltd (Copy to clipboard)
Or
Click here to read the instructions before you make a bank transfer.

Ullas is doing well. He came to the hospital for follow ups, day care admission and blood investigation.

Ullas is continuing his treatment, and he has completed one cycle of chemotherapy as of now.

Thank you all for supporting him, and please keep him in your prayers.

Thank you all for your wonderful support.

Ullas is suffering from hemoglobin problem due to which there is loss of blood so we will have to take him for regular blood check up once a month. Doctors have planned to do bone marrow transplant as the treatment to recover from loss of blood. They have informed that I will be the donor (father).

When the blood count reduces, he will loose strength and his whole body becomes whitish in color and then we have to immediately rush to the hospital.

Please pray for his health and continue to share the campaign to help us raise more funds.

G
You are sending a message to
Gangappa
Go back 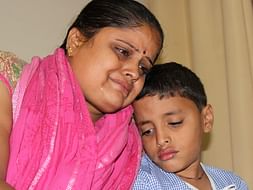