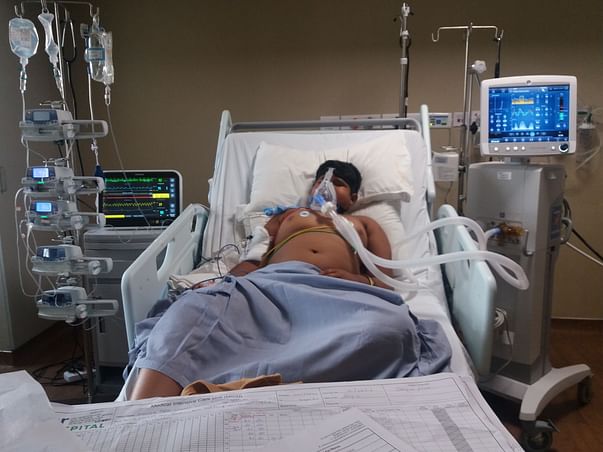 Share
10-years-old Syed was enjoying life like any other normal kid. He was very eager for Eid celebration with his family. Little did he know that a normal fever will take away all excitement and push him to a situation where he cannot even breath without ventilator support.

Syed has been in ICU for weeks now

Syed was down with a fever from August 18th. His family thought that it was due to the weather change that he is having health issues but took him to a local hospital for a checkup. The doctor confirmed it's viral fever and gave medication for relief. The only concern for little Syed was to be fine before Eid so that he could enjoy with his friends and family. But his health condition showed no improvement and from the third day, he started vomiting.  He could not digest food at all.

The next hospital they took him to, Syed was just kept on glucose with no proper treatment or diagnosis. His father Kumair Pasha was worried that Syed is not keeping well but had no idea what is actually wrong with him. After keeping his son in the hospital with practically no treatment, he decided to take him to some other hospital. A fresh set of blood test revealed that he has dengue and his condition has worsened because of wrong treatment in his hometown hospital. He was immediately rushed to a hospital in Bangalore where it was finally confirmed that he was suffering from dengue with an infection in the liver. For the last 15 days, Sayad is in ICU. His lungs are filled with fluid, making it very difficult for him to breathe without support.
"We have been spending sleepless nights in the hospital hoping that he would be fine soon. He has not eaten anything from past 15days. I spend each night in this chair just praying for his life."

With almost no income, Kumair Pasha is finding it impossible to continue his son’s treatment

Kumair had to shut his business before 3 months because of heavy loss. Now he manages his expenses doing some petty jobs. He has used up all his savings and even had to sell his wife’s jewellery to arrange funds for the treatment so far. Now it is impossible for him to arrange 4Lakhs which is needed to continue Syed’s treatment.
How You Can Help
Your contribution can help to continue Syed’s treatment. Your support is the last resort for Syed to breathe without ventilation. Help this little boy get back his life.