Help Swapnil (Organisation Of Children) To Built Their Building | Milaap

Help Swapnil (Organisation Of Children) To Built Their Building 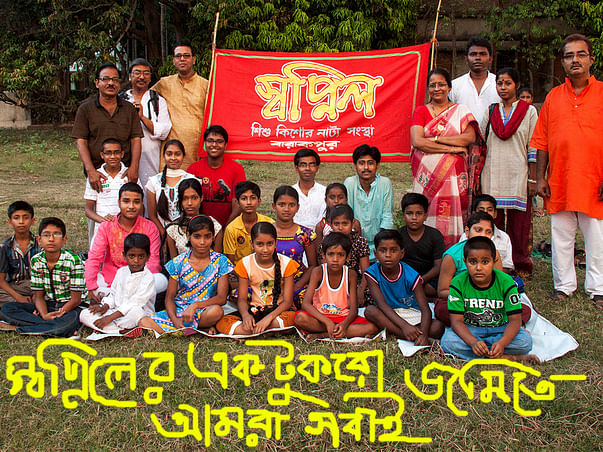 ABOUT SWAPNIL
Tuski, Raj, Ritam, Bubai, Piu, Priya, Punam and many more children – it’s a kids’ land – it’s a space for them to freely breathe. Each SUNDAY either they adorn themselves as actors rehearsing their parts or they sing aloud. Or may be they engage themselves in crafts with waste materials and rejectables. At times they are found walking and walking on with forests to follow along the river, into the grass, half immersed, knowing the Mother Nature bit by bit.
Yes, thus we, the Swapnil Family has been toiling and struggling for last 15 years to enable each and every child to find a dignified identity in the society. Parents of these children hailing without exception from low income groups dare not to even dream of spending money on them for learning music or theatre. Shampa’s father, as for instance, thought it was a better option for their daughter to get married as soon as she completed her H.S. course successfully than allowing her to pursue theatrical activities with our guidance.
Faculty members of Swapnil rushed to her father, reassured him about our support in continuing her studies along with theatricals. So Shampa one day could successfully qualify in the curriculum of the National School of Drama (NSD) and at present she is doing a job in NSD Repertory.
Parents of Suraj toil hard from dawn to dusk to make their both ends meet. Though Suraj was not a very brilliant student in school he never failed in any examination whatsoever. But worth mentioning is the fact that whenever he performed as actor in any play staged by Swapnil he never failed to secure a prize or award for himself. Pursuing his passion for theatre now Suraj is an avid student in the Post Graduate course in Drama at Rabindra Bharati University of Kolkata.
Thus we are trying to fulfill our dreams. Till now almost 150 students coming in close contact with Swapnil have been learning mime, social taboos & superstitions along with music and theatre. They are taking up active roles in “Save the Echo System” programmes. They are organizing educational, inspirational and mass awareness functions. In brief they are all engaging themselves in upliftment of the whole area wherein they live.
Next dream of Swapnil is to make the less privileged children of this area financially more able along with enhancing their intellectual capacity. To attain this we need a building of our own. Swapnil, aspiring to make a dreamland for the kids, has already bought a piece of land to erect a building on it one day with accumulated help from generous hearts.
Once hopefully when the building is erected we shall be able to spread our wings in other activities. We shall be imparting multiple vocational trainings to the children so as to enable themselves to earn something on a regular basis. For our dreams to come to fruition we need your help and support.
Swapnil believes that there are millions of good people around us. It is a matter of time only for us to reach them asking to lend their whole hearted support for a noble cause.
Your hard earned money when gifted to us will find new significance and meaning in the lives of so many poor children living in perpetual penury.
Do please come forward to help the children to bloom with passage of time. Be with us, belong to them, the less fortunate.
Our Aim :
We dream of enhancing the childrens’ intellect and alertness as well as their money earning ability through various training programmes conducted by skilled guides.
We aspire to create an all round development of the habitats and inhabitants of our district 24 Parganas (North).
Plays we have staged so far :
Kochi Patar Kanna (Tears of Green Leaves) – 2004
Prabanchana (Deceit) – 2005
Khokkosh Desher Rakshasta    -   2006
(The Monster of the Demon Land)
Indara (The Well) – 2007
Daak Ghar (Post Office) – 2007
Khyatir Bidambana (Torments of Fame) – 2008
Sonar Harin (Golden Deer) – 2008
Budo Lokta (The Old Man) – 2009
Ak Boka Rajar Gappo (The Tale of a Foolish King) – 2010
Indurer Bhoj (Feast for Rats) – 2011
Baly Sugreeb Kakhon (When was Baly and Sugreeb) – 2012
Aborjana (Garbage) – 2012
Mataram (To the Mother) (Hindi Play) – 2013
Hiz Biz Biz (Nonsense) – 2013
Pehle Aap (You First) (Street Play) – 2014
Organising competition of Threatres – 2016
NEW PRODUCTION – Banglar Mukh (Face of Bengal) – 2017
As our guides and advisors we have got the following
named august personalities   –
Tirthankar Chanda, Adrija Dasgupta, Goutam Mukherjee, Raja Guha, Debashis Roy, Anirban Bhattacharya, Subhashis Ganguly, Tathagata Chowdhury and Abhijit Sarkar.

S
You are sending a message to
SWAPNIL
Go back 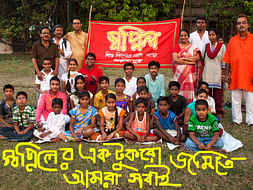 Help Swapnil (Organisation Of Children) To Built Their Building