Despite Undergoing Transplant,8-Year-Old Needs ICU Stay To Survive | Milaap
This is a supporting campaign. Contributions made to this campaign will go towards the main campaign.
This campaign has stopped and can no longer accept donations.
Milaap will not charge any fee on your donation to this campaign. 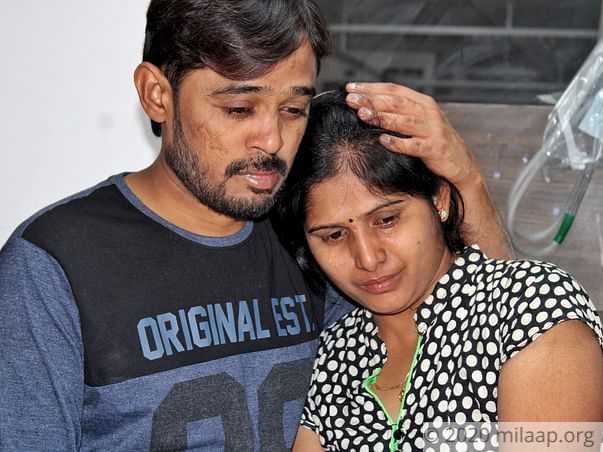 “We thought his fight with a dreadful blood disease was over after the transplant. We used all the savings we had and even borrowed money from others to make it happen. I thought all his suffering has finally come to an end, but it isn’t. My son has been lying unconscious in the ICU for the past 20 days because of a dreadful infection that has spread to his entire body. All I wanted was for my son to live a normal and healthy life. But now I don’t have any money left for his treatment.” - Sridevi, mother

Little Sushank needs to stay in the intensive care to recover. He can only fight this dreadful infection with your help.

Sushank's skin started turning unusually pale when he was just 3 months old. Worried, his parents took him to the local doctor in Bathalapally, Andhra Pradesh. After a series of tests, he was diagnosed with Diamond Blackfan Disease, a rare inherited bone marrow failure syndrome characterized by a failure of bone marrow to produce red blood cells. As he was too young to undergo a transplant, the doctors advised Sushank to undergo blood transfusions every time his blood counts drops dangerously low. And so, for the past 8 years Sushank has been surviving on blood transfusions.


Sushank before he underwent the transplant

His fight isn’t over yet

Sushank was slowly recovering from the transplant and his condition was gradually improving. However, a few days after, he started having difficulty in breathing. His parents got worried when he was gasping for air. Sushank was immediately admitted in the ICU. Because of a dreadful infection, Sushank’s vital organs stopped functioning and he was kept on ventilator support. Sushank is slowly making progress and is currently undergoing treatment. He needs to continue his treatment for a few more days to recover from the infection completely.

Bhaskar works as a lab technician earning a meagre income of Rs 10,000 per month. To save his son from the severe blood disease, he spent Rs 12 lakhs for the transplant by using all his savings and even borrowing money from others. But now after using everything that they had for the transplant, they are in desperate need of help to save their son from severe infection.

“I have left my job in Bathalapally (Andhra Pradesh) and moved to Bangalore three months back just for my son’s transplant. Now having no source of income and not even a single rupee left, I can’t afford the treatment my son needs.” - Bhaskar, father

Sushank can only survive with your help

Sushank needs to fight one more severe infection to get better and go back home, but lack of funds stands in his way. His parents have exhausted all the money, they can save their son with your help.
Estimation letter 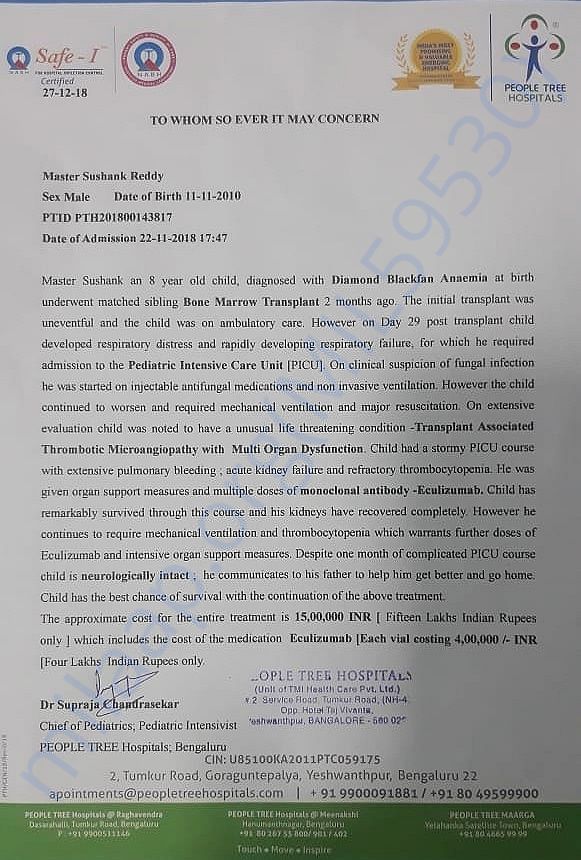 Sushank is no more with us. Sushank was undergoing his treatment but his health deteriorated and he couldn't make it.

DS
You are sending a message to
Dr. Supraja
Go back 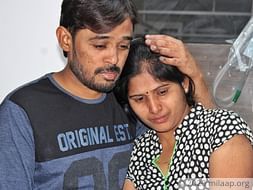