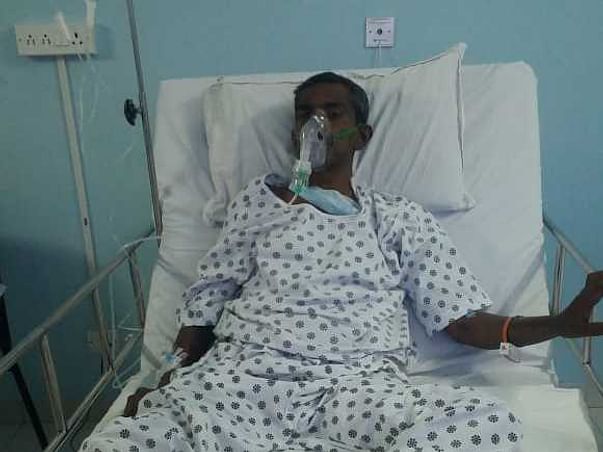 Share
For the last 8 years Sunny was suffering from Cirrhosis of liver and chronic Diabetes mellitus. He was manifested with severe hematemesis and abdominal pain in the earlier stages and diagnosed as Cirrhosis of liver by Doctors of Pariyaram Medical College, Kannur, Kerala. Then for a better treatment we took him to Amrutha hospital, Ernakulum. Later we were forced to discontinue the treatment and resume it at Pariyaram medical college, since we could not afford the cost of the treatment.  His treatment was switched to Pariyaram Medical College.  Since then he was suffering from many complications of Cirrhosis of liver and was unable to do any work. In between he has got Incisional umbilical hernia and had herniorhapy in 2018. But after herniorrhapy his condition got worsened, manifested by swollen extremities, distended abdomen, indigestion, severe abdominal pain and profuse body ache. He was taken from pariyaram to Mangalore K S HEGDE MEDICAL ACADEMY, Derlakatte, there the team of Doctors suggested having immediate liver transplant, suggested to consult Dr. Venugopal of KIMS hospital, Trivandrum. The doctor advised to have an immediate liver transplantation before December 2018 though it is too an expensive resort.
Two weeks ago 23/10/2018 we received call from Dr.Venugopal KIMs that they have received liver a 49 year man who had died and reach within 9 hours to hospital. There was not much time left to think more. Placing all trust in God we agreed and went to hospital by 11am we reached hospital. Luckily the liver was perfectly matching and so we decided to go ahead with operation though the result showed urinary infection. So he underwent liver transplantation at KIM’s hospital Trivandrum, Kerala, India. After surgery he is getting on and has to be in transplant ICU for 14 days and 7 days in Special room. We have to arrange a house near KIMS hospital since our hometown is about 650 Km away from the hospital. Doctors have cautioned us that he may have complication up to one year thus he should have an intensive care to avoid complications. His follow up medications are costly and he has to take some additional medications to tackle complications from slightly impaired kidneys and childhood TB.
After this operation doctors recognized him with an infection in his brain. Doctors again did a surgery on his brain in this regard. But after that surgery he has not open his eyes. He is alive, but in very critical situation, right now he is in ventilator.