This Boy Screams In Pain Because Of Liver Disease, Needs Urgent Help | Milaap
This is a supporting campaign. Contributions made to this campaign will go towards the main campaign.

This Boy Screams In Pain Because Of Liver Disease, Needs Urgent Help 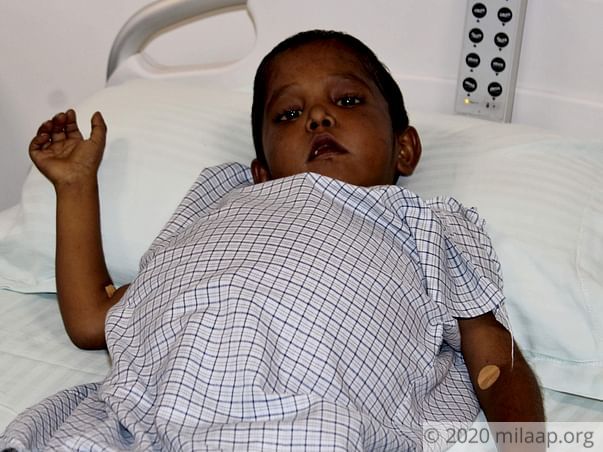 As the nurse approaches little Sudarshan for his blood test, he starts breathing a little faster, tears welled up in his eyes. His withered hands tightly grasp his father's, and his loud, piercing cries break the silence of the ward. With the little energy he has left, he hugs his father, his yellow eyes begging for him to be carried. “I don’t want this appa, I want to go home!” he says. Heartbroken, Paramanand gently tries to move him, But after all these months of holding back his tears, Paramanand can’t help but break down. “He’s been in so much pain because of his liver disease, I just can’t watch him go through this anymore. Every week he’s losing more weight, he’s so frail. He can’t even walk on his own.” Little Sudarshan’s liver is now failing. As he clutches his painfully swollen stomach and cries, Paramanand and Renuka try to pacify him, all while worrying about his impending treatment, the only thing that can save his life – a liver transplant.

Little Sudarshan’s laughter used to light up their house, but now the liver disease has stolen his happiness

Until one year ago, the weekends at Paramanand and Renuka’s small, humble home in Bijapur, Karanataka, were the noisiest. With all four of their children running around, playing hide and seek, their home was filled with joy. Sudarshan loved playing with his three sisters. He was happy going to school and would never miss a day. Once he was home, he would ride down the road on his favourite cycle. He was active, and always on the go. However, six months ago, Sudarshan started falling sick. His fever didn’t subside, the yellowness in his eyes increased with each day, and he was only getting weaker.


“We took him to so many hospitals and doctors, but no one could tell us what was wrong with him. He would cry all night, and we didn’t know why. All we knew that he was getting sicker. Soon, his stomach started swelling.” – Paramanand, father

After months of struggling, Sudarshan was diagnosed with a severe liver disease for which the only cure is a liver transplant. Sudarshan doesn't have long to get the transplant, and his parents are desperately trying to save him.

In a desperate attempt to save his son, Paramanand is going to everyone he knows – but in vain

Paramanand has barely slept since the day Sudarshan fell sick. When he’s not working as a daily wager, taking every job he can get, whether it’s construction or that of a helper, he’s knocking on the doors of his relatives and neighbours begging for help. Sudarshan hardly earns Rs. 250 in a day, and now he’s running out of time to arrange for the funds required for his son’s liver transplant.


“He needs the transplant as soon as possible. We only have time till December. I don’t know how I can arrange so much money in just a few weeks.” – Paramanand

Paramanand is doing all he can. He’s trying to stay strong for his family, especially his devastated wife who prays for her son’s recovery every day. She’s a matched liver donor for Sudarshan and is ready to do everything she can to save him, but their dire lack of funds stands in the way.

Sudarshan’s condition is getting worse with time. He can’t walk without his legs trembling because of the weakness and has to be carried around everywhere. He hasn’t gone a day without pain in the last six months. Only an urgent liver transplant can save him now, and his parents have no means to afford it. Little Sudarshan longs to be able to play with his sisters again, he wants to walk and run, and be the happy child he was. Your help will save his life from this dreadful disease.

UPI: rzpy.givetomlpsudarsha006@hdfcbank (Copy to clipboard)
Or
Click here to read the instructions before you make a bank transfer.

UPI: rzpy.givetomlpsudarsha006@hdfcbank (Copy to clipboard)
Or
Click here to read the instructions before you make a bank transfer.

Sudarshan is doing well. Today was his birthday and we all celebrated it together. Here is the picture of birthday boy. We all pray for his speedy recovery.

Thank you all for supporting Sudarshan.

He will be undergoing the transplant this week with his mother, Renuka as the donor. He is at home as of now.

Do keep him in your prayers!

Thank you for the immense love and support shown towards Sudarshan.

He is presently at home and his symptoms are persistent. The abdominal swelling and pain are still present, he is also unable to eat well and has indigestion. His mother has been identified as the potential donor but still has a few final tests pending. Once we have enough funds we should be able to go ahead with the surgery.

Please continue to support him by sharing his campaign with your friends and family!

Donated to this campaign via Paytm? Click here if you can’t find your donation listed below.
T
TPAF donated Rs.250,000

Donated to this campaign via Paytm? Click here if you can’t find your donation listed below.
T
TPAF donated Rs.250,000

T
You are sending a message to
TPAF
Go back 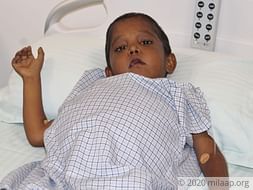 This Boy Screams In Pain Because Of Liver Disease, Needs Urgent Help