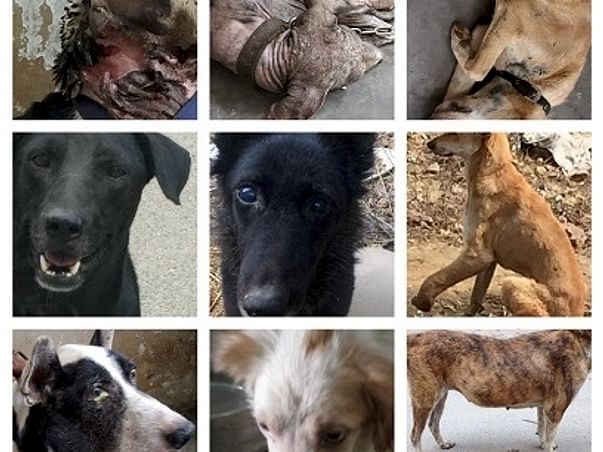 1. Chicken(Funds Raised)- Hit and run accident case, left her with disabled front paw and a swelling on her front leg elbow. She was in this condition since 2 months on road in Sector 135, Noida. Finally she was caught and sent to help Helping Hands, Dadri for treatment, and it will be sometime till when is fit to be released back to her location.
We needs Rs.6300 for her treatment.

2. Sheru- Found in sector 22, Gurgaon in a devastating state of eye completely damaged and popping out. Overnight ambulance was arranged and Sheru was sent to Helping Hands, Dadri for his surgery and healing. There we got to know he is suffering from penile tumour also. God knows how much these animals have bearing power.
We need to raise Rs.11900 for husband treatment, stay and surgery.

3. Mishti- this blind kid is a permanent resident of Helpung Hands, Dadri. She was sent from Sector 21, Gurgaon as being blind it was dangerous for her to Ben on the road. But her eye issues have not till date been sorted. We are also looking for a virtual pet parent for her. Currently we need Rs.14600 to be raised for her.

4.Momo(Funds Raised)- When will as humans know that life is precious and stop to help other life forms. Momo was found in Dwarka Sector 10, Delhi with his front leg completely swelled up and bent. He was sent with the help of animal vokunteers of Dwarka to Helping Hands, Dadri. There we need to pay Rs. 8300 for his treatment.

5. Radha(Funds Raised)- Aged dog living her life on busy Gurgaon streets. Spotted at Jwala Mill Road, Gurgaon in a very bad condition. Unable to walk properly, emancipated, and what not. She had a huge tumour in her chest region, which slowly killed her. Helping Hands, Dadri tried their best to save her but she could not live again. We still need to clear her vet bills of Rs. 8250

6. Kali(Funds Raised)- This girl loves going to Helping Hands, Dadri. She was admitted earlier also for ascitis and this time again she developed ascitis and tick fever. She stays in Sector 29, Faridabad and now has come back to her location. But her vet bills are pending which we need to clear and that is Rs. 8000

https://www.facebook.com/798750686869245/posts/1774248265986144/
7. Kalu(Funds Raised)- This kid was found at Race Course Metro Station, in a condition which no human being should have neglected. Emancipation, with tumour in tail, fracture in hind leg, what not. This kid must have seen bad side of life where even though he gets food regularly but medical aid was very far from him.
Raising Rs. 6500 for him....

Now they both are at helping hands, Dadri safe and sound away from breeder who neglected them

9. Chutku(Funds Raised)- this kid was rescued with such a bad case of broken spine and with no scope of ever walking. Sophie Memorial, Kaveri Bharadwaj agrees to take chutku in and keep him as he was on road for good number of months. But even after all the efforts and care of Kaveri ji maybe destiny had different plans for chutku, he left us........
Trying to raise Rs. 5500 for his 1 month's treatment...

https://www.facebook.com/798750686869245/posts/1854377927973177/
10. Kai(Funds raised)- He was rescued from Sector 135, Noida in a state where maggots had been eating his neck and would have reached his brain in no time. He was not in a condition and situation where on spot treatment could be given to him. Ruchika ji of Nishabd Ramgya, Dadri, readily agreed to take him in and get the treatment started. He is recovering and will be released by God’s grace soon.
We are trying to raise Rs.3000 for Kai’s treatment, stay.

She would have number of puppies in her life though few would have survived...

Her reporter Ankit contacted Jagdish and through his ambulance she came to us from Mayur Vihar Phase 2, East Delhi

We need your prayers and funds to help her recover and be sent back to location hale and hearty.

Momo has been released but his dues are yet to be cleared.

The swelling on his injured leg has come under control and his medicines are off for past 1 week. He is very well maintaining on his own, without medicines. His CBC is also okay and now he is fit and healthy for release...

We just pray he won't met with another accident, otherwise it will become hard for us to control his leg from getting amputed (which we don't want)...

Please keep him in your prayers and we will keep an eye on his heath conditions on regular basis with his care taker..

Initially we tried to raise 2500 for his medicines charges and waited for recovery, so that we an decide whether to ampute his leg or not.. and fortunately we were able to save his leg from getting amputed.

He was found in Udyog Vihar,Gurgaon with big lump on his throat .Since past couple of months Kalu has been staying at Helping hands as he has undergone surgery twice. But due to a tiny hole in his salivary gland, this liquid keeps on accumulating again and again. We had initially got the funds for Kalu from his reporter but we will not be able to release Kalu due to his reoccurring condition. We are looking out for a virtual parent for kalu Rs 3000/month.

More than 500 ml of saliva stored out side his salivary gland, below his neck,, has been drained out yesterday... (Can be seen in video)

He is in such a relief since then...

This old boy met with an accident in Faridabad Sector 81 and was at the side of the road for don’t know how many days...

Anuj Kaushik who passes that way for office posted about him in one of the Fb group...

Animal lovers swung into action and arranged the ambulance and rummy was recieved at our shelter...

He can never walk due to spinal injury and has severe mange also...

His treatment has been started immediately for mange as well as for strengthening of bones as he is very weak and hardly able to drag himself even...

Please help in giving him a comfortable life and to again built a bind between humans and him. https://www.facebook.com/helpinghandsforanimals/posts/2125068224237478

15.PANEER
Paneer, our old champ was released a month bach after healing from hip dislocation problem. But unfortunately landed up in fleas and ticks problem in this old age. And was again send to us for his treatment.
We are raising 4500 towards his treatment expense which includes
400 for CBC charges
1200 medicines for fleas, ticks and one wound on his back. And calcium multivitamin for his old age and bone strengthening.
2900 towards his boarding fees
Please help us to raise the pending dues.
https://www.facebook.com/helpinghandsforanimals/posts/2223157244428575
16.JHUMRI
Newly sterilized, came with bleeding from nose...
#Jhumri was not eating, was in subconscious state and was biting because of irritation.
After detail checkup and blood test; her disease was diagnosed "TICK FEVER"
Her treatment has been started instantly and her condition is under control now.
Please pray for her speedy recovery.
We are raising rs. 4,600/- towards her treatment expenses which includes
CBC of rs.400, medicines of rs. 1600, and boarding fees rs. Rs 2,600/-
https://www.facebook.com/search/posts/?q=JHUMRI&epa=SERP_TAB
17.ELLY
Loosing every single hair from _ELLY's_ body must have taken 2 months of gradual time. And more importantly, no one noticed this happening with him...
Fortunate his fate that he came under notice of ms. Khushboo and has been rescued now and is under treatment and observation.. If everything goes well, he may take 3 months of time to fight from this disease/disorder and come up like a champ again and start living life king size...
We are raising 10000 towards his treatment expenses for 3 months which includes
400 CBC charges
2600 medicines charges
800 calcium multivitamin tablets for 3 months
6200 boarding fees for 3 months time.
https://www.facebook.com/helpinghandsforanimals/posts/2409778169099814
18.MOTI
Moti was reported on Facebook by #Vishal_Rana ji, with a big swelling on his neck..
Link of the post::
https://m.facebook.com/groups/19045359536?view=permalink&id=10156666587114537
Moti used to live in vasundhara sector 15 , when Mr Rana notices him with this huge neck and malnourished body..
With the help of posting and sharing on fb and volunteer of ghaziabad, moti got rescued and shifted to our place for treatment.
On detailed examination, doctor declared it a "tumor", with excessive swelling. And has prescribed medicines for 10 days to lower down his swelling, once the swelling is lowered, we can proceed further for operation.
So right now we Are raising 2700 for his 10 days medicine course plus blood test for CBC urea and creatinine tests.
https://www.facebook.com/helpinghandsforanimals/posts/2436864246391206
19.BOLT
BOLT used to live on roads of ELDECO MALL, Faridabad...
One day a unknown animal lover noticed a big maggot wound on his neck and called multiple people for help ..
One fine day,, after 7-8 days of follow-up and visits, he was caught and now brought to us for treatment...
His wound may take 1 month of time to heal completely..
We are raising 6000 towards his treatment expenses for 1 month which includes
400 CBC charges
2600 medicines charges
3000 boarding fees for 1 month
https://www.facebook.com/helpinghandsforanimals/videos/vb.798750686869245/758384021265614/?type=2&theater
20.SCOOBY
This calm and friendly girl used to stay in the campus of Genpact Sector 135, Noida
Scooby has always been on the wrong side of destiny and bore the brunt of the sticks and stones thrown by the guards of the campus.
Lately she was picked up and sent to an unknown shelter for close to 20-25 days and  was no where to be found
Finally she was found back again in campus but this time she returned with the dreaded disease of distemper

Plz come forward and help us in saving Scooby

UPI: rzpy.givetomlpkhushbus001@hdfcbank (Copy to clipboard)
Or
Click here to read the instructions before you make a bank transfer.

hank you all for donating to our campaign, our NGO needs money on urgent basis hence withdraw the amount so as to help the NGO.

Will be giving this amount to Helping Hands for Animals for BOLT treatment amount and whatever left will be paid after more collection.
Dear all,

We have added more cases (12) and updated few old ones, around 7 of them, for whom funds have been raised. Details are available in the story section of the page.

Thank you for your continued support.

Regards,
Khushbu.
We have increased the goal amount as more cases are added into the existing ones . Thanks for your continued support!
Load more
Donate

Keep up the good work with our little friends

Keep up the good work with our little friends

KS
You are sending a message to
Khushbu Sinha
Go back 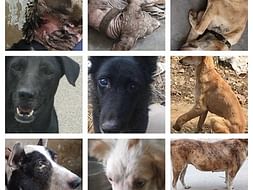