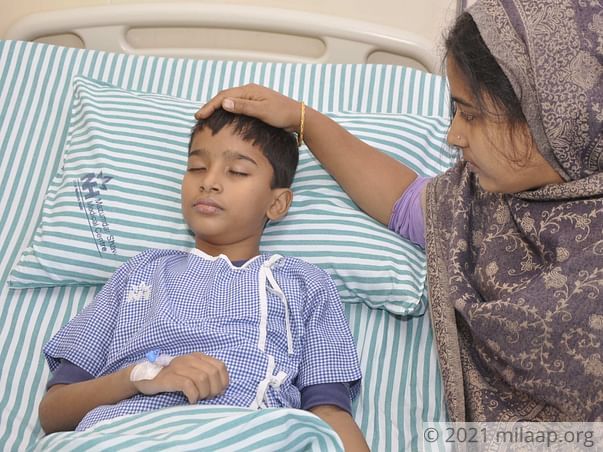 Neither did 9-year-old Shaheed nor did his parents, Samim and Yasmin, have any idea that a dangerous blood disease was growing inside this little boy’s body. They didn’t know that within a matter of few months his condition would worsen so much that he would start bleeding from his gums and even while he was urinating. Diagnosed with Aplastic Anaemia, Shaheed now is in the dire need of a bone marrow transplant in few hours - that is his only hope.

On the doctors’ advice, Samim took a train to Bangalore to get his son the life-saving transplant

“He had high fever and was bleeding profusely. We got so scared. I thought that my son will not live. The doctors told us that he was critical and even a small infection can prove fatal for him. But there was hope for him - a bone marrow transplant. They advised us to go to Bangalore.” - Samim, father.

With a sick child in their lap, Samim and Yasmin made a 29-hour long journey in an overcrowded train in hope of better medical treatment for Shaheed. Every single minute, as they prayed that he didn't catch an infection, they cursed their fate because they couldn't fly him to Bangalore.

An old photo of Shaheed at the zoo

The little boy lives in the constant fear of death

A bright and active child, Shaheed was the topper of his class. His favourite pastime was reading about the lives of great people. ‘Baba, one day I will be like them - serving people, giving a home to the homeless,’ - Shaheed always wanted to help people. But now he hardly talks. His parents haven’t told him anything but his enthusiasm and excitement have been replaced with a  fear that he might not live for long.

Shaheed’s younger sister is a matched donor for him but the soaring costs of the transplant are proving to be a roadblock for the daily wager who earns nothing more than Rs 200 a day. He is the sole earning member of the family and there are days when he doesn’t get any job.


“My wife and I are sleeping on empty stomachs as I have to pay for both of my children’s tests and medicines. I hardly had any savings and whatever I had is already used. The transplant is the only hope for my son and it would cost me Rs 12 lakhs. The doctors have told us that we need to be very careful even after the transplant is over - protect him infections. If we don't have the money, we won't be able to provide the right kind of care - his disease might come back. I have no one else to turn to but you all - please help.”

Shaheed is a bright boy with a great future ahead,but his disease might shatter his dreams. Your help can bring back happiness for him and his family