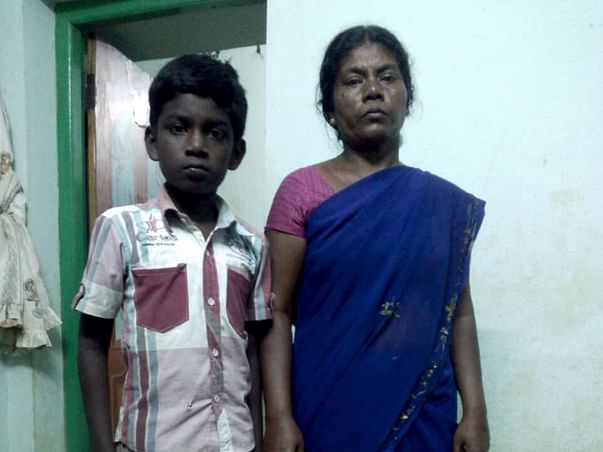 “Why does it hurt so much Amma? Am I going to die?”
Robert is 11-years-old. Diagnosed with a hole in the heart almost immediately after birth, the little one still does not know why he cannot run or even cry without hurting. Unfortunately, as he is now growing, the problem is getting worse. He urgently needs a surgery to save his life. For his father, a daily wage worker this is the end of his world! His son is dying. His mother, on the other hand, is still trying to answer his question.

Robert’s heart problem was diagnosed shortly after his birth

Robert was only 6-months-old when his mother consulted a doctor regarding some lumps near his chest. A scan revealed the hole in his heart. His parents were really upset but were told that there was still a chance of him recovering on his own as he grew up.

But the problem got worse.

“We are not even educated enough to understand when we should feel scared. When he was 9, he said it hurt him when he ran or played. I just told him to refrain from it, thinking that would make him better. The doctor had told me we could go for a surgery, but that idea scared me more,” his mother Vasagi says.
2 years ago, a compulsory medical check-up in school revealed that Robert’s heart condition had become far worse. For his parents, it came as a big shock. They had never thought it would end up as a threat to their son’s life.

He needs an urgent surgery.

As the boy grows up, his heart is unable to cope with the needs of his growing body. It is slowly giving way. The doctors have suggested an urgent surgery to fix the problem. This is the only way he can live now.
Robert’s father is a daily wage worker. He cannot even accompany his son to the hospital since his daily wages are just about enough to feed his family each day. He waits anxiously for his wife to come back from the hospital, and tell him what the doctors say.
“We have led miserable lives in helplessness and poverty. Now, our children are our only hope. We want to see them live better lives, and grow up to be like the people we look up to now.”

The surgery that can save Robert’s life would cost his father over Rs. 2 Lakh. The family has no way to arrange these funds within a short period. On the other hand, the little boy is inching closer to death with each passing day.
Your support can save the life of this little boy! 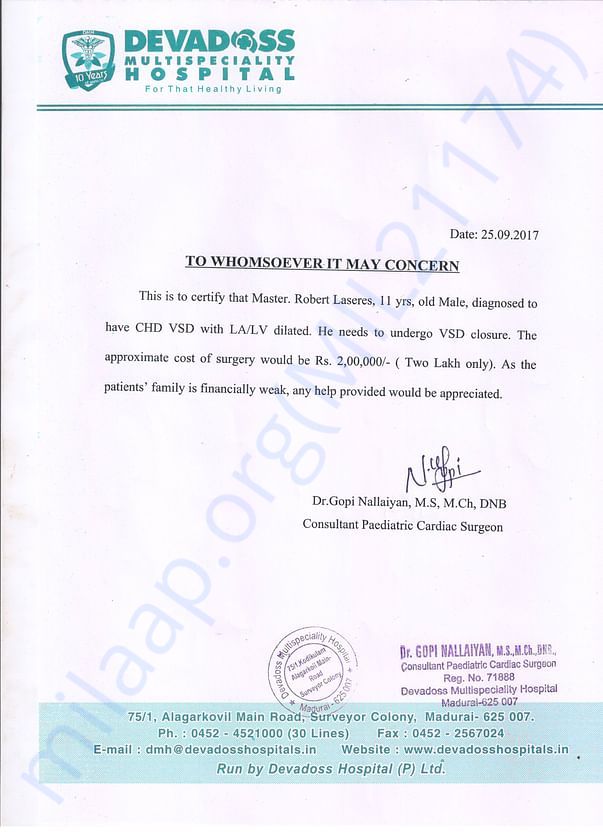 We are happy to share that Robert is going back to school and enjoying his life like any other children.

Thank you all for your wonderful support and prayers.
Dear Supporters,

We like to share a good news with you all. Robert has undergone the surgery on 3rd October 2017. He was discharged from hospital on 7th October 2017. Now he is doing well.

Thank you for all your prayers and support. Please do pray for his complete recovery.
Donate

Report fundraiser
See how thousands are crowdfunding for their causes on Milaap
Rs.149,240 raised 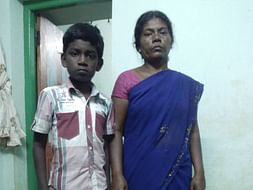