Help Ramakrishna's Family | Milaap
This campaign has stopped and can no longer accept donations. 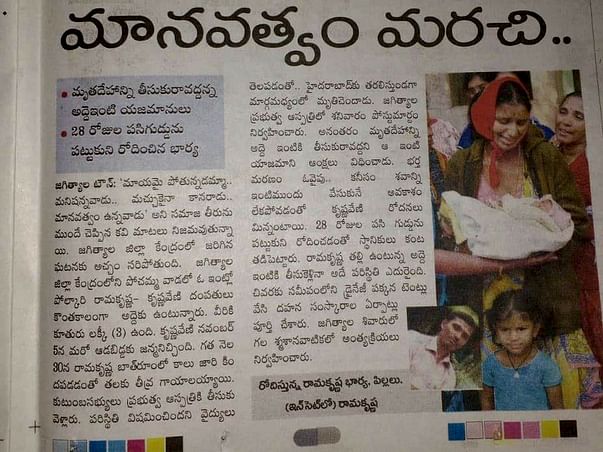 I am Guru Prakash, an alumnus of IIIT Hyderabad (B.Tech, 2015). I have worked as a software developer in Amazon for a couple of years and am currently a research intern in CVIT, IIIT Hyderabad.

On the 30th of November, one of our security guards from IIIT - Rama Krishna(30) lost his life after he slipped and collapsed in the bathroom. Quite young by age, Rama Krishna was sincere at his work and is well-known among the inmates of IIIT for his cheerful yet strict nature. His fellow security guards quoted him as someone who was always ready to offer help when someone was in need!
He used to live in a humble rented house nearby the college with his wife, Krishnaveni and two daughters. His family was probably still celebrating the birth of their second child (who is only 28 days old) when this unfortunate event occurred. It is quite saddening that by the time of his demise, he was the only bread-earner of the family.


A heartbreaking photograph of Ramakrishna’s wife wailing seeing their newborn infant. Ramakrishna can be seen in the inset

His family is unable to cope up with his sudden death and are shattered currently. With a month old infant at home, it is impossible for his wife to take care of the family’s financial needs for at least a few months. The inhumane behaviour of his house owners who restricted his family from bringing his dead body to the house has broken his family more!

In such adverse situation, the only way we can help his family is by giving them a bit of hope and financial support. Infact all the security guards in IIIT Hyderabad have already taken an applaud-worthy step by donating their one-day salaries to his family.

Let’s all give the family a ray of hope for a better future by contributing some amount to this campaign. The money collected will be handed over to Ramakrishna’s family in the form of an FD so that it can be used to take care of their basic necessities like shelter and food every month. As fellow humans, it is our duty to help the family rebuild their crushed spirits with whatever help we can offer.
Newspaper report

Ask for an update
Donated to this campaign via Paytm or bank transfer? Click here if you have not received an email confirmation from Milaap.
Sorry for the late update.

Special thanks to every single person who donated for this cause. You all have been a huge help.

We have opened 2 Fixed Deposits of 75K worth, for each kid. Remaining amount of Rupees 69906 was transferred to their mother's account.

Thanks to Milaap, Prashant Garapati (for the initiative).
Dear Supporters,

Thank you for all the support you have shown. With all the funds raised towards this campaign, I will be making two separate Fixed deposits in the name of both the daughters of Ramakrishna.

Thank you for the support once again.

Hope they get better life bless them

Hope they get good life..

Hope they get better life bless them

Hope they get good life..

You are sending a message to
Guru Prakash
Go back 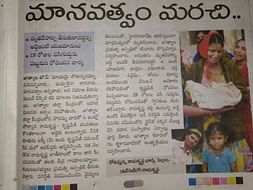