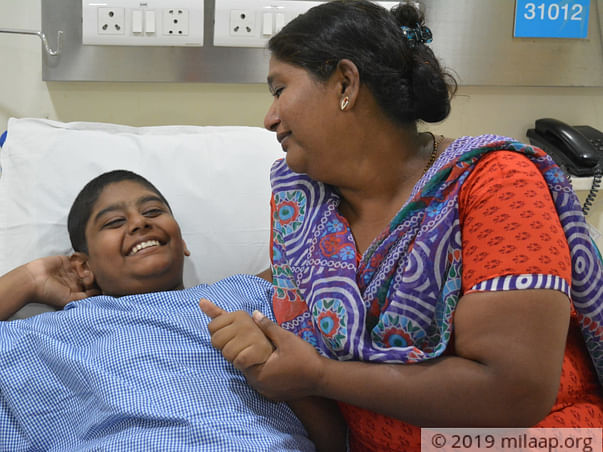 14-year-old Prajwal is way stronger than his peers. Prajwal knows he has been diagnosed with a rare case of cancer and that his chances of survival are minimal. He is also aware that he would be soon losing his right leg forever. None of this dreadful news seems to sway Prajwal from enjoying the small things in life like teasing his mother for crying or munching on his favorite snack.

“It all started with a small tumor on Prajwal’s right thigh about a year back. Initially, we didn’t give much attention to it thinking it could be a heat boil. Only when the tumor started growing rapidly, I took my son to the hospital. I had not been prepared to hear that my son’s life is in such danger and I could lose him if not treated on time. He has a rare kind of cancer called Clear cell sarcoma soft tissue.” – Shobha, mother

“I wanted to become a police officer. Now, I will have to think about another profession because I will be losing my leg soon. I love playing cricket and football.  I can’t even play those games anymore, right? Hmm that’s alright then, I’ll probably play some indoor games. Anyway, I can still draw and paint like before. ” – Prajwal said smiling.

One would wonder from where Prajwal gets such positivity and strong will power. You will get the answer when you meet his mother. Shobha is raising her only son single-handedly with sheer determination. Her husband left her and their son 8 years ago for a second marriage. When he was told about Prajwal’s medical condition, he even stopped communicating with them over the phone.


“Prajwal is all I have. My husband abandoned us a few years back. I never cared much about it. I had my son and that was enough for me. I have raised my son well and have provided him good education. I never thought that God would also abandon me my giving such deadly disease to my son and plan to take him away from me.” – says Shobha bursting with tears.

Shobha works as a security guard in a private firm. She earns a modest income of about Rs 11,000 per month. She has already spent about 3-4 lakhs for her son’s treatment so far through the help of her relatives and friends. She doesn’t have any means to arrange for more funds for Prajwal’s surgery and further medical care.

Prajwal needs to undergo surgery where his right leg would be amputated in order to restrain the cancer cells from spreading to the other parts of the body which could otherwise be fatal. Further, he needs to undergo a few more cycles of chemotherapy to recover completely.

Shobha needs your help to raise an amount of 10 Lakh Rupees to save her only son. You are her only hope and she doesn't have much time to raise the funds.