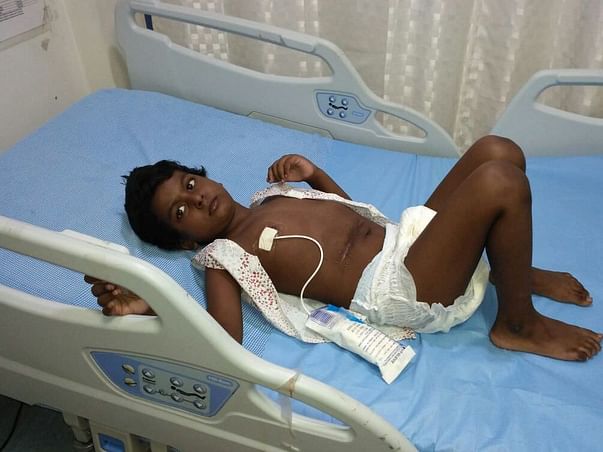 Share
For the last few months, 4-year-old Pradyuman has been struggling with a severe stomach disease called Midgut Volvulus.

What is Midgut Volvulus?
Midgut volvulus is a condition in which the intestine has become twisted and it severely affects the bowel movements. Symptoms are severe stomach cramps and pain, vomiting and blood in the stools. If not treated at the earliest, it can become very critical.

A bad stomach ache that was a sign of much worse to come
"It was Sunday night and Pradyuman had just finished his meal. He started complaining of a terrible stomach pain. He was crying and it was followed by a lot of vomiting and diarrhoea. His body looked like he was having seizures and we took him to a hospital when even painkillers did not ease his condition."
Pradyuman has been suffering and his parents cannot see their son in this state any further. He has been instantly advised to undergo treatment and management of the condition. He needs to undergo a nutritional form of treatment for the next 6 months and the cost of that amounts to around 120000 INR per month.
Pradyuman used to ask for food all the time at first, but now he has stopped.
Unfortunately, Pradyuman's parents do not have the funds to pay for his treatment. They have managed to pay for 45 days worth of treatment but have now exhausted their funds. They are worried that without the funds they would not be able to save their son.Pradyuman has already undergone three surgeries and he is only 4-years-old
"We have started to hate eating. Every meal is a cruel reminder of how much our son is suffering and how close he is to death. We are holding on to the belief that he will heal and get better. I only need to make sure he gets his nutritional fluids for the next 6 months – so his intestines can recover."
How Can You Help
Your contribution can save Pradyuman's life and give him the treatment he deserves.