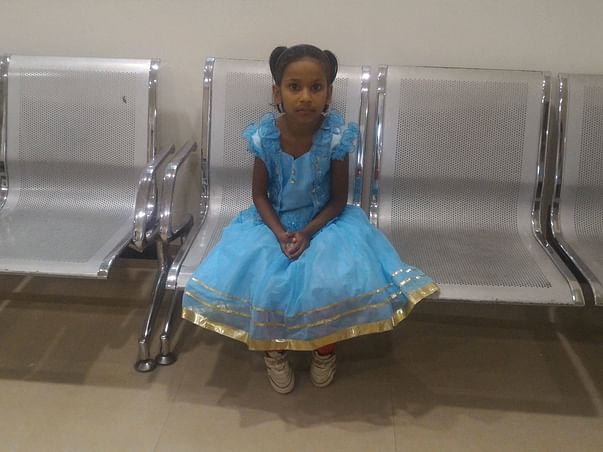 Share
Pooja has been diagnosed with CHD, Supracardiac TAPVC, Large OS- ASD with right to left normal Biventricular Function. She complained of stomach pain and Breathing difficulties since 2 years and was suspected with cardiac problem when a health check camp was organised in her school. Hence she was taken to Jaideva Hospital where she was confirmed to have cardiac problem and was advised immediate surgery. Due to Financial problem her parents could not afford the treatment cost and hence she was on Medical management. But yet she complained of breathing problem and hence as her father Mr. Harish worked in an NGO and he children were brought to MHB for check up he requested the Health Care taker and the Director of the NGO to help his child also. Hence she was brought to Manipal Hospital and consulted Dr. Devananda who advised Rerouting of Supracardiac TAPVC surgery at the earliest to prevent Irreversible damage to the vital organs of her body. The date for her surgery has been fixed on 17.10.16

Pooja’s father Mr. Harish is a driver in a NGO and mother Mrs. Radha is a housewife.  They have four children of which Pooja is the third one. Harish earns Rs. 8000/- per month and as they live in a rented house they pay Rs. 4000/- rent per month and do their living in the Rs. 4000 only. As they are 5 members in the family they struggle to lead a normal life and due to Pooja’s health they have to spend on the medications also.

The approximate cost of the surgery is Rs.3,16,500 and could arrange for Rs. 50000 only by taking loan from the NGO where he works. The doctor has advised surgery at the earliest as it is delayed by almost 4 years.