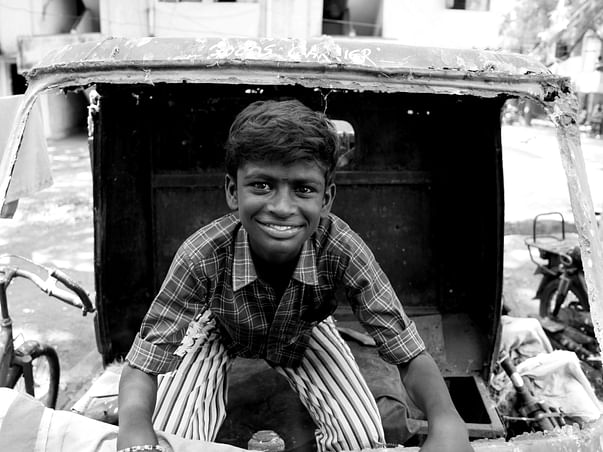 Share
When people talk about manual scavenging, it’s generally a topic that does not invite too much debate. Blame it on the smell or apparent grime. But what about the children of manual scavengers? Shedding light on the life they lead, the work they do and the discrimination they face is what photographer Palani Kumar conveys through his lens.
This 27-year-old, Madurai-born photographer discovered that his love for children was intense when he started working with a group of youngsters. He eventually went on to teach children in government schools all over TN, after finishing his engineering degree from Adhiyamaan College of Engineering, Hosur, which he only joined to please his mother, a fishmonger who wanted her son to be an engineer, though he had other ideas.
Palani soon noticed the difference in lifestyle between government and private school kids. That is when he observed that kids from government schools and most of their parents are forced to be manual scavengers for a living. It was either that or because of the community they belong to.
He purchased a camera on a whim in 2013, but the lens soon became a defining part of his life.Palanikumar began traveling on his own, in search of the ‘invisible children’. He has traveled around 25 districts, spotted many manual scavengers and found that their children are also falling into the same trap. He narrates an incident that still makes his gut wrench.
“While traveling across the State, I captured a manual scavenger cleaning the feces and what not with his bare hands. His daughter witnessed this and she looked at his hands, confused. Sadly, when the children grow up, they get into manual scavenging as well. It’s a vicious cycle and it needs to stop!” shares Palani

He shot grim conditions of these workers and their children and he set a solo exhibition 'Naanum Oru Kuzhandai' (I'm a child too) at Chennai.This exhibition is his way of urging the society to prevent these children from falling into the trap.His journey will be bringing these kids out of manual scavenging through art.

But traveling around and taking pictures is not a ‘light on the pockets’. He is presently taking photos with a borrowed camera as and when it could be given to him by a friend. He wants to buy a camera which will also help Palani to make his life sustainable by doing one or two commercial work to feed himself.

Your contributions will help Palani to use his photography skill for the social cause and help him to continue his journey.