Help NUBRA valley kids gain holistic education | Milaap
Milaap will not charge any fee on your donation to this campaign. 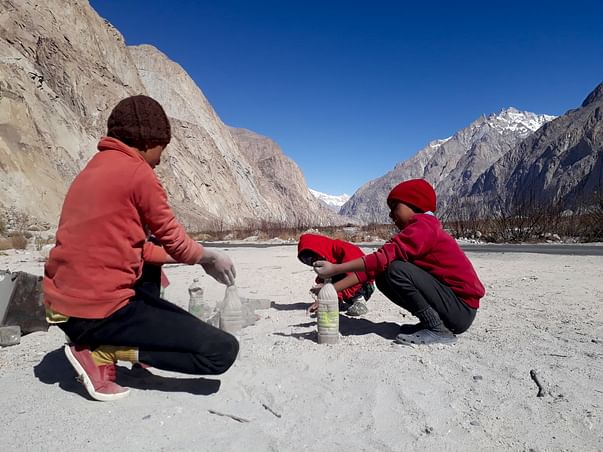 The Background
This is a humble request for your help in keeping the serenity of a small hamlet, Aranoo that forms a part of the everlasting splendor of Nubra Valley, Ladakh.
The mere thought of Ladakh captivates our minds with sweeping beauty. The uniformity of uneven landscape under charming blue sky in perfect alignment with snow crested peaks and perennial steams are indeed a surreal picture. On the other end of Ladakh’s scenic range lies its rich indigenous culture of Indo-Tibetans who are fighting an everyday battle between adaptation of the new age brought about by thousands of tourists and settlers and the olden-times glory of rituals.
Sandwiched in this dilemma are the children and youth of Aranoo (Nubra Valley) and its adjoining villages namely Khemi, Tongstet, Dongnung, Henachey, Taksha, Sasoma, Hargam, Aaye, Kubet and Murgi which are at constant cultural shift slowly diluting their identity. This is where we seek for your support.

The Gist
Tsetan, is a local enthusiastic fellow residing in Aranoo who has dedicated his critical years of life to the sustainable development of his region. Although he started this mission on his own, the arena of a village progress is far too huge for him to carry forward. With his daily interactions with the children from across several neighbouring villages, he realised that the children need to have a holistic system of education and learning where they have the option of knowing their own culture and tradition as much as the modern means of civilisation.
Culture! Change! Childhood! Nurturing! We all know the fundamental connection of these factors. We may not often sit to think its importance in terms of safeguarding the rich history this land holds. But do we care about it? Like-minded people like you and us definitely do.
We are on an unguarded quest for bringing the various elements of expertise of various volunteers and also of Tsetan, so that when our subsequent generations step on the beautiful land of Nubra Valley, its “humane touch” remains tangible through the young minds.

About the Campaigner
Tsetan Dorjay, the chief organizer of the campaign is 21 years old, who has been working towards sustainable development and wildlife conservation in the villages of Nubra and Leh for many years. A former student of SECMOL, run the world-renowned Environmentalist, Mr. Sonam Wangchuk and a member of ICE STUPA TEAM, Tsetan has been working tirelessly in various remote villages of his region. He has also been a part of researches conducted by National Centre for Biological Sciences in the Leh region and is currently working with Snow Leopard Conservancy India Trust.

The Issue
Despite having a government primary and middle school in the region, Tsetan being an alumnus of the school feels that the children are not provided with creative and holistic learning. Associative with this, lays the major issue of skills' development negligence. Being so remote, the children do not have access to any of the modern means of accumulation of knowledge and their bright minds are wasted in the literal cubical.
The lack of awareness has slowly entered into the culture of the inhabitants where they are letting loose of their cultural patterns. Cuisines, attire, handicrafts and above all the innate urge of ecologically balanced existence are eroding away. Aranoo is just one of the many villages in Ladakh that is facing similar paradigm shifts.

The plan
Tsetan has sketched out a schedule program of accumulating 140 children and young adults from Aranoo and bordering villages.  The lot will be categorized into two groups. One between  8 years-13 years where they will be given day schooling and a variety of activities driven by their own desires will be imparted. The other group will be between 14 years – 21 years. These members will be given a form of boarding school where they will get to stay with us and develop practical experiences in terms of learning. These members will be given tours all around the villages to get an idea of their own origin and culture.
Tsetan will host volunteers from different parts of India who will teach the kids a variety of skills such as photography, theatre, tailoring, health and hygiene, literature, waste management and segregation, sustainable menstruation and so on. Their training will be meticulously and personally given by skilled volunteers who have been working with similar individual and group projects for many years now.

How do you help?
The scale at which we are planning this project is high. The survival itself is extremely difficult because we will initiate it in the month of January, 2019, when the weather is extremely harsh. Because there will be less economic and life chores in that particular month we are driving against our personal acclimatised habitation. As we venture into this new world of young minds and extremities we are extending our hands to anyone who wishes to contribute to this mission.
For further clarity, here is an estimated expenditure table that will help you decide the credibility of our cause:

Our appreciation:
We will forever remain grateful for any amount of donation you will be putting forward. You will always be kept in the loop of our activities as frequently as possible via mail or any other mode viable. Foremost you will be etched in this effort of uplifting the lives of many children and youth who do not even come in the mainstream of concerns of many. You will be not just a provider of funds but a nurturer of hopes!

Thank you all so much!

With everyone's kind support, we were able to raise INR 1,00,000 online as well offline. The amount is way too less than the required amount. But this won't stop us from organizing the workshop.

The preparations for the workshop are in full swing and we have volunteers from Ladakh, Delhi and Mangalore with us. Due to lack of sufficient funds, the workshop will be organised only for the kids who in the age group 14-21 years from the village Aranoo, Khemi, Tongstet and Dongnung. Around 30 kids from these villages will join us for a 7-day workshop.

Scan & donate with any app
check_circle_outline Download payment receipt
Report fundraiser
See how thousands are crowdfunding for their causes on Milaap
Rs.23,450 raised

Sending you this very small amount of money but lots of good wishes. Please let me know if I can help otherwise :) good luck Tsetan!

Sending you this very small amount of money but lots of good wishes. Please let me know if I can help otherwise :) good luck Tsetan!

A
You are sending a message to
Tsetan
Go back 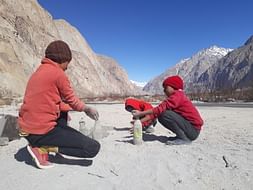