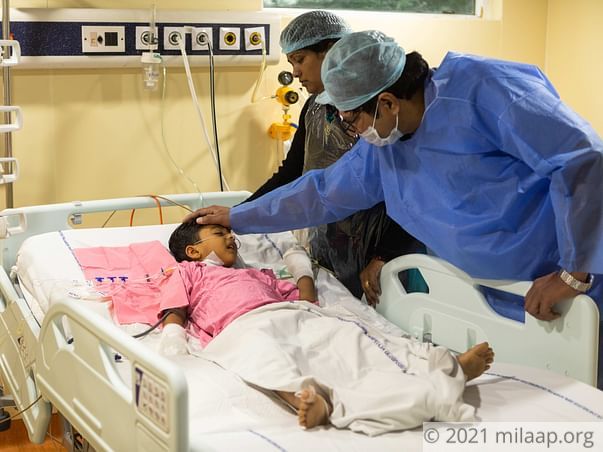 Share
Nadeem didn’t even get time to change his uniform after he got back from work 3 days ago. He had to carry his extremely critical, crying 4-year-old son, Noman in an ambulance from Nagpur to Hyderabad. Noman's liver has completely failed and he is running out of time. In just a week, Noman has become so critical that his parents didn’t get enough time to think or prepare themselves for this situation. Noman needs to undergo an urgent liver transplant in a few hours. A seemingly healthy child is now fighting for his life in the ICU.


“Everything happened so fast. We haven't been able to absorb the fact that our son might not make it. A week ago, my son had a fever and started throwing up. When we took him to the hospital, the doctor told us that he probably has a viral fever. The doctor gave him antibiotics. But I became a little worried when the next day too he was throwing up and his eyes started turning yellow. My son who was full of life was slowly being taken down by his fatal disease.” - Nazia, Noman’s mother.

After Noman’s eyes became yellow, Nazia and Nadeem took him to another doctor. After several tests, they found that his bilirubin was quite high and he had Hepatitis A. The doctors knew that things were out of control and asked the parents to take Noman to Hyderabad immediately. In the ambulance, Noman kept crying in pain. He had to be put on sedatives. The 500 km journey from Nagpur to Hyderabad was the worst journey of their lives.

When they finally reached Hyderabad, the doctors told the parents that Noman’s liver is completely damaged and he has very little time left. He needed an urgent transplant. For the past 3 days, Noman has remained unconscious. Without the sedation, his whole body trembles in pain. Whenever he wakes up, he keeps asking for his ‘Ammi’.


“We have exhausted all our fixed deposits. We had saved this money for our children’s future. But if my son doesn’t survive, how will he have a future. Although my husband had a decent income to sustain our needs, spending such a huge amount of money in such a short period was beyond our means. Everything happened so fast that we didn’t even get time to let our relatives know. We are in such a ruckus and getting out of it seems almost impossible. All we want is to save our son.”

After spending Rs 10 lakhs in 7 days, the parents have nothing left to save their son’s life

Nazia is donating a part of her liver to her son. As Noman lies in the ICU and Nazia has been taken inside the OT, Nadeem stands outside and prays that he doesn’t lose any of them in the process. The parents have tried to be very strong. All they know is that they had to save their child. Their whole world has turned upside down in just a couple of days.

Nadeem worked in a private company and had a decent income. But after spending Rs 10 lakhs in just 7 days, he can’t find a way to spend Rs 25 lakhs for his son’s ongoing transplant. He needs urgent help to save his little son.

Nazia and Nadeem could never even get a hint that their son’s liver is completely damaged. After he was diagnosed with chronic liver disease, in just 7 days, the parents have spent lakhs of rupees. Noman needs a liver transplant in a few hours. Nadeem has spent all his savings so far and needs help to save his son now.

Your support will save this 4-year-old