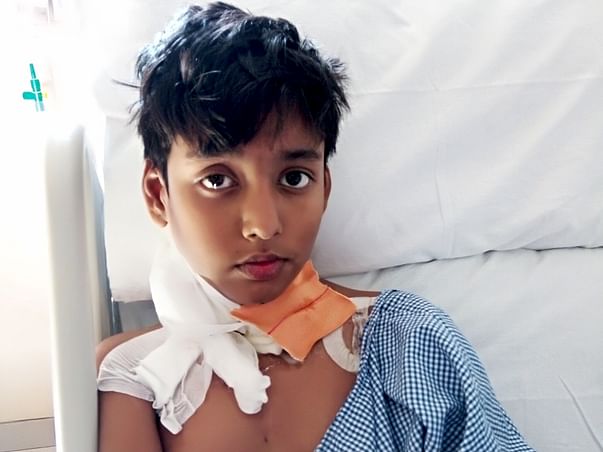 Nishank is a 11-year-old suffering from a cancer in his neck for the last two years. As the tumour grows, it will compress structures in his neck – like his windpipe, voice-box, spine and even the lower brain. Nishank needs treatment to reduce it.
Nishank's parents Teekaram and Usha have exhausted all their funds on his treatment in the last two years. They need help saving their son Nishank.

Nishank cannot eat or breathe properly because of his tumour

The last two years have been hard for this family. Usha cannot think of how Nishank used to be, without feeling a sharp stab of pain. His energy, his confidence and even his voice have changed. And the doctors say that things will never go back to the way it was.
Usha and Nishank at the hospital
It started when Nishank became unable to hold his head straight – two years back. It took three months, before a lump was spotted in his neck – from the spinal discs. After radiation treatment and a surgery – it looked like the fight was won. Unfortunately, the cancer came back in a few months – more aggressive than before.
The tumour became so big that it started blocking Nishank's breathing. He couldn't breathe or even eat properly. He needed immediate help or he would choke on the tumour. Nishank underwent more radiation and then a surgery. But only 50% of his tumour could be removed. The ordeal is not yet over.
“Because the tumour is in a very critical position – between the spine and the brain. It cannot be surgically removed because it could cause permanent damage. We can only give treatment that will shrink the size of the tumour, and make the condition manageable for Nishank,” explains Usha.

The last two years have been a terrible time for the family. Usha and Teekaram have watched their child suffer from a condition that is slowly taking the life out of him. They are doing their best to keep up Nishank's spirits – even occasionally sending him to school – where he can play with his friends and forget about his treatment.
Nishank's cancer is threatening to suffocate his windpipe and block his foodpipe. At this stage, it is even starting to push against Nishank's brain stem. He needs treatment that will kill the cancerous cells and reduce the size of the tumour.

Teekaram has sold all his property and taken loans to fund Nishank's treatment so far. They have spent close to 30 lakhs till now. They have exhausted all their sources and need some support for the next crucial stage of treatment. Stopping treatment will put his life in danger.
With our support, Nishank can be saved from this terrible condition and pain.
Estimation letter 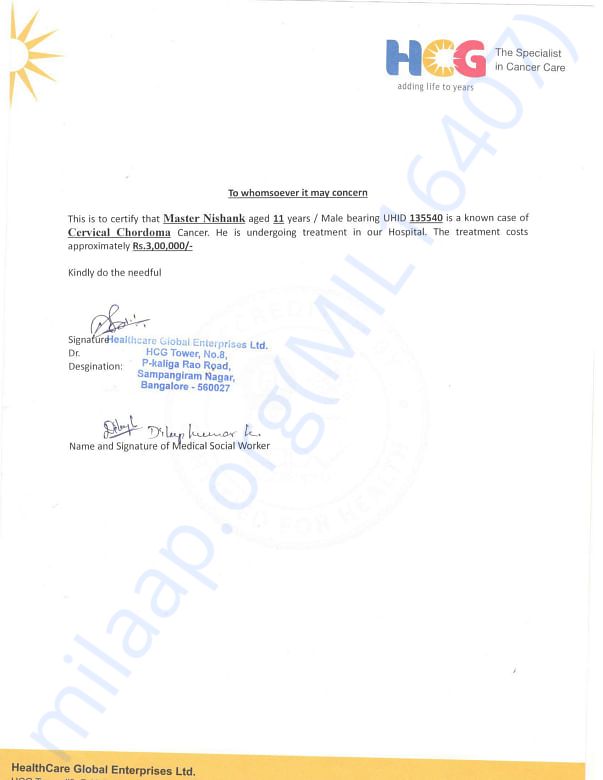 Report fundraiser
See how thousands are crowdfunding for their causes on Milaap
Rs.79,309 raised 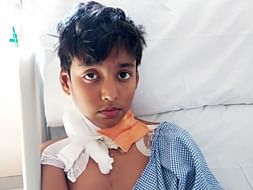