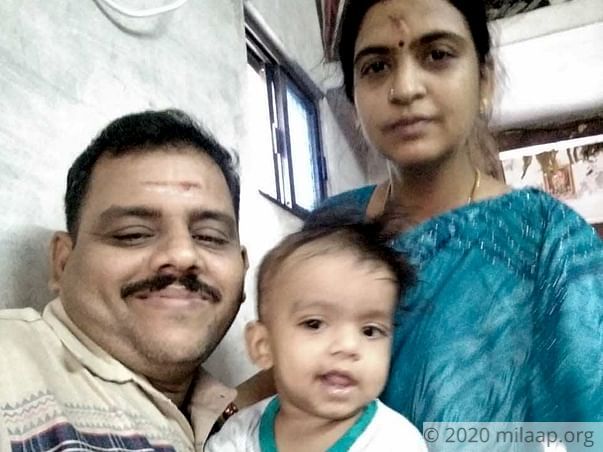 “My wife, Kalyani always talked about visiting Chennai to meet relatives. I would put it off because I never had enough money to pay for even our bus tickets. But as fate would have it, we were forced to come here to save our baby boy. As I cannot afford the hospital room expenses, we stay in a small room in our relative’s house in Chennai. We have only two pairs of clothes and eat whatever they give us as we know they are poor like us. My son needs chemotherapy for a year to survive, costing Rs 12 lakhs. But in this condition, I cannot keep his treatment going for a few days, let alone a year. Without it, he won't survive .”-Muthukannan, father of 9-month-old Muthuskandaraja.

Muthukannan, a shopkeeper in a small spare parts shop in Thanjavur, earned very less and took care of the needs of his three children and wife with great difficulty. He is so poor that his elder children – 14-year-old Muthukamleswari and 8-year-old Muthukanmani – were able to go to a good school only because a relative agreed to pay their fees regularly. He was already struggling to make ends meet when his youngest child, Baby Muthuskandaraja, was diagnosed with brain tumor. He had to relocate immediately to Chennai with his wife and sick child to start his treatment, using up every last paisa he had. Now the family is left empty-handed and completely dependent on their relatives for survival. They are unable to continue their baby’s chemotherapy, without which their baby will not live for more than a few months.

Muthukannan used to wake up seeing his baby’s happy face every day, but his cries gave him sleepless nights soon

Born 8 years after their second child, Muthukanmani, Baby Muthuskandaraja was the apple of his parents’ eyes. He was an active baby who would wake his father in the morning by planting sloppy kisses on his face. His babbles and giggles gave Muthukannan the energy to successfully complete 10-hour working shifts every day. Life was hard, but he made sure to keep his family happy on his meager income. But one day, two months back, life as he knew it, changed drastically.

“It all began when my baby boy started vomiting everything he would eat. My wife and I were taken aback when we learnt that it was because of a tumor in his brain. Little by little, day after day, the tumor started weakening him. He was a small baby who didn’t deserve this pain, and we knew we had to save him before things got out of hand. That’s when we decided to go to Chennai for better treatment, despite being short on money.”-Muthukannan.

Despite undergoing an emergency surgery, this poor baby still faces the prospect of death

Soon after Baby Muthuskandaraja was admitted to a good hospital in Chennai, the doctors warned his parents that the tumor needed to be surgically removed as it was building up pressure inside his brain. Muthukannan had no choice but to borrow money to make sure that his son underwent the emergency surgery. He believed that the surgery would be enough to make his baby boy healthy again in no time. But when this desolate father came to know that additional chemotherapy for a year was needed for his son’s survival, his heart sank.

“After a stressful couple of months, my wife and I were preparing to leave for our hometown with a fully-cured baby. But when we were told that the tumor could grow back any time without chemotherapy, we wondered if this ordeal would ever end. Our baby has gone through a lot of suffering, but he has still held on despite it all. If anything were to happen to him now just because we couldn’t afford to keep him in hospital, I would never forgive myself.”-Muthukannan.

Jobless for more than 2 months now, this desperate father is struggling to save his baby before it is too late

Muthukannan used to earn a meagre Rs 7500 in a month before leaving his job temporarily to come to Chennai to save his baby. But now it has been more than 2 months since he has been able to go to work, and has exhausted all the money that he had borrowed from private moneylenders for his son’s emergency surgery. He does not have a single rupee left and cannot pay for Baby Muthuskandaraja’s chemotherapy. He cannot continue to borrow more money at high interest rates, because he knows he will never be able to pay even one instalment back, and never be able to go back to his hometown in that case. His two elder daughters, Muthukamaleswari and Muthukanmani, who are in the care of their maternal grandparents back in Thanjavur, are begging to see their baby brother again. But Muthukannan is worried that it may never happen.


Muthukamleswari and Muthukanmani hope to see their baby brother healthy and alive, but their father cannot save him

“My relatives are being kind in continuing to offer us food and shelter. They are poor themselves and yet are doing everything in their capacity to help us. Because of them, my baby can at least lie down on a decent sleeping mat. But without chemotherapy, our baby will not survive for long.”-Muthukannan

Baby Muthuskandaraja is suffering from a brain tumour and needs prolonged chemotherapy for a year to survive. His father, a shopkeeper who is jobless now, does not have the means to save him and is completely dependent on relatives to provide for his family now. This baby can go back to being healthy if you choose to help his poor father.

UPI: givetomuthukkannan@yesbankltd (Copy to clipboard)
Or
Click here to read the instructions before you make a bank transfer. 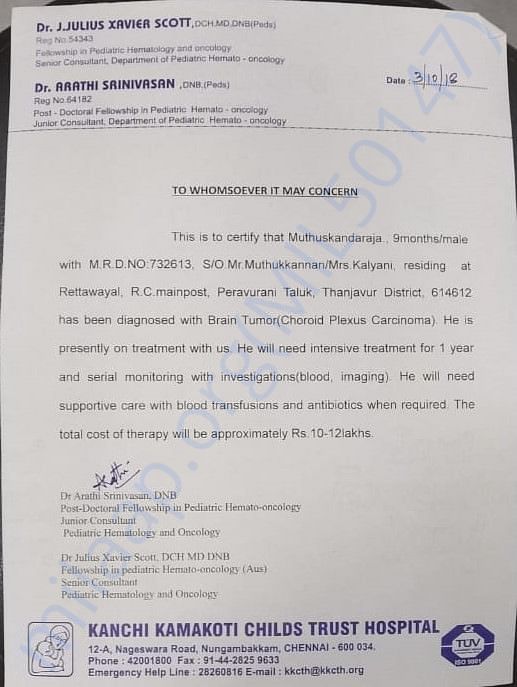 UPI: givetomuthukkannan@yesbankltd (Copy to clipboard)
Or
Click here to read the instructions before you make a bank transfer.

We would like to inform you that Muthuskandaraja is fine now and is at home. He has successfully underwent 12 chemotherapy sessions and now we have to visit the doctors for follow ups.

Thank you all for your support. Here is a quick update on Muthuskandaraja's health:

He has completed his 8th cycle chemotherapy and he is good and well. Please keep him in your prayers!

It's rejoicing to receive so much support and love for my son.

Muthuskandaraja is presently at home. He has completed 2 cycles of chemotherapy and will be admitted for the third cycle this week. His platelet count reports were normal. Refusing to eat and vomiting medicines are side effects of chemotherapy are are normal as per the doctor.

Kindly share the campaign and pray for his health.

Report fundraiser
See how thousands are crowdfunding for their causes on Milaap
Rs.1,028,428 raised

May God bless him!

May God bless him! 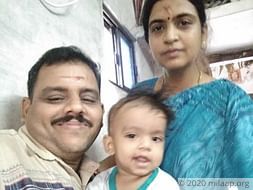