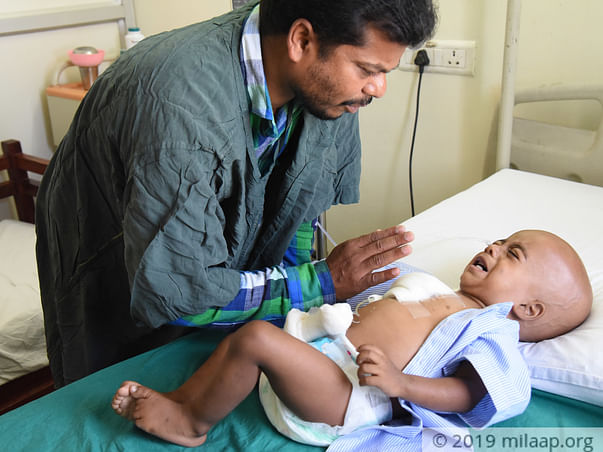 “Every time we went to the clinic, he would just get cold medicines. Turns out that it was never a cold. All this wasted time just put him in a critical condition.” - Sithiek

Sithiek, Sulthan Banu and their 1-year-old son, Aatham, live in Kodaikanal. For months, Aatham had the sniffles. Sithiek assumed it was from the cold weather, it was affecting a lot of children in the neighbourhood too. Although he was taking syrup for weeks at a time, it was not effective. One day in December, as Sithiek visited the clinic again for consultation, the doctor asked him to rush Aatham to the ICU.

When his cold worsened, it was a sign that cancer had advanced

“They said he will die if we do not take him to a hospital in Madurai immediately. I kept praying the whole ride for my son to stay alive until we reach.” - Sithiek

In December, Aatham started wheezing. He could not breathe. At the local hospital, Aatham’s blood tests showed abnormalities. Sithiek was shocked when the doctor could not give a diagnosis. Instead, he had to rush Aatham to Madurai in the middle of the night. During the 3 hour ride, Aatham’s condition kept worsening. He was struggling to stay conscious. He was barely alive when they reached the hospital. Here, Aatham was diagnosed with blood cancer.

With a port connected to his chest, every movement this baby makes is painful

“There was no time to waste. We had to start chemotherapy immediately. They inserted a port in his chest for chemo. He screamed for hours. Even now he cries out of pain whenever he moves. He has been refusing to feed. If I force him, he vomits. He has lost so much weight. I don’t even recognize him anymore.” – Sulthan Banu

Aatham’s blood cancer is so advanced that it has compromised his immunity – it is very easy for the little one to catch infections now. Nobody is allowed into the sterile cancer ward with him except his mother, who must wear a face mask and maintain hygiene all day long.

Sithiek has not held his son in two months now. He had to leave his job as a salesman and move to Madurai for his son’s treatment. He sleeps on the hospital floor and eats free meals at the hospital and he has exhausted all the money he borrowed to start the treatment. Time is running out. Aatham needs a bone marrow transplant soon.


With your contribution, Sithiek can save his 1-year-old son’s life.