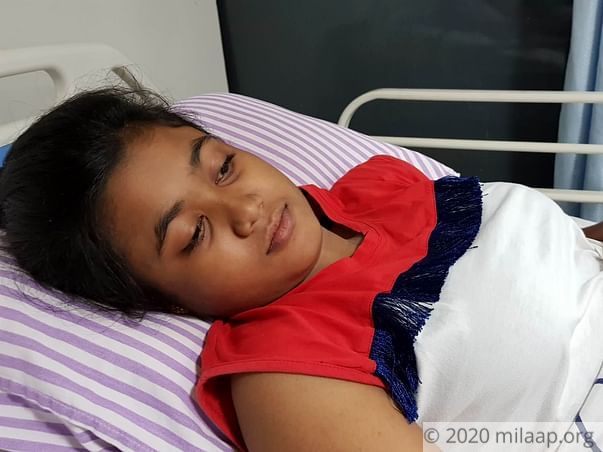 “She listened to me quietly when I said she has a tumour in her left leg. I told her she will be fine soon. The only thing she asked me after listening to all this was if she could return back to dancing. I couldn’t hold back my tears. I hugged her and promised that she would never have to stop dancing,” - Haridas, father.

Calcium tablets were not what Neha needed

It was the exam season and Neha was studying hard to fare well. She used to often stay up late to study. On one such night, when Tanushree got up to check on her, Neha said she had a bad ache in her left leg.

“We thought it was stress. The doctor we took her to gave her calcium tablets. ‘Make her sit in the sun’ - he said - ‘that and these tablets will make her fine’. I started giving her two glasses of milk instead of one,” - Tanushree,mother.

Nothing helped. In 3 days time, Tanushree noticed a swelling in her leg - she could hardly walk. Visits to the doctor and tests revealed that it was not calcium deficiency after all. Their daughter had a growing tumour in her left leg.

Neha has had one round of chemotherapy - she needs 3 more before her surgery. She is responding well to the treatment but it needs to be continued. Otherwise, the cancer would spread and the 13-year-old will lose her leg.

Unaware of the consequences, Neha spends her days in her room - reading books or sometimes painting. It’s been almost 4 months since she has gone to school or met her friends. She misses all of that. But she believes her parents. She thinks the ‘vaccinations’ will cure her soon. She has lost her appetite and sometimes her pain doesn’t allow her to sleep but Neha is still positive. Her parents look at her innocent face and pray for their daughter’s recovery.

My debts are increasing and so are the hospital bills - how can I save my daughter?

The only child of Tanushree and Haridas, Neha means the world to them. Not a single day has passed when Haridas hasn’t gone out to seek help for his daughter. He has already borrowed from everyone he knew - that’s how he has been able to pay 1 lakh thus far.


“For a person who makes only a few thousand in a month, 1 lakh is huge amount. But the doctors have told me that Neha’s treatment would cost me around 8 lakhs. The only way I can arrange for so much is if you help me,” - Haridas.

You are the only hope for these parents who are struggling to save their only child. Even a small contribution from your side will make a difference 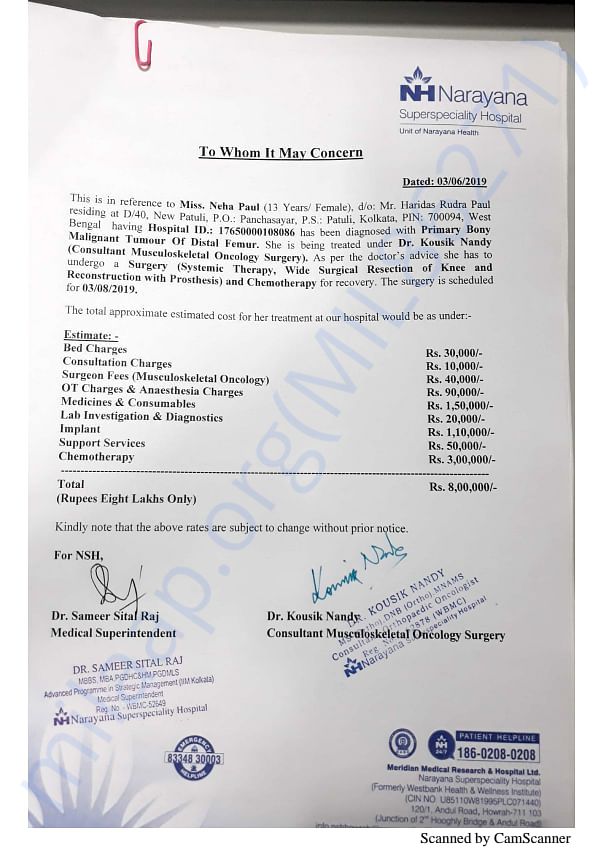 Neha had come to the hospital to see the consultant regarding her wound and the doctors are happy to see her progress. She also met with the physiotherapist for her limb movements.

Neha underwent the surgery and she is now undergoing chemotherapy.

Neha is going for the chemotherapy and mid-September she will be undergoing the surgery.

Report fundraiser
See how thousands are crowdfunding for their causes on Milaap
Rs.766,488 raised

Donated to this campaign via Paytm? Click here if you can’t find your donation listed below.
MM
M donated Rs.500
A
Anonymous donated Rs.500

Donated to this campaign via Paytm? Click here if you can’t find your donation listed below.
MM
M donated Rs.500
A
Anonymous donated Rs.500 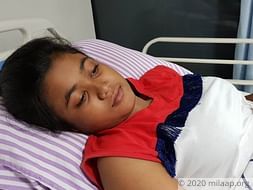