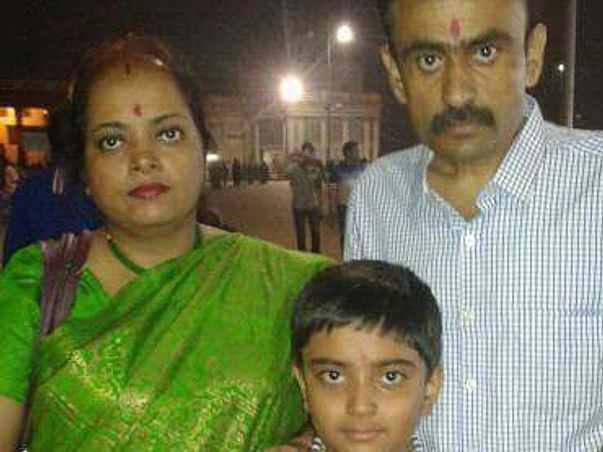 Hi,
This is indrani Chatterjee wife of Mr.Koushik Chatterjee &Mother of Emon Chatterjee.
I met koushik in a relative's house n fall in love with each other. We spent few wonderfull years together with the blessings like my child Emon who is 7yr old now. The wheel of fortune suddenly started rolling reverse.
Koushik was working in Safed Detergent Powder & from 2015 he was frequently feeling bad with irregular bowel movement, vomiting etc which was coupled with severe spondylisis. He was loosening weight due to spondylisis the posturing was restricted. At the beginning of the 2016 its was diagnosed as ankylosing spondylitis which was a signal for Crohn's Disease. As per the suggestion of Dr.Pinaki Roy a USG Colonoscopy &all relevent blood test was done which finally confirmed Crohn's Disease. Crohn's Disease is a auto-immuno disease resulting ankylosing spondylitis, weight loss, fistula n almost incurable in india. The entire treatment is so expensive that absolutely there was no way but to emptied all the savings. Including doctors fee diagnostics process medicine causes 1000Rs average per day. Koushik never expected such a thunderbolt at d very beginning of family life. So even after help from few friends n relative we had to depend on Govt hospitals.
He First got admitted in NRS when suddenly a lump formed at d right back side containing pus cell. As the lump increases Dr.Pinaki Roy suggsted to take an appointment with Dr Rajib Sarkar , MD.DM (Gastrointestinal diseases) who finally confirmed there is no way but to use Anti-TNF Drugs which is costs nearly 150000rs. Or can go for operation later after digital scan he declared the fistula formed in lower intestine & being complicated its better not be operated. As we didnot had sufficient cash we had to wait for Anti-TNF Drug by govt hospital queue but the drug is yet to come from last 3months. With the help of relatives we finally went to CMC Vellore chennai. Dr.Ajeet singh MD gastroenterologist suggested for operation which costs almost 3 lakhs Rs. He is already admitted in surgery department under gastroenterology. Due to his weak health operation may delay for 4/5days his admission cost was even 30 thousand rs. I have sold all my ornaments. So He has resigned from job to collect all his Provident fund n gratuities. Now all your help is badly required to bring him back in life to turn d wheel of fortune again in proper direction where my son Emon can live a healthy life with his parents.