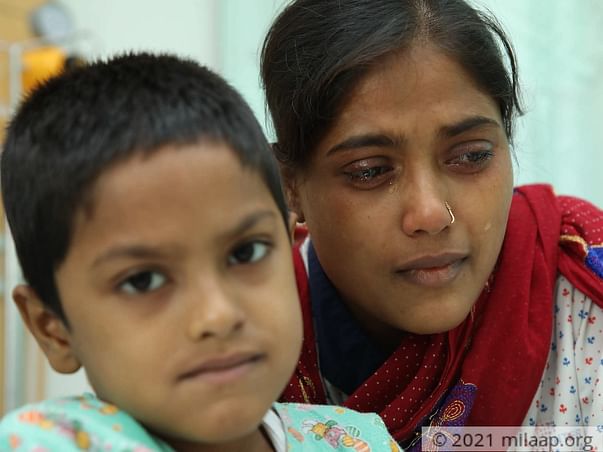 “Just hearing about cancer makes us feel terrified so imagine the pain my 7-year old son is going through. Khurshid has lost his childhood to this disease. He has already fought cancer once so why is Allah testing us again? Every day we are living on borrowed time, not knowing what would happen the very next moment.”- Khadija, Khurshid's mother

Khurshid is battling a relapse of Acute Lymphoblastic Leukemia, a severe form of blood cancer. This time his symptoms are more serious. His liver has enlarged in size and he bleeds from his gums quite often. The lumps on his body have visibly increased too. He was merely 3 years old when he won his fight against blood cancer successfully but this time the powerful antibiotics have weakened his immunity. He needs continued chemotherapy to be able to kill those cancer cells again.

On his birthday, he fainted before cutting his cake

Ali recalls the day last month when they were cutting Khurshid’s birthday cake and he complained of having blackouts. Soon after, he turned pale as if somebody had sucked the blood out of his body. They immediately rushed him to the hospital where his platelet counts turned out to be critically low, hinting at the possible onset of cancer again.

“Every day I thanked Allah for giving my son a new lease on life. I was never financially in a condition to celebrate his birthday but this year we saved enough for at least a cake for him. Before cutting it, he told us that everything is appearing black to him. Even before we could understand what he was trying to say he became unconscious.”- Ali, father

They are still repaying debts taken for his treatment years ago

Ali works as a daily wage labourer and to be able to afford Khurshid’s daily medicines he is forced to go to work daily. Last year, they gave their all for his treatment - from selling off Khadija’s wedding jewellery to the small piece of land they owned in the village. They spent 6 lakhs and till date they are still repaying their debts. Now, to think of arranging 10 lakhs again for Khurshid’s chemotherapy is making them extremely anxious.

Seeing no other way out, Khurshid’s mother had even started begging on the streets because she cannot imagine losing her only child. Their relatives have come forward to help but even they could support them only with a couple of thousands. Even if Ali works for the rest of his life now, he still can’t arrange a lump sum of 10 lakhs to continue Khurshid’s chemotherapy. But since it is a relapsed case, if they delay any further, Khurshid’s condition will keep aggravating, and they fear they might have to pay the price with his life.


Khurshid is a quiet and calm kid. He studies and hardly demands anything from his parents. Being in the hospital for months, he misses his school where he used to participate and win several racing competitions. Now he quietly takes his injections and medicines even when its harsh taste is unbearable for him. He knows that is the only way to recover now but his parents are unable to tell him the truth.

Can you please help Khurshid fight his blood cancer again?