"Cancer Is A Costly Disease. I Have No More Means To Save My Mother." | Milaap
Milaap will not charge any fee on your donation to this campaign.

"Cancer Is A Costly Disease. I Have No More Means To Save My Mother." 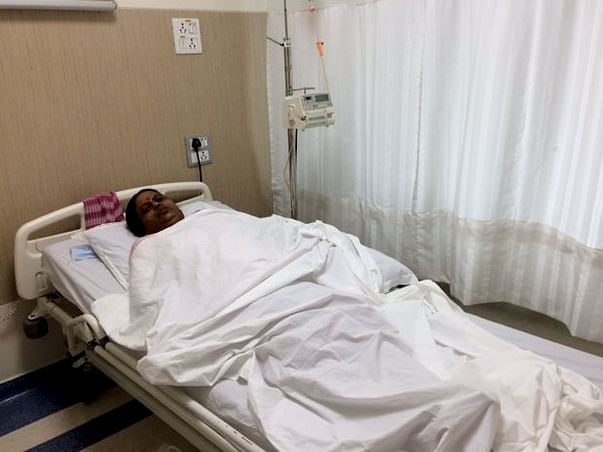 “My mother has always been my support. It is because of her that I could reach so far. I want one chance to give her some happiness. She must stay alive to see me reach places she had dreamed for me,”
Amarnath and his family hail from Sukur village in Burdwan district, West Bengal. His father being a farmer, it was with great difficulty that he completed his degree and got a job in Bangalore. His salary of a little over Rs. 17000 was a very big achievement, with his father’s deteriorating health and inability to work.  Unfortunately, his happiness was short-lived. Today, he is struggling to save his mother from Cancer. His once big salary now seems insignificant before what it takes to save his mother’s life.

His mother Kaberi had a benign tumour on her thigh 10 years ago.

10-years-ago, Kaberi had developed a tumour in her right thigh. This was removed by a surgery in Bangalore. Since the tumour was benign, the surgery was simple. Being very poor, the family was exempted from bearing the entire expenses.

The tumour has returned now, in a more dangerous form.
Kaberi started complaining of severe pain in her thigh in March 2017. Within days, she could not even move the leg due to pain and swelling. Upon consultation, doctors informed Amarnath that the tumour had returned, and had engulfed her thigh bone completely. It was now a Cancer.
“It was a malignant form. It had turned into cancer. They told me her bone had been corroded to a paper-like form. I could not even imagine the pain she was going through,” Amarnath is broken at even the thought of his mother’s pain.

Amarnath’s mother is in unimaginable pain.

Unable to even sit up due to the pain, Kaberi has now been bedridden for a while. Covered in bed-sores and unable to move, she only has Amarnath sitting by her day and night. The boy must helplessly watch his mother writhe in searing pain.
His father is a chronic asthma patient and needs almost Rs. 7000 per month for medication. With his stay in Bangalore, he never had enough money to opt for an insurance as well. Now, he has already sold his father’s farmland and received some support from his office, but the money hardly sufficed for initial tests and treatment.
"Cancer is a very expensive disease. I have exhausted every resource, and yet I am struggling to save my mother from it".

How you can help this son save his mother

“I need one chance to give her back at least a part of all that she gave me. She must stay alive. She is the only motivation for me to achieve my dreams. My mother is a simple woman, who dedicated her whole life to making mine better. Now, when it is my turn. I want to do more than just helplessly watch her suffer. Please help me save my mother!”
Amarnath still has a chance to save his mother. A surgery followed by chemotherapy is the only way he can do so. The procedure, costing over Rs. 5 Lakh is far more than what he can afford.
Our support through this campaign will help Amarnath save his mother. 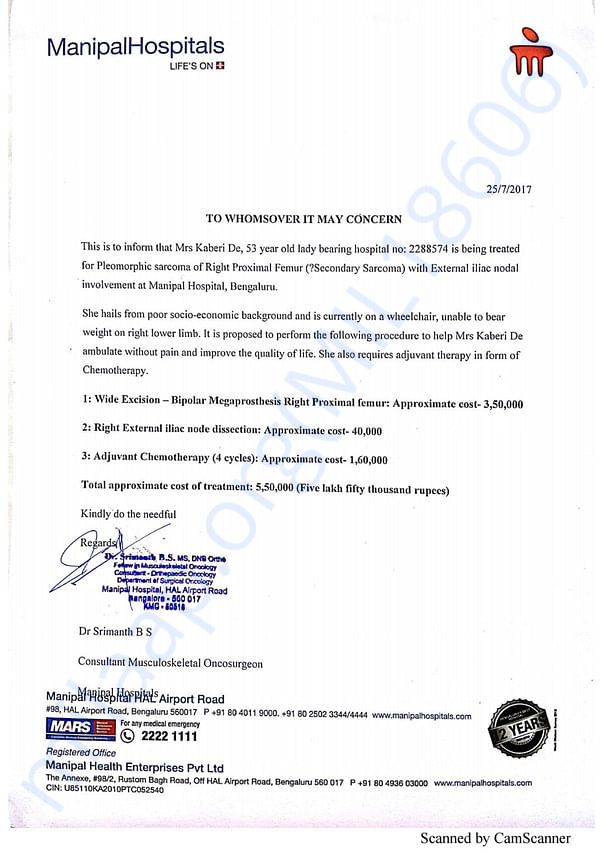 Here is a quick update on Kaberi.
Kaberi has recovered from her surgery and has started on with her Chemotherapy sessions.

Scan & donate with any app
check_circle_outline Download payment receipt
Report fundraiser
Know someone in need of funds for a medical emergency? Refer to us
Rs.395,790 raised 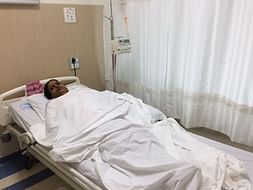 "Cancer Is A Costly Disease. I Have No More Means To Save My Mother."