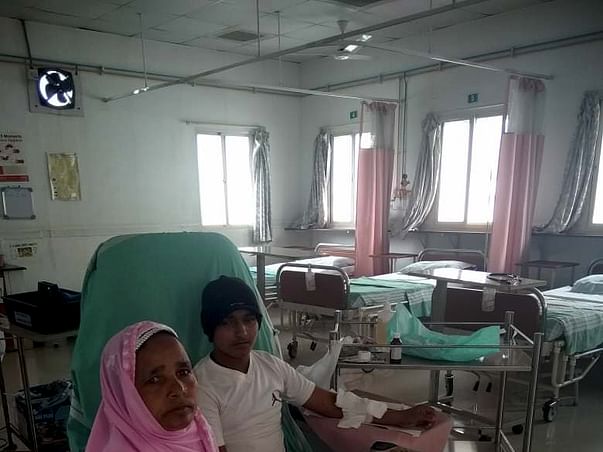 14-year-old Irfan is an active participant in athletics. When there was swelling in his leg, he believed it may have been a result of physical activity and did not pay heed to it. Now, his cancer has made him weak. Despite working hard, Irfan’s father made just enough to feed his wife and four children. He would go without food on really bad days to make sure his children are fed. But now he has nothing left to save Irfan.

14-year-old Irfan liked going to school and was a good student, loved by teachers and classmates alike. He had found an escape there – away from the poverty of his home. He had scored above 90% in his 8th grade and was about to join 9th grade in June this year when a swelling started developing on his left leg, above the knee.

“He didn’t even show us the swelling for days. He would always wear pants, so we couldn’t have noticed it by ourselves. He told us his leg hurts very badly one day and that’s when we saw it – the area above his knee was so swollen that it looked like it had fluid inside. We had not seen anything like this before.”-Zainulnissa, mother.

Irfan never fell ill often. Even when he got mild fever, he would not pay much attention to it and go to school as usual. Only this time, he grew very weak and winced in unbearable pain from the swelling in his leg. His poor parents, along with his elder brother, Shakeer, took him to many hospitals before tests confirmed that he had osteosarcoma or bone cancer. Shakeer had to explain the condition many times to his uneducated parents, before they got a fair idea of how deadly the condition is.

“We don’t know anybody who’s suffered from cancer before. Till now, we believed that only unhealthy people would get cancer. But our son was so active and he is so young. He is too young to have such a horrible disease! He was full of dreams, my boy. This is such a cruel fate.”-Shahid, with tears in his eyes.

Irfan yearns to go back to school, but his weakness does not even let him get up from bed

Cancer may have affected this gritty teenager’s body, but it could not dampen his spirit. Irfan knows that he is fighting cancer, but instead of getting scared and living in despair, he hopes to go back to school soon. He has lost his hair and has become very weak. Frequent vomiting and fever plagues him most of the time.

“He tells me that he wants to get up and dance – he loved dancing so much – but his body isn’t allowing it. He is too weak and famished, even though he doesn’t want to admit it. For our sake, he tells us that he is strong and will be fine in no time, but we know that it is just him trying to stay positive. My heart sinks when he lies about his pain, my poor child.”-Zainulnissa.

Shahid had to beg and borrow to fund Irfan’s treatment till now, but now he has completely run out of funds

Shahid works as a daily wage laborer in Bengaluru, and he is the sole breadwinner of a family of 6, including himself. He earns less than Rs 200 per day. The family lives in a small crammed two-room house, with limited means. Irfan’s cancer came as a big blow to not only their peace of mind but also financial capacity. Shahid borrowed a hefty sum from private moneylenders at high interest rates to start Irfan’s chemotherapy, but now he does not have enough money to continue it.

“I could not ask my relatives for help as they are fighting greater poverty and cannot help me. I am completely buried in debt now – I have not even paid back one installment yet. If I don’t get enough money in time, my son may even die. I need urgent help – I am that helpless.”-Shahid.

Even in this difficult period, all Irfan wants is a chance to go back to school and study well. He wants to get a good job someday and pull his family out of abject poverty. But that will not be possible until he gets prolonged chemotherapy to fight bone cancer. His father, a poor daily laborer, has done the best he could to arrange funds for his son’s treatment and is left with nothing now. His elder brother was even forced to leave college temporarily to take care of him. This family is going through hell and needs your help. 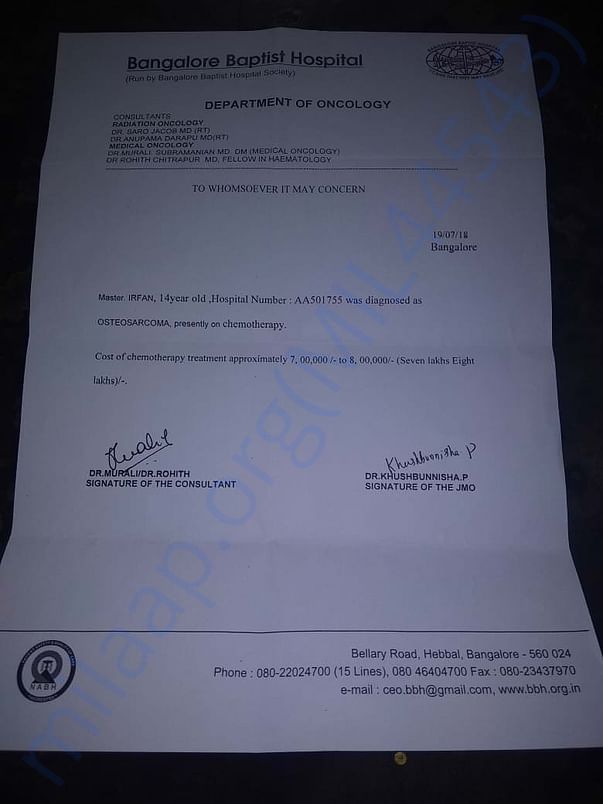 Scan & donate with any app
check_circle_outline Download payment receipt
Report fundraiser
Know someone in need of funds for a medical emergency? Refer to us
Rs.19,487 raised

Donated to this campaign via Bank transfer/QR Code? Click here if you can’t find your donation listed below.
s
sapar donated Rs.500

Donated to this campaign via Bank transfer/QR Code? Click here if you can’t find your donation listed below.
s
sapar donated Rs.500 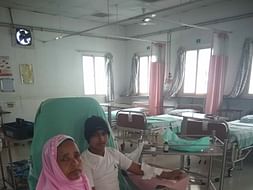