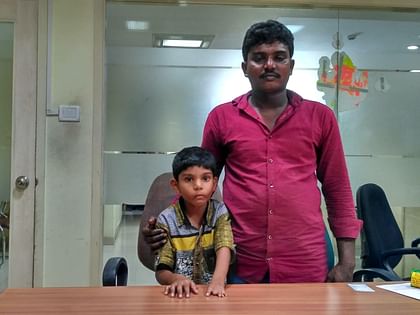 Share
Life has never been normal for 6-year-old Goutham who was born with a deformity in his hand. He was diagnosed with a disease called hypoplastic hand with webbing.

What is Hypoplastic Hand?
It is a deformity, many at times from birth itself where the hand is not fully formed.

From a young age itself, Goutham was taken to multiple hospitals where his parents were told that his hand would eventually grow back but it never did.

Now as Goutham grows older and has started going to school he is having a difficult time fitting in. He is unable to play properly with his friends, he tends to fall back in class because of this and is being constrained from doing things that a young, growing boy of his age would do.
Goutham struggles to lift things properly and feels constrained and frustrated all the time.

Finally, after taking him to multiple doctors, Goutham was brought to Ankura Hospital where he was advised to undergo a plastic surgery that would fix his deformity. The total cost of surgery amounts to approximately 65000 Rs.

Unfortunately, Goutham's father only earns a basic salary of 4000 Rs a month and is unable to afford the cost of the surgery. The surgery cannot take place without the funds.

Why should a young boy suffer and not lead the life he deserves because of a deformity that is no fault of his. Goutham deserves to fulfil his dreams just as much as any other child his age. His parents are willing to do whatever it takes to help their son.
Goutham with his family

How Can You Help
Goutham's parents need our help to fund his surgery. Your contribution can give Goutham the life he deserves.