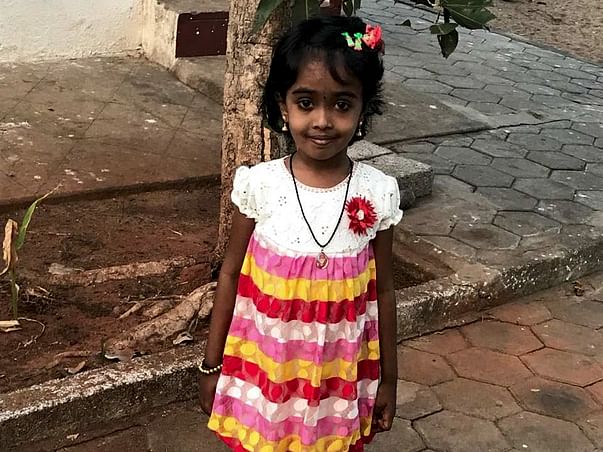 Dhanyashree is an active child, talkative & has very good eye for detail and a sharp memory. She is very affectionate and disciplined child. She was looking all normal when she was born. She looked all healthy and all her activities remained normal except for the fact that she was not putting enough weight as per her age. Our regular paediatrician also didn’t notice anything abnormal, most of the time he prescribed vitamin supplements and advised us not to worry too much as she is active and not falling sick often.

Time went on she completed her 2nd standard in Primary school, during the annual holidays we took her for a Rubella vaccination and post getting vaccinated, I again asked the doctor why she was not gaining weight , again Doctor prescribed normal vitamins, but this time I didn’t get satisfied and requested Doctor for a thorough check up.

Never thought that decision to request the Doctor for a thorough check up would turn our lives upside down. I heard the word her Haemoglobin(HB) levels are way too low (4.5) and  I froze and didn’t know what to say. Doctors suggested me to consult Haematology specialist Dr. Sarala Rajajee @ Mehta’s Hospital, Chetpet Chennai.

On March 29th 2017, we took her to Mehta’s hospital and as per Doctors advice few more blood test were conducted which revealed , she is suffering from Thalassemia - an inherited blood disorder in which the body makes an abnormal form of haemoglobin. Haemoglobin is the protein molecule in red blood cells that carries oxygen. The disorder results in excessive destruction of red blood cells, which leads to anemia. Her blood sample was sent to a blood bank for further analysis to determine the genetic type of Thalassemia.

Doctor asked us to get admitted and get her transfused with PRBC (Packed Reb Blood Cells), we admitted her on 29th and got her transfused. The next day her HB level went to 7.5, which Doctor felt is not sufficient and recommended for another unit of transfusion to get the HB levels above 10 post which we can get discharged.

On the morning hours 31st March 2017 around 9 AM IST, she complained severe headache and started vomiting and she had a seizure episode on her right side. A MRI was done on the brain which revealed an intracranial haemorrhage on the left side of the brain. She was immediately rushed to ICU and was kept on observation. Doctor’s advice to us was to wait and watch. Her right side was paralysed and she lost her speech also.

On 1st April 2017 around 5 PM IST, there was another seizure episode and immediately a CT scan was performed in the brain to rule out further haemorrhage, luckily there were no further damage to the brain, it was old haemorrhage which was causing a stress to the brain. Doctors told us we may lose her, if the stress on the brain is not reduced. This hospital didn’t have a Neuro Surgeon for Paediatric ward, so after a high argument with ICU Doctors, a Neuro Surgeon - Dr Santhosh Mohan Rao from “Kanchi Kamakoti Childs Trust Hospital” was rushed in to examine my Child.

Dr Santhosh rushed to Mehta hospital and examined my child and informed us that Dhanya can be saved by performing Craniotomy - is a surgical operation in which a bone flap is temporarily removed from the skull to access the brain. We had no choice as we were losing precious time, we complied. Surgery was successfully performed on 1st April 2017 mid night and Dhanya was put in Ventilator for next 72 hours. The bone flap which was removed was put on the upper layer of her stomach to ensure that the skull bone is well preserved. The craniotomy closure was planned after two months, to enable Dhanya to recover from right side paralysis.

After a week, Dhanya’s condition improved and she was moved from ICU to HDU (High Dependency Unit) & later to a ward. Every day physiotherapy was given to restore movements for her right side limbs.  She was on bi-hourly NG liquid feed (tube feed via nose). Dhanya regained speech while she was in hospital. At last we got discharged on 24th April 2017.

Through continuous physio therapy , Dhanya slowly regained movements on her right hand side. Parallelly, her HB levels were checked and whenever it went below 8 mark , transfusion was given. There was a setback on Craniotomy as her HB levels saw rapid break down. As per Mehta Doctor advice, Dr. Revathi Raj – Leading Haematologist - Apollo Hospital was consulted. Basis the guidance from Dr. Revathi Raj Dhanya was given immune suppression therapy for 3 weeks to avoid rapid HB break down. HB remained stable and Craniotomy closure was completed successfully on 28th June 2017.

Post craniotomy closure, we had started following up with Dr. Deenadayalan M - a Paediatric Haematologist and Oncologist, Chennai @ Gleneagles Global Hospitals, as we had many bitter experience with Mehta hospitals. Dhanya was on regular transfusion since then, every time she has to be transfused with “Leukodepleted Irradiated Blood” to avoid infections and rejections by her immune system. The period of transfusion was tri-weekly.

During Oct’17 HB levels started falling down rapidly due to Hypersplenism – an overactive spleen which destroys blood cells too early and quickly. The tri-weekly transfusion became, bi-weekly and weekly, which was a danger sign, as every time post transfusion, Iron levels in the blood would increase, increased iron will get deposited in Heart, Liver, Kidney which would impact these organs. Hence it was decided to remove her spleen. Necessary vaccinations were given to her to avoid risk of infections, as spleen is important to protect the body from bacterial and viral infections.

On 27th December 2017, Splenectomy was performed in Kanchi Kamakoti Childs Trust Hospital by Dr. S. Namachivayam – renowned Paediatric surgeon. Post hospital stay for 6 days, Dhanya was discharged on 2nd Jan 2018. Since then her condition is stable, her HB levels remained stable, no rapid break down seen. Now she is on a monthly transfusion.

BMT is the final cure for Thalassemia. Bone marrow is spongy tissue inside our body which produces blood cells. During BMT Chemotherapy will be given to destroy defective Bone marrow and healthy bone marrow received from the matching donor will be injected to the recipient. These new stem cells will get settled in the body and start producing normal blood cells.

For Bone Marrow the HLA matching is very critical. Human leukocyte antigen (HLA) typing is used to match patients and donors for bone marrow. HLA are proteins -- or markers -- found on most cells in your body. Your immune system uses these markers to recognize which cells belong in your body and which do not. This has to be a perfect 10/10 match to have a smooth and successful BMT. A 10/10 is called Haematopoietic Stem Cell Transplant, full match is found usually with a sibling (25% chance) or from parents (5% chance).

BMT is a 6 week procedure where the patient need to be treated in a highly sterile environment with high quality medicines. The only risk associated with BMT is Graft Versus Host Disease (GVHD) where the recipient body

BMT can be performed by the following match:

Unfortunately Dhanya neither have a sibling nor perfect match with us, myself (Father) being 6/10 match and Supriya (Mother) being 5/10 match. So at present Haploid Transplant is the solution. But Doctors have told us to wait for few months to see whether we get an unrelated full match from blood bank registries.

We are eagerly waiting to hear from doctors on right HLA matching.

Have spent close to 17 lakhs till now and need all the help to manage the fund requirement for BMT, which is a costlier procedure. Thalassemia being a genetic disorder doesn’t get covered under Insurance, so all along the funds had to be managed by self.

Every time I come closer to the date of a transfusion, I fear that I will lose my daughter. I can't imagine that. It makes me feel like the worst father in the world. Giving up is not an option right now, we remain highly optimistic about HLA matching & pooling of funds from different sources. We are determined to provide the best future for our daughter.

Seeking your kind help in getting funds pooled from your known resources. This will be of an immense aid to us.

You are sending a message to
Rajani
Go back 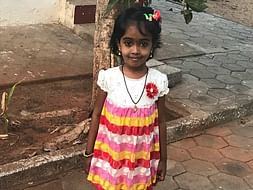