4-Year-Old’s Vital Organs Can Shut Down Any Minute, Needs Urgent Help | Milaap
This is a supporting campaign. Contributions made to this campaign will go towards the main campaign.
Milaap will not charge any fee on your donation to this campaign. 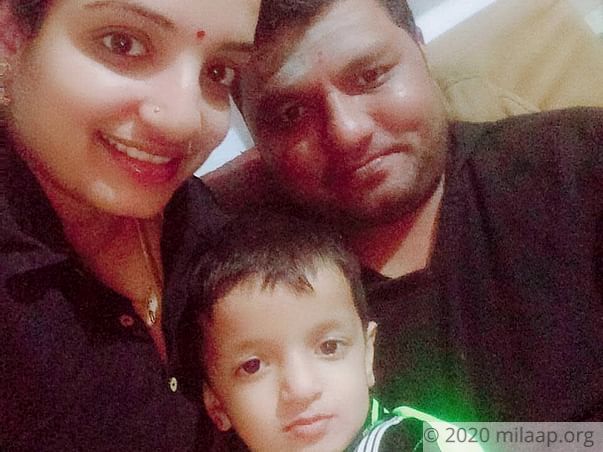 In the four walls of a secluded ward, Dakshith (4) spends his days listening to stories about adventures and bravery from his father, Sudhinder. When he’s not listening to them, he’s making up his own. Dakshith can talk your ears off – whether it’s about his favourite toy car or the time he saw a snake in his ooru (hometown). When the nurse comes to give him an injection he promptly says “bye-bye, I don’t want it” and goes back to talking to himself. He’s endearing and lovable – but Dakshith’s body is giving up on him. He has just 4 days left to get a bone marrow transplant.

Dakshith has one of the rarest autoimmune diseases. It occurs in about 2-3 individuals in a lakh. The first hospital that they took him to even said that they had only treated one other child with this disease. His condition is critical - at any moment, an infection can affect his vital organs and kill him.

Last year in August, during Ganesh Chaturthi, little Dakshith fell sick. This was not a mild fever. His temperature was at 104 degrees. Sudhinder and Sirisha were worried sick. They took him to a nearby hospital where he was admitted in the ICU. He had a 104-degree fever for the next 25 days. This was just the beginning of his fight. The distraught parents soon found out that their son had an extremely rare disease, one that is damaging is vital organs.

The grave diagnosis – his vital organs and life are in danger

“He has gone through chemotherapy and numerous blood tests. It’s been a gruelling 6 months for him. But none of this is enough for him. His liver had gotten enlarged, his kidney is affected. A bone marrow transplant is the only cure – this is his final chance to survive this disease.” - Sudhinder

A dead-end – time is running out, he has just 4 days left

Dakshith has been in the bone marrow transplant ward since Saturday with his father. He remains blissfully unaware about his dangerous disease and continues to play with his toy he has – as any 4-year-old would. With just 4 days left for his transplant, Sudhinder and Sirisha are more worried than ever – they have no money left with them.

“We’ve spent 15 lakhs on his treatment so far. It’s too much for a middle-class man like me. I work in a desktop repair shop, but for more than a month now, I haven’t gone for work. My wife also had to quit her job as HR in a company to look after Dakshith.” - Sudhinder

Dakshith’s disease is so dangerous and unpredictable that even a small infection can now be fatal for him. The child who had never fallen sick or been to a hospital till he was 2, is now confined to it. There’s nowhere else he can go – everything is dangerous and fatal for him until he gets a bone marrow transplant. He has just 4 days left. 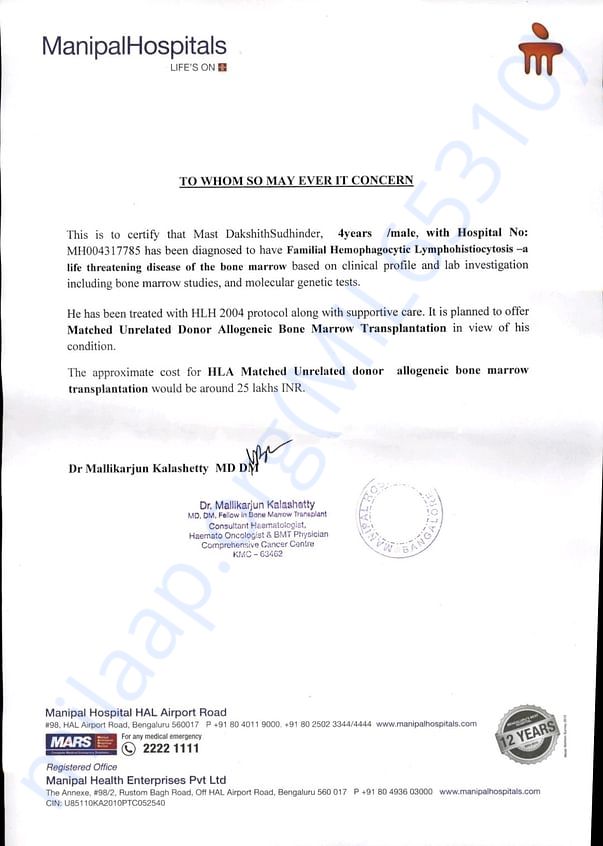 Master Dakshith is doing well. He has been discharged from the hospital and is at home now . HE is recovering slowly and is responding to the treatment.

Thank you all for your immense love showered towards our campaign.

Dakshith is undergoing bone marrow transplant on 19th of February at Manipal Hospital, Bengaluru. We found the donor from hospital itself and the person is from Germany. I will post an update after the transplant is completed on his health status.

Thank you all! Please continue to share the campaign and help us raise more funds.

Scan & donate with any app
check_circle_outline Download payment receipt
Report fundraiser
See how thousands are crowdfunding for their causes on Milaap
Rs.2,500 raised 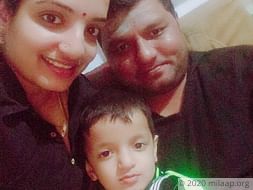